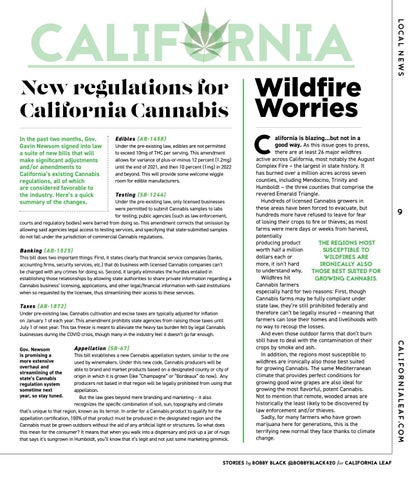 New regulations for California Cannabis In the past two months, Gov. Gavin Newsom signed into law a suite of new bills that will make significant adjustments and/or amendments to California’s existing Cannabis regulations, all of which are considered favorable to the industry. Here’s a quick summary of the changes.

Edibles ( AB-1458) Under the pre-existing law, edibles are not permitted to exceed 10mg of THC per serving. This amendment allows for variance of plus-or-minus 12 percent (1.2mg) until the end of 2021, and then 10 percent (1mg) in 2022 and beyond. This will provide some welcome wiggle room for edible manufacturers.

Under the pre-existing law, only licensed businesses were permitted to submit Cannabis samples to labs for testing; public agencies (such as law enforcement, courts and regulatory bodies) were barred from doing so. This amendment corrects that omission by allowing said agencies legal access to testing services, and specifying that state-submitted samples do not fall under the jurisdiction of commercial Cannabis regulations.

Banking (AB-1525) This bill does two important things: First, it states clearly that financial service companies (banks, accounting firms, security services, etc.) that do business with licensed Cannabis companies can’t be charged with any crimes for doing so. Second, it largely eliminates the hurdles entailed in establishing those relationships by allowing state authorities to share private information regarding a Cannabis business’ licensing, applications, and other legal/financial information with said institutions when so requested by the licensee, thus streamlining their access to these services.

Taxes (AB-1872) Under pre-existing law, Cannabis cultivation and excise taxes are typically adjusted for inflation on January 1 of each year. This amendment prohibits state agencies from raising those taxes until July 1 of next year. This tax freeze is meant to alleviate the heavy tax burden felt by legal Cannabis businesses during the COVID crisis, though many in the industry feel it doesn’t go far enough.

This bill establishes a new Cannabis appellation system, similar to the one used by winemakers. Under this new code, Cannabis producers will be able to brand and market products based on a designated county or city of origin in which it is grown (like “Champagne” or “Bordeaux” do now). Any producers not based in that region will be legally prohibited from using that appellation. But the law goes beyond mere branding and marketing – it also recognizes the specific combination of soil, sun, topography and climate that’s unique to that region, known as its terroir. In order for a Cannabis product to qualify for the appellation certification, 100% of that product must be produced in the designated region and the Cannabis must be grown outdoors without the aid of any artificial light or structures. So what does this mean for the consumer? It means that when you walk into a dispensary and pick up a jar of nugs that says it’s sungrown in Humboldt, you’ll know that it’s legit and not just some marketing gimmick.

alifornia is blazing...but not in a good way. As this issue goes to press,

there are at least 26 major wildfires active across California, most notably the August Complex Fire – the largest in state history. It has burned over a million acres across seven counties, including Mendocino, Trinity and Humboldt – the three counties that comprise the revered Emerald Triangle. Hundreds of licensed Cannabis growers in these areas have been forced to evacuate, but hundreds more have refused to leave for fear of losing their crops to fire or thieves; as most farms were mere days or weeks from harvest, potentially producing product THE REGIONS MOST worth half a million SUSCEPTIBLE TO dollars each or WILDFIRES ARE more, it isn’t hard IRONICALLY ALSO to understand why. THOSE BEST SUITED FOR Wildfires hit GROWING CANNABIS. Cannabis farmers especially hard for two reasons: First, though Cannabis farms may be fully compliant under state law, they’re still prohibited federally and therefore can’t be legally insured – meaning that farmers can lose their homes and livelihoods with no way to recoup the losses. And even those outdoor farms that don’t burn still have to deal with the contamination of their crops by smoke and ash. In addition, the regions most susceptible to wildfires are ironically also those best suited for growing Cannabis. The same Mediterranean climate that provides perfect conditions for growing good wine grapes are also ideal for growing the most flavorful, potent Cannabis. Not to mention that remote, wooded areas are historically the least likely to be discovered by law enforcement and/or thieves. Sadly, for many farmers who have grown marijuana here for generations, this is the terrifying new normal they face thanks to climate change.

Gov. Newsom is promising a more extensive overhaul and streamlining of the state’s Cannabis regulation system sometime next year, so stay tuned.