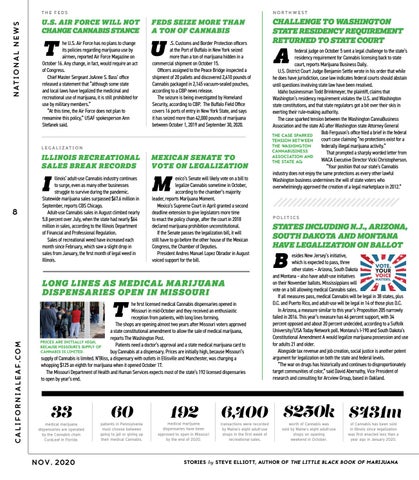 he U.S. Air Force has no plans to change its policies regarding marijuana use by airmen, reported Air Force Magazine on October 16. Any change, in fact, would require an act of Congress. Chief Master Sergeant JoAnne S. Bass’ office released a statement that “although some state and local laws have legalized the medicinal and recreational use of marijuana, it is still prohibited for use by military members.” “At this time, the Air Force does not plan to reexamine this policy,” USAF spokesperson Ann Stefanek said.

FEDS SEIZE MORE THAN A TON OF CANNABIS

.S. Customs and Border Protection officers at the Port of Buffalo in New York seized more than a ton of marijuana hidden in a commercial shipment on October 15. Officers assigned to the Peace Bridge inspected a shipment of 20 pallets and discovered 2,410 pounds of Cannabis packaged in 2,145 vacuum-sealed pouches, according to a CBP news release. The seizure is being investigated by Homeland Security, according to CBP. The Buffalo Field Office covers 16 ports of entry in New York State, and says it has seized more than 42,000 pounds of marijuana between October 1, 2019 and September 30, 2020.

MEXICAN SENATE TO VOTE ON LEGALIZATION

llinois’ adult-use Cannabis industry continues to surge, even as many other businesses struggle to survive during the pandemic. Statewide marijuana sales surpassed $67.6 million in September, reports CBS Chicago. Adult-use Cannabis sales in August climbed nearly 5.8 percent over July, when the state had nearly $64 million in sales, according to the Illinois Department of Financial and Professional Regulation. Sales of recreational weed have increased each month since February, which saw a slight drop in sales from January, the first month of legal weed in Illinois.

exico’s Senate will likely vote on a bill to legalize Cannabis sometime in October, according to the chamber’s majority leader, reports Marijuana Moment. Mexico’s Supreme Court in April granted a second deadline extension to give legislators more time to enact the policy change, after the court in 2018 declared marijuana prohibition unconstitutional. If the Senate passes the legalization bill, it will still have to go before the other house of the Mexican Congress, the Chamber of Deputies. President Andres Manuel Lopez Obrador in August voiced support for the bill.

he first licensed medical Cannabis dispensaries opened in Missouri in mid-October and they received an enthusiastic reception from patients, with long lines forming. The shops are opening almost two years after Missouri voters approved a state constitutional amendment to allow the sale of medical marijuana, reports The Washington Post. PRICES ARE INITIALLY HIGH, Patients need a doctor’s approval and a state medical marijuana card to BECAUSE MISSOURI’S SUPPLY OF CANNABIS IS LIMITED. buy Cannabis at a dispensary. Prices are initially high, because Missouri’s supply of Cannabis is limited. N’Bliss, a dispensary with outlets in Ellisville and Manchester, was charging a whopping $125 an eighth for marijuana when it opened October 17. The Missouri Department of Health and Human Services expects most of the state’s 192 licensed dispensaries to open by year’s end.

medical marijuana dispensaries are operated by the Cannabis chain CuraLeaf in Florida.

patients in Pennsylvania must choose between going to jail or giving up their medical Cannabis.

medical marijuana dispensaries have been approved to open in Missouri by the end of 2020.

federal judge on October 5 sent a legal challenge to the state’s residency requirement for Cannabis licensing back to state court, reports Marijuana Business Daily. U.S. District Court Judge Benjamin Settle wrote in his order that while he does have jurisdiction, case law indicates federal courts should abstain until questions involving state law have been resolved. Idaho businessman Todd Brinkmeyer, the plaintiff, claims that Washington’s residency requirement violates the U.S. and Washington state constitutions, and that state regulators got a bit over their skis in exerting their rule-making authority. The case sparked tension between the Washington CannaBusiness Association and the state AG after Washington state Attorney General Bob Ferguson’s office filed a brief in the federal THE CASE SPARKED court case claiming “no protections exist for a TENSION BETWEEN THE WASHINGTON federally illegal marijuana activity.” CANNABUSINESS That prompted a sharply worded letter from ASSOCIATION AND WACA Executive Director Vicki Christopherson. THE STATE AG “Your position that our state’s Cannabis industry does not enjoy the same protections as every other lawful Washington business undermines the will of state voters who overwhelmingly approved the creation of a legal marketplace in 2012.”

STATES INCLUDING N.J., ARIZONA, SOUTH DAKOTA AND MONTANA HAVE LEGALIZATION ON BALLOT

esides New Jersey’s initiative, which is expected to pass, three other states – Arizona, South Dakota and Montana – also have adult-use initiatives on their November ballots. Mississippians will vote on a bill allowing medical Cannabis sales. If all measures pass, medical Cannabis will be legal in 38 states, plus D.C. and Puerto Rico, and adult-use will be legal in 14 of those plus D.C. In Arizona, a measure similar to this year’s Proposition 205 narrowly failed in 2016. This year’s measure has 46 percent support, with 34 percent opposed and about 20 percent undecided, according to a Suffolk University/USA Today Network poll. Montana’s I-190 and South Dakota’s Constitutional Amendment A would legalize marijuana possession and use for adults 21 and older. Alongside tax revenue and job creation, social justice is another potent argument for legalization on both the state and federal levels. “The war on drugs has historically and continues to disproportionately target communities of color,” said David Abernathy, Vice President of research and consulting for Arcview Group, based in Oakland.

worth of Cannabis was sold by Maine’s eight adult-use shops on opening weekend in October.

of Cannabis has been sold in Illinois since legalization was first enacted less than a year ago in January 2020.

STORIES by STEVE ELLIOTT, AUTHOR OF THE LITTLE BLACK BOOK OF MARIJUANA