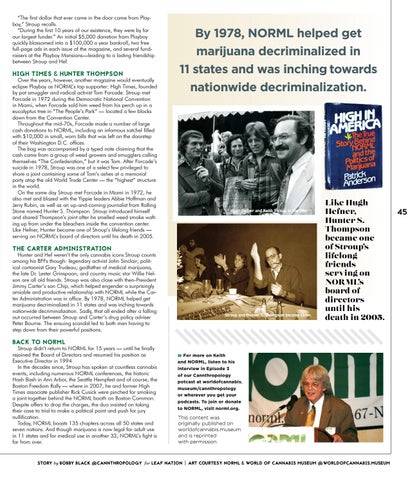 “The first dollar that ever came in the door came from Playboy,” Stroup recalls. “During the first 10 years of our existence, they were by far our largest funder.” An initial $5,000 donation from Playboy quickly blossomed into a $100,000 a year bankroll, two free full-page ads in each issue of the magazine, and several fundraisers at the Playboy Mansions—leading to a lasting friendship between Stroup and Hef.

Over the years, however, another magazine would eventually eclipse Playboy as NORML’s top supporter: High Times, founded by pot smuggler and radical activist Tom Forcade. Stroup met Forcade in 1972 during the Democratic National Convention in Miami, when Forcade sold him weed from his perch up in a eucalyptus tree in “The People’s Park” –– located a few blocks down from the Convention Center. Throughout the mid-70s, Forcade made a number of large cash donations to NORML, including an infamous satchel filled with $10,000 in small, worn bills that was left on the doorstep of their Washington D.C. offices. The bag was accompanied by a typed note claiming that the cash came from a group of weed growers and smugglers calling themselves “The Confederation,” but it was Tom. After Forcade’s suicide in 1978, Stroup was one of a select few privileged to share a joint containing some of Tom’s ashes at a memorial party atop the old World Trade Center –– the “highest” structure in the world. On the same day Stroup met Forcade in Miami in 1972, he also met and blazed with the Yippie leaders Abbie Hoffman and Jerry Rubin, as well as an up-and-coming journalist from Rolling Stone named Hunter S. Thompson. Stroup introduced himself and shared Thompson’s joint after he smelled weed smoke wafting up from under the bleachers inside the convention center. Like Hefner, Hunter became one of Stroup’s lifelong friends –– serving on NORML’s board of directors until his death in 2005.

By 1978, NORML helped get marijuana decriminalized in 11 states and was inching towards nationwide decriminalization.

Hugh Hefner and Keith Stroup in the 70s.

Hunter and Hef weren’t the only cannabis icons Stroup counts among his BFFs though: legendary activist John Sinclair; political cartoonist Gary Trudeau; godfather of medical marijuana, the late Dr. Lester Grinspoon; and country music star Willie Nelson are all old friends. Stroup was also close with then-President Jimmy Carter’s son Chip, which helped engender a surprisingly amiable and productive relationship with NORML while the Carter Administration was in office. By 1978, NORML helped get marijuana decriminalized in 11 states and was inching towards nationwide decriminalization. Sadly, that all ended after a falling out occurred between Stroup and Carter’s drug policy adviser Peter Bourne. The ensuing scandal led to both men having to step down from their powerful positions.

Like Hugh Hefner, Hunter S. Thompson became one of Stroup’s lifelong friends –– serving on NORML’s board of directors until his death in 2005.

Stroup didn’t return to NORML for 15 years –– until he finally rejoined the Board of Directors and resumed his position as Executive Director in 1994. In the decades since, Stroup has spoken at countless cannabis events, including numerous NORML conferences, the historic Hash Bash in Ann Arbor, the Seattle Hempfest and of course, the Boston Freedom Rally –– where in 2007, he and former High Times associate publisher Rick Cusick were pinched for smoking a joint together behind the NORML booth on Boston Common. Despite offers to drop the charges, the duo insisted on taking their case to trial to make a political point and push for jury nullification. Today, NORML boasts 135 chapters across all 50 states and seven nations. And though marijuana is now legal for adult use in 11 states and for medical use in another 33, NORML’s fight is far from over.

» For more on Keith

and NORML, listen to his interview in Episode 3 of our Cannthropology potcast at worldofcannabis. museum/cannthropology or wherever you get your podcasts. To join or donate to NORML, visit norml.org.

This content was originally published on worldofcannabis.museum and is reprinted with permission.