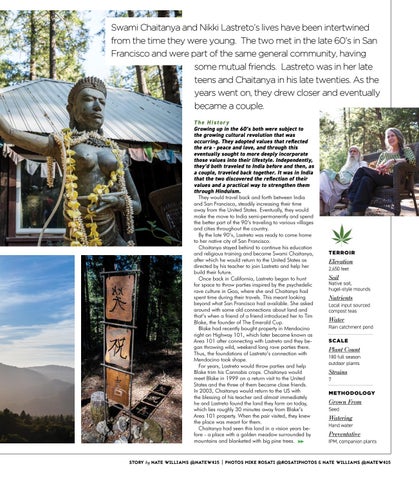 Swami Chaitanya and Nikki Lastreto’s lives have been intertwined from the time they were young. The two met in the late 60’s in San Francisco and were part of the same general community, having some mutual friends. Lastreto was in her late teens and Chaitanya in his late twenties. As the years went on, they drew closer and eventually became a couple. The History Growing up in the 60’s both were subject to the growing cultural revolution that was occurring. They adopted values that reflected the era - peace and love, and through this eventually sought to more deeply incorporate those values into their lifestyle. Independently, they’d both traveled to India before and then, as a couple, traveled back together. It was in India that the two discovered the reflection of their values and a practical way to strengthen them through Hinduism. They would travel back and forth between India and San Francisco, steadily increasing their time away from the United States. Eventually, they would make the move to India semi-permanently and spend the better part of the 90’s traveling to various villages and cities throughout the country. By the late 90’s, Lastreto was ready to come home to her native city of San Francisco. Chaitanya stayed behind to continue his education and religious training and became Swami Chaitanya, after which he would return to the United States as directed by his teacher to join Lastreto and help her build their future. Once back in California, Lastreto began to hunt for space to throw parties inspired by the psychedelic rave culture in Goa, where she and Chaitanya had spent time during their travels. This meant looking beyond what San Francisco had available. She asked around with some old connections about land and that’s when a friend of a friend introduced her to Tim Blake, the founder of The Emerald Cup. Blake had recently bought property in Mendocino right on Highway 101, which later became known as Area 101 after connecting with Lastreto and they began throwing wild, weekend long rave parties there. Thus, the foundations of Lastreto’s connection with Mendocino took shape. For years, Lastreto would throw parties and help Blake trim his Cannabis crops. Chaitanya would meet Blake in 1999 on a return visit to the United States and the three of them became close friends. In 2003, Chaitanya would return to the US with the blessing of his teacher and almost immediately he and Lastreto found the land they farm on today, which lies roughly 30 minutes away from Blake’s Area 101 property. When the pair visited, they knew the place was meant for them. Chaitanya had seen this land in a vision years before - a place with a golden meadow surrounded by mountains and blanketed with big pine trees. >>