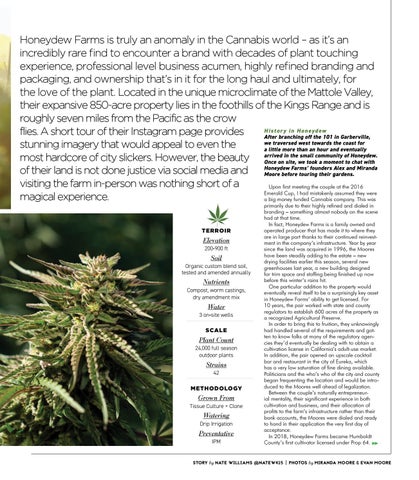 Honeydew Farms is truly an anomaly in the Cannabis world – as it’s an incredibly rare find to encounter a brand with decades of plant touching experience, professional level business acumen, highly refined branding and packaging, and ownership that’s in it for the long haul and ultimately, for the love of the plant. Located in the unique microclimate of the Mattole Valley, their expansive 850-acre property lies in the foothills of the Kings Range and is roughly seven miles from the Pacific as the crow H i s t o r y i n H o n eyd e w flies. A short tour of their Instagram page provides After branching off the 101 in Garberville, we traversed west towards the coast for stunning imagery that would appeal to even the a little more than an hour and eventually in the small community of Honeydew. most hardcore of city slickers. However, the beauty arrived Once on site, we took a moment to chat with Farms’ founders Alex and Miranda of their land is not done justice via social media and Honeydew Moore before touring their gardens. visiting the farm in-person was nothing short of a Upon first meeting the couple at the 2016 Emerald Cup, I had mistakenly assumed they were magical experience. a big money funded Cannabis company. This was TERROIR

primarily due to their highly refined and dialed in branding – something almost nobody on the scene had at that time. In fact, Honeydew Farms is a family owned and operated producer that has made it to where they are in large part thanks to their continued reinvestment in the company’s infrastructure. Year by year since the land was acquired in 1996, the Moores have been steadily adding to the estate – new drying facilities earlier this season, several new greenhouses last year, a new building designed for trim space and staffing being finished up now before this winter’s rains hit. One particular addition to the property would eventually reveal itself to be a surprisingly key asset in Honeydew Farms’ ability to get licensed. For 10 years, the pair worked with state and county regulators to establish 600 acres of the property as a recognized Agricultural Preserve. In order to bring this to fruition, they unknowingly had handled several of the requirements and gotten to know folks at many of the regulatory agencies they’d eventually be dealing with to obtain a cultivation license in California’s adult-use market. In addition, the pair opened an upscale cocktail bar and restaurant in the city of Eureka, which has a very low saturation of fine dining available. Politicians and the who’s who of the city and county began frequenting the location and would be introduced to the Moores well ahead of legalization. Between the couple’s naturally entrepreneurial mentality, their significant experience in both cultivation and business, and their allocation of profits to the farm’s infrastructure rather than their bank accounts, the Moores were dialed and ready to hand in their application the very first day of acceptance. In 2018, Honeydew Farms became Humboldt County’s first cultivator licensed under Prop 64. >>