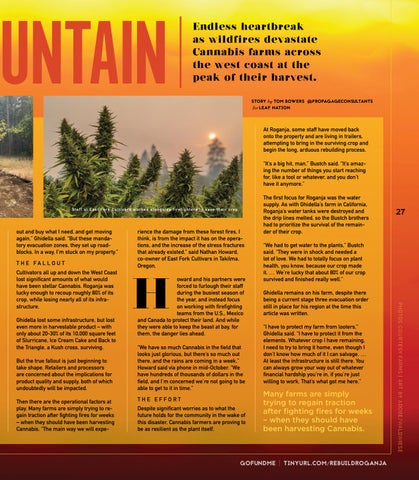 Endless heartbreak as wildfires devastate Cannabis farms across the west coast at the peak of their harvest. STORY by TOM BOWERS \@PROPAGAGECONSULTANTS for LEAF NATION

At Roganja, some staff have moved back onto the property and are living in trailers, attempting to bring in the surviving crop and begin the long, arduous rebuilding process. “It’s a big hit, man,” Bustch said. “It’s amazing the number of things you start reaching for, like a tool or whatever, and you don’t have it anymore.”

Staff at East Fork Cultivars worked alongside firefighters to save their crop.

out and buy what I need, and get moving again,” Ghidella said. “But these mandatory evacuation zones, they set up roadblocks. In a way, I’m stuck on my property.” THE FALLOUT

Ghidella lost some infrastructure, but lost even more in harvestable product – with only about 20-30% of its 10,000 square feet of Slurricane, Ice Cream Cake and Back to the Triangle, a Kush cross, surviving. But the true fallout is just beginning to take shape. Retailers and processors are concerned about the implications for product quality and supply, both of which undoubtedly will be impacted. Then there are the operational factors at play. Many farms are simply trying to regain traction after fighting fires for weeks – when they should have been harvesting Cannabis. “The main way we will expe-

oward and his partners were forced to furlough their staff during the busiest season of the year, and instead focus on working with firefighting teams from the U.S., Mexico and Canada to protect their land. And while they were able to keep the beast at bay, for them, the danger lies ahead. “We have so much Cannabis in the field that looks just glorious, but there’s so much out there, and the rains are coming in a week,” Howard said via phone in mid-October. “We have hundreds of thousands of dollars in the field, and I’m concerned we’re not going to be able to get to it in time.” THE EFFORT Despite significant worries as to what the future holds for the community in the wake of this disaster, Cannabis farmers are proving to be as resilient as the plant itself.

“We had to get water to the plants,” Bustch said. “They were in shock and needed a lot of love. We had to totally focus on plant health, you know, because our crop made it. … We’re lucky that about 80% of our crop survived and finished really well.” Ghidella remains on his farm, despite there being a current stage three evacuation order still in place for his region at the time this article was written. “I have to protect my farm from looters,” Ghidella said. “I have to protect it from the elements. Whatever crop I have remaining, I need to try to bring it home, even though I don’t know how much of it I can salvage. … At least the infrastructure is still there. You can always grow your way out of whatever financial hardship you’re in, if you’re just willing to work. That’s what got me here.”

Many farms are simply trying to regain traction after fighting fires for weeks – when they should have been harvesting Cannabis.

Cultivators all up and down the West Coast lost significant amounts of what would have been stellar Cannabis. Roganja was lucky enough to recoup roughly 80% of its crop, while losing nearly all of its infrastructure.

rience the damage from these forest fires, I think, is from the impact it has on the operations, and the increase of the stress fractures that already existed,” said Nathan Howard, co-owner of East Fork Cultivars in Takilma, Oregon.

The first focus for Roganja was the water supply. As with Ghidella’s farm in California, Roganja’s water tanks were destroyed and the drip lines melted, so the Bustch brothers had to prioritize the survival of the remainder of their crop.