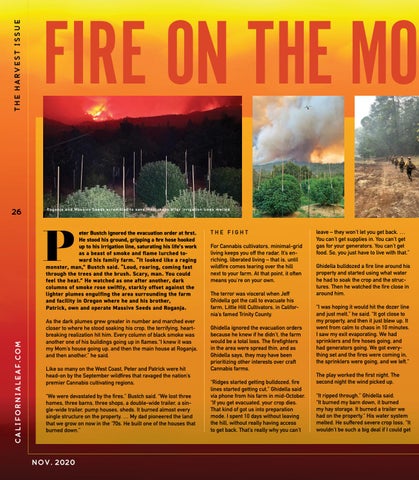 FIRE ON THE MOU Roganja and Massive Seeds scrambled to save their crops after irrigation lines melted.

eter Bustch ignored the evacuation order at first. He stood his ground, gripping a fire hose hooked up to his irrigation line, saturating his life’s work as a beast of smoke and flame lurched toward his family farm. “It looked like a raging monster, man,” Bustch said. “Loud, roaring, coming fast through the trees and the brush. Scary, man. You could feel the heat.” He watched as one after another, dark columns of smoke rose swiftly, starkly offset against the lighter plumes engulfing the area surrounding the farm and facility in Oregon where he and his brother, Patrick, own and operate Massive Seeds and Roganja. As the dark plumes grew greater in number and marched ever closer to where he stood soaking his crop, the terrifying, heartbreaking realization hit him. Every column of black smoke was another one of his buildings going up in flames.“I knew it was my Mom’s house going up, and then the main house at Roganja, and then another,” he said. Like so many on the West Coast, Peter and Patrick were hit head-on by the September wildfires that ravaged the nation’s premier Cannabis cultivating regions. “We were devastated by the fires,” Bustch said. “We lost three homes, three barns, three shops, a double-wide trailer, a single-wide trailer, pump houses, sheds. It burned almost every single structure on the property. … My dad pioneered the land that we grow on now in the ‘70s. He built one of the houses that burned down.”

THE FIGHT For Cannabis cultivators, minimal-grid living keeps you off the radar. It’s enriching, liberated living – that is, until wildfire comes tearing over the hill next to your farm. At that point, it often means you’re on your own. The terror was visceral when Jeff Ghidella got the call to evacuate his farm, Little Hill Cultivators, in California’s famed Trinity County. Ghidella ignored the evacuation orders because he knew if he didn’t, the farm would be a total loss. The firefighters in the area were spread thin, and as Ghidella says, they may have been prioritizing other interests over craft Cannabis farms. “Ridges started getting bulldozed, fire lines started getting cut,” Ghidella said via phone from his farm in mid-October. “If you get evacuated, your crop dies. That kind of got us into preparation mode. I spent 10 days without leaving the hill, without really having access to get back. That’s really why you can’t

leave – they won’t let you get back. … You can’t get supplies in. You can’t get gas for your generators. You can’t get food. So, you just have to live with that.” Ghidella bulldozed a fire line around his property and started using what water he had to soak the crop and the structures. Then he watched the fire close in around him. “I was hoping it would hit the dozer line and just melt,” he said. “It got close to my property, and then it just blew up. It went from calm to chaos in 10 minutes. I saw my exit evaporating. We had sprinklers and fire hoses going, and had generators going. We got everything set and the fires were coming in, the sprinklers were going, and we left.” The play worked the first night. The second night the wind picked up. “It ripped through,” Ghidella said. “It burned my barn down, it burned my hay storage. It burned a trailer we had on the property.” His water system melted. He suffered severe crop loss. “It wouldn’t be such a big deal if I could get