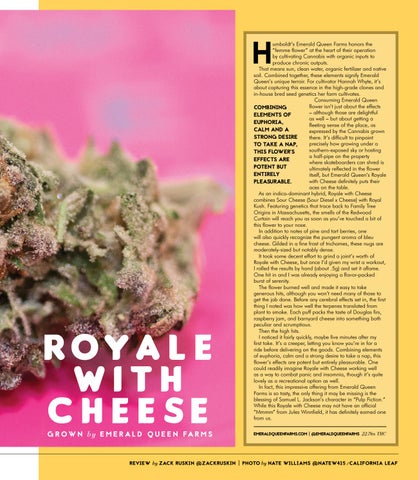 umboldt’s Emerald Queen Farms honors the “femme flower” at the heart of their operation by cultivating Cannabis with organic inputs to produce chronic outputs. That means sun, clean water, organic fertilizer and native soil. Combined together, these elements signify Emerald Queen’s unique terroir. For cultivator Hannah Whyte, it’s about capturing this essence in the high-grade clones and in-house bred seed genetics her farm cultivates. Consuming Emerald Queen flower isn’t just about the effects COMBINING – although those are delightful ELEMENTS OF as well – but about getting a EUPHORIA, fleeting sense of the place, as CALM AND A expressed by the Cannabis grown STRONG DESIRE there. It’s difficult to pinpoint precisely how growing under a TO TAKE A NAP, southern-exposed sky or hosting THIS FLOWER’S a half-pipe on the property EFFECTS ARE where skateboarders can shred is POTENT BUT ultimately reflected in the flower ENTIRELY itself, but Emerald Queen’s Royale with Cheese definitely puts their PLEASURABLE. aces on the table. As an indica-dominant hybrid, Royale with Cheese combines Sour Cheese (Sour Diesel x Cheese) with Royal Kush. Featuring genetics that trace back to Family Tree Origins in Massachusetts, the smells of the Redwood Curtain will reach you as soon as you’ve touched a bit of this flower to your nose. In addition to notes of pine and tart berries, one will also quickly recognize the pungent aroma of bleu cheese. Gilded in a fine frost of trichomes, these nugs are moderately-sized but notably dense. It took some decent effort to grind a joint’s worth of Royale with Cheese, but once I’d given my wrist a workout, I rolled the results by hand (about .5g) and set it aflame. One hit in and I was already enjoying a flavor-packed burst of serenity. The flower burned well and made it easy to take generous hits, although you won’t need many of those to get the job done. Before any cerebral effects set in, the first thing I noted was how well the terpenes translated from plant to smoke. Each puff packs the taste of Douglas firs, raspberry jam, and barnyard cheese into something both peculiar and scrumptious. Then the high hits. I noticed it fairly quickly, maybe five minutes after my first toke. It’s a creeper, letting you know you’re in for a ride before delivering on the goods. Combining elements of euphoria, calm and a strong desire to take a nap, this flower’s effects are potent but entirely pleasurable. One could readily imagine Royale with Cheese working well as a way to combat panic and insomnia, though it’s quite lovely as a recreational option as well. In fact, this impressive offering from Emerald Queen Farms is so tasty, the only thing it may be missing is the blessing of Samuel L. Jackson’s character in “Pulp Fiction.” While this Royale with Cheese may not have an official “Mmmm” from Jules Winnfield, it has definitely earned one from us.