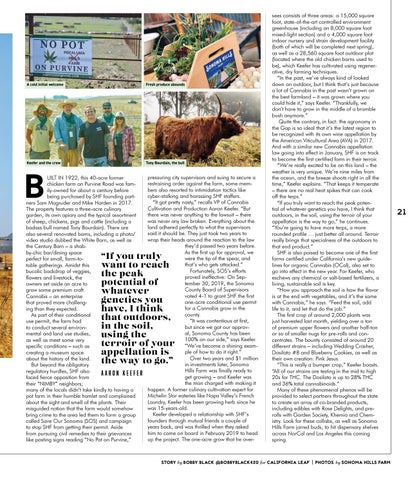 Keefer and the crew

UILT IN 1922, this 40-acre former chicken farm on Purvine Road was family-owned for about a century before being purchased by SHF founding partners Sam Magruder and Mike Harden in 2017. The property features a three-acre culinary garden, its own apiary and the typical assortment of sheep, chickens, pigs and cattle (including a badass bull named Tony Bourdain). There are also several renovated barns, including a photo/ video studio dubbed the White Barn, as well as the Century Barn – a shabby-chic bar/dining space perfect for small, farm-totable gatherings. Amidst this bucolic backdrop of veggies, flowers and livestock, the owners set aside an acre to grow some premium craft Cannabis – an enterprise that proved more challenging than they expected. As part of their conditional use permit, the farm had to conduct several environmental and land use studies, as well as meet some very specific conditions – such as creating a museum space about the history of the land. But beyond the obligatory regulatory hurdles, SHF also aaron keefer faced fierce opposition from their “NIMBY” neighbors; many of the locals didn’t take kindly to having a pot farm in their humble hamlet and complained about the sight and smell of the plants. Their misguided notion that the farm would somehow bring crime to the area led them to form a group called Save Our Sonoma (SOS) and campaign to stop SHF from getting their permit. Aside from pursuing civil remedies to their grievances like posting signs reading “No Pot on Purvine,”

pressuring city supervisors and suing to secure a restraining order against the farm, some members also resorted to intimidation tactics like cyber-stalking and harassing SHF staffers. “It got pretty nasty,” recalls VP of Cannabis Cultivation and Production Aaron Keefer. “But there was never anything to the lawsuit – there was never any law broken. Everything about the land adhered perfectly to what the supervisors said it should be. They just took two years to wrap their heads around the reaction to the law they’d passed two years before. As the first up for approval, we were the tip of the spear, and that’s who gets attacked.” Fortunately, SOS’s efforts proved ineffective: On September 30, 2019, the Sonoma County Board of Supervisors voted 4-1 to grant SHF the first one-acre conditional use permit for a Cannabis grow in the county. “It was contentious at first, but since we got our approval, Sonoma County has been 100% on our side,” says Keefer. “We’ve become a shining example of how to do it right.” Over two years and $1 million in investments later, Sonoma Hills Farm was finally ready to get growing – and Keefer was the man charged with making it happen. A former culinary cultivation expert for Michelin Star eateries like Napa Valley’s French Laundry, Keefer has been growing herb since he was 15-years-old. Keefer developed a relationship with SHF’s founders through mutual friends a couple of years back, and was thrilled when they asked him to come on board in February 2019 to head up the project. The one-acre grow that he over-

“If you truly want to reach the peak potential of whatever genetics you have, I think that outdoors, in the soil, using the terroir of your appellation is the way to go.”

sees consists of three areas: a 15,000 square foot, state-of-the-art controlled environment greenhouse (including an 8,000 square foot mixed-light section) and a 4,000 square foot indoor nursery and strain development facility (both of which will be completed next spring), as well as a 28,560 square foot outdoor plot (located where the old chicken barns used to be), which Keefer has cultivated using regenerative, dry farming techniques. “In the past, we’ve always kind of looked down on outdoor, but I think that’s just because a lot of Cannabis in the past wasn’t grown on the best farmland – it was grown where you could hide it,” says Keefer. “Thankfully, we don’t have to grow in the middle of a bramble bush anymore.” Quite the contrary, in fact: the agronomy in the Gap is so ideal that it’s the latest region to be recognized with its own wine appellation by the American Viticultural Area (AVA) in 2017. And with a similar new Cannabis appellation law going into effect in January, SHF is on track to become the first certified farm in their terroir. “We’re really excited to be on this land – the weather is very unique. We’re nine miles from the ocean, and the breeze shoots right in all the time,” Keefer explains. “That keeps it temperate – there are no real heat spikes that can cook off the terps.” “If you truly want to reach the peak potential of whatever genetics you have, I think that outdoors, in the soil, using the terroir of your appellation is the way to go,” he continues. “You’re going to have more terps, a more rounded profile … just better all around. Terroir really brings that specialness of the outdoors to that end product.” SHF is also poised to become one of the first farms certified under California’s new guidelines for organic Cannabis (OCal), also set to go into effect in the new year. For Keefer, who eschews any chemical or salt-based fertilizers, a living, sustainable soil is key. “How you approach the soil is how the flavor is at the end with vegetables, and it’s the same with Cannabis,” he says. “Feed the soil, add life to it, and let that do the job.” The first crop of around 2,000 plants was just harvested last month, yielding over a ton of premium upper flowers and another half-ton or so of smaller nugs for pre-rolls and concentrates. The bounty consisted of around 20 different strains – including Wedding Crasher, Dosilato #8 and Blueberry Cookies, as well as their own creation: Pink Jesus. “This is really a bumper crop,” Keefer boasts. “All of our strains are testing in the mid to high 20s for THC. The Dosilato is up to 28% THC and 36% total cannabinoids.” Many of these phenomenal phenos will be provided to select partners throughout the state to create an array of co-branded products, including edibles with Rose Delights, and prerolls with Garden Society, Khemia and Chemistry. Look for these collabs, as well as Sonoma Hills Farm jarred buds, to hit dispensary shelves across NorCal and Los Angeles this coming spring.