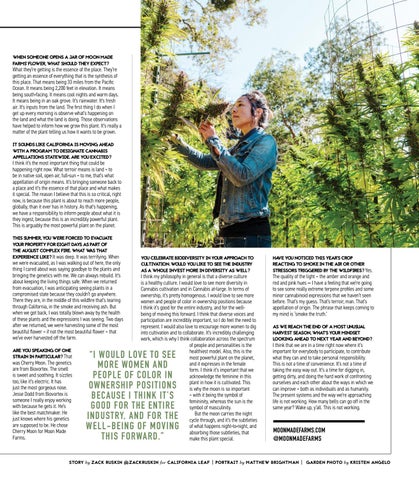 WHEN SOMEONE OPENS A JAR OF MOON MADE FARMS’ FLOWER, WHAT SHOULD THEY EXPECT?

What they’re getting is the essence of the place. They’re getting an essence of everything that is the synthesis of this place. That means being 33 miles from the Pacific Ocean. It means being 2,200 feet in elevation. It means being south-facing. It means cool nights and warm days. It means being in an oak grove. It’s rainwater. It’s fresh air. It’s inputs from the land. The first thing I do when I get up every morning is observe what’s happening on the land and what the land is doing. Those observations have helped to inform how we grow this plant. It’s really a matter of the plant telling us how it wants to be grown. IT SOUNDS LIKE CALIFORNIA IS MOVING AHEAD WITH A PROGRAM TO DESIGNATE CANNABIS APPELLATIONS STATEWIDE. ARE YOU EXCITED?

I think it’s the most important thing that could be happening right now. What terroir means is land – to be in native soil, open air, full-sun – to me, that’s what appellation of origin means. It’s bringing someone back to a place and it’s the essence of that place and what makes it special. The reason I believe that this is so critical, right now, is because this plant is about to reach more people, globally, than it ever has in history. As that’s happening, we have a responsibility to inform people about what it is they ingest, because this is an incredibly powerful plant. This is arguably the most powerful plant on the planet. THIS SUMMER, YOU WERE FORCED TO EVACUATE YOUR PROPERTY FOR EIGHT DAYS AS PART OF THE AUGUST COMPLEX FIRE. WHAT WAS THAT EXPERIENCE LIKE? It was deep. It was terrifying. When

we were evacuated, as I was walking out of here, the only thing I cared about was saying goodbye to the plants and bringing the genetics with me. We can always rebuild. It’s about keeping the living things safe. When we returned from evacuation, I was anticipating seeing plants in a compromised state because they couldn’t go anywhere. There they are, in the middle of this wildfire that’s tearing through California, in the smoke and receiving ash. But when we got back, I was totally blown away by the health of these plants and the expressions I was seeing. Two days after we returned, we were harvesting some of the most beautiful flower – if not the most beautiful flower – that we’ve ever harvested off the farm. ARE YOU SPEAKING OF ONE STRAIN IN PARTICULAR? That

was Cherry Moon. The genetics are from Biovortex. The smell is sweet and soothing. It sizzles too, like it’s electric. It has just the most gorgeous nose. Jesse Dodd from Biovortex is someone I really enjoy working with because he gets it. He’s like the best matchmaker. He just knows where his genetics are supposed to be. He chose Cherry Moon for Moon Made Farms.

YOU CELEBRATE BIODIVERSITY IN YOUR APPROACH TO CULTIVATION. WOULD YOU LIKE TO SEE THE INDUSTRY AS A WHOLE INVEST MORE IN DIVERSITY AS WELL?

I think my philosophy in general is that a diverse culture is a healthy culture. I would love to see more diversity in Cannabis cultivation and in Cannabis at-large. In terms of ownership, it’s pretty homogenous. I would love to see more women and people of color in ownership positions because I think it’s good for the entire industry, and for the wellbeing of moving this forward. I think that diverse voices and participation are incredibly important, so I do feel the need to represent. I would also love to encourage more women to dig into cultivation and to collaborate. It’s incredibly challenging work, which is why I think collaboration across the spectrum of people and personalities is the healthiest model. Also, this is the most powerful plant on the planet, and it expresses in the female form. I think it’s important that we acknowledge the feminine in this plant in how it is cultivated. This is why the moon is so important – with it being the symbol of femininity, whereas the sun is the symbol of masculinity. But the moon carries the night cycle through, and it’s the subtleties of what happens night-to-night, and absorbing those subtleties, that make this plant special.

“I WOULD LOVE TO SEE MORE WOMEN AND PEOPLE OF COLOR IN OWNERSHIP POSITIONS BECAUSE I THINK IT’S GOOD FOR THE ENTIRE INDUSTRY, AND FOR THE WELL-BEING OF MOVING THIS FORWARD.”

HAVE YOU NOTICED THIS YEAR’S CROP REACTING TO SMOKE IN THE AIR OR OTHER STRESSORS TRIGGERED BY THE WILDFIRES? Yes.

The quality of the light – the amber and orange and red and pink hues — I have a feeling that we’re going to see some really extreme terpene profiles and some minor cannabinoid expressions that we haven’t seen before. That’s my guess. That’s terroir, man. That’s appellation of origin. The phrase that keeps coming to my mind is ‘smoke the truth.’ AS WE REACH THE END OF A MOST UNUSUAL HARVEST SEASON, WHAT’S YOUR MINDSET LOOKING AHEAD TO NEXT YEAR AND BEYOND?

I think that we are in a time right now where it’s important for everybody to participate, to contribute what they can and to take personal responsibility. This is not a time of convenience. It’s not a time of taking the easy way out. It’s a time for digging in, getting dirty, and doing the hard work of confronting ourselves and each other about the ways in which we can improve – both as individuals and as humanity. The present systems and the way we’re approaching life is not working. How many bells can go off in the same year? Wake up, y’all. This is not working.