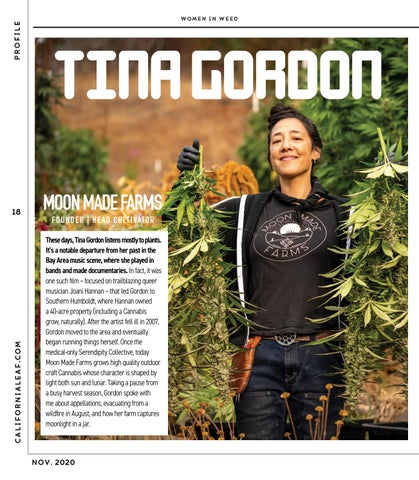 These days, Tina Gordon listens mostly to plants. It’s a notable departure from her past in the Bay Area music scene, where she played in bands and made documentaries. In fact, it was one such film – focused on trailblazing queer musician Joani Hannan – that led Gordon to Southern Humboldt, where Hannan owned a 40-acre property (including a Cannabis grow, naturally). After the artist fell ill in 2007, Gordon moved to the area and eventually began running things herself. Once the medical-only Serendipity Collective, today Moon Made Farms grows high quality outdoor craft Cannabis whose character is shaped by light both sun and lunar. Taking a pause from a busy harvest season, Gordon spoke with me about appellations, evacuating from a wildfire in August, and how her farm captures moonlight in a jar.