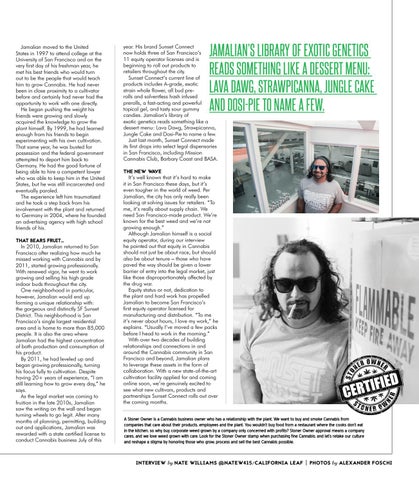 Jamalian moved to the United States in 1997 to attend college at the University of San Francisco and on the very first day of his freshman year, he met his best friends who would turn out to be the people that would teach him to grow Cannabis. He had never been in close proximity to a cultivator before and certainly had never had the opportunity to work with one directly. He began pushing the weight his friends were growing and slowly acquired the knowledge to grow the plant himself. By 1999, he had learned enough from his friends to begin experimenting with his own cultivation. That same year, he was busted for possession and the federal government attempted to deport him back to Germany. He had the good fortune of being able to hire a competent lawyer who was able to keep him in the United States, but he was still incarcerated and eventually paroled. The experience left him traumatized and he took a step back from his involvement with the plant and returned to Germany in 2004, where he founded an advertising agency with high school friends of his. THAT BEARS FRUIT…

In 2010, Jamalian returned to San Francisco after realizing how much he missed working with Cannabis and by 2011, started growing professionally. With renewed vigor, he went to work growing and selling his high grade indoor buds throughout the city. One neighborhood in particular, however, Jamalian would end up forming a unique relationship with: the gorgeous and distinctly SF Sunset District. This neighborhood is San Francisco’s single largest residential area and is home to more than 85,000 people. It is also the area where Jamalian had the highest concentration of both production and consumption of his product. By 2011, he had leveled up and began growing professionally, turning his focus fully to cultivation. Despite having 20+ years of experience, “I am still learning how to grow every day,” he says. As the legal market was coming to fruition in the late 2010s, Jamalian saw the writing on the wall and began turning wheels to go legit. After many months of planning, permitting, building out and applications, Jamalian was rewarded with a state certified license to conduct Cannabis business July of this

JAMALIAN’S LIBRARY OF EXOTIC GENETICS READS SOMETHING LIKE A DESSERT MENU: LAVA DAWG, STRAWPICANNA, JUNGLE CAKE AND DOSI-PIE TO NAME A FEW.

It’s well known that it’s hard to make it in San Francisco these days, but it’s even tougher in the world of weed. Per Jamalian, the city has only really been looking at solving issues for retailers. “To me, it’s really about supply chain. We need San Francisco-made product. We’re known for the best weed and we’re not growing enough.” Although Jamalian himself is a social equity operator, during our interview he pointed out that equity in Cannabis should not just be about race, but should also be about tenure – those who have paved the way should be given a lower barrier of entry into the legal market, just like those disproportionately affected by the drug war. Equity status or not, dedication to the plant and hard work has propelled Jamalian to become San Francisco’s first equity operator licensed for manufacturing and distribution. “To me it’s never about hours, I love my work,” he explains. “Usually I’ve moved a few packs before I head to work in the morning.” With over two decades of building relationships and connections in and around the Cannabis community in San Francisco and beyond, Jamalian plans to leverage these assets in the form of collaboration. With a new state-of-the-art cultivation facility applied for and coming online soon, we’re genuinely excited to see what new cultivars, products and partnerships Sunset Connect rolls out over the coming months. A Stoner Owner is a Cannabis business owner who has a relationship with the plant. We want to buy and smoke Cannabis from companies that care about their products, employees and the plant. You wouldn’t buy food from a restaurant where the cooks don’t eat in the kitchen, so why buy corporate weed grown by a company only concerned with profits? Stoner Owner approval means a company cares, and we love weed grown with care. Look for the Stoner Owner stamp when purchasing fine Cannabis, and let’s retake our culture and reshape a stigma by honoring those who grow, process and sell the best Cannabis possible.