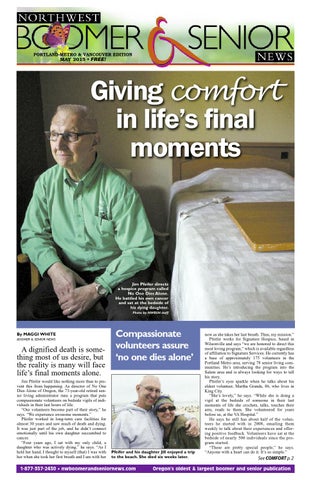 Jim Pfeifer directs a hospice program called No One Dies Alone. He battled his own cancer and sat at the bedside of his dying daughter. Photo by NWBSN staff

A dignified death is something most of us desire, but the reality is many will face life’s final moments alone. BOOMER & SENIOR NEWS

Jim Pfeifer would like nothing more than to prevent this from happening. As director of No One Dies Alone of Oregon, the 73-year-old retired senior living administrator runs a program that puts compassionate volunteers on bedside vigils of individuals in their last hours of life. “Our volunteers become part of their story,” he says. “We experience awesome moments.” Pfeifer worked in long-term care facilities for almost 30 years and saw much of death and dying. It was just part of the job, and he didn’t connect emotionally until his own daughter succumbed to cancer. “Four years ago, I sat with my only child, a daughter who was actively dying,” he says. “As I held her hand, I thought to myself (that) I was with her when she took her first breath and I am with her

Pfeifer and his daughter Jill enjoyed a trip to the beach. She died six weeks later.

now as she takes her last breath. Thus, my mission.” Pfeifer works for Signature Hospice, based in Wilsonville and says “we are honored to direct this most loving program,” which is available regardless of affiliation to Signature Services. He currently has a base of approximately 175 volunteers in the Portland Metro area, serving 78 senior living communities. He’s introducing the program into the Salem area and is always looking for ways to tell his story. Pfeifer’s eyes sparkle when he talks about his eldest volunteer, Martha Granda, 86, who lives in King City. “She’s lovely,” he says. “While she is doing a vigil at the bedside of someone in their last moments of life she crochets, talks, touches their arm, reads to them. She volunteered for years before us, at the VA Hospital.” He says he still has about half of the volunteers he started with in 2008, emailing them weekly to talk about their experiences and offering positive feedback. Volunteers have sat at the bedside of nearly 500 individuals since the program started. “These are pretty special people,” he says. “Anyone with a heart can do it. It’s so simple.”