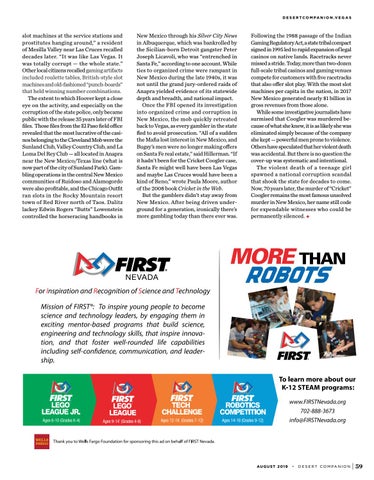 slot machines at the service stations and prostitutes hanging around,” a resident of Mesilla Valley near Las Cruces recalled decades later. “It was like Las Vegas. It was totally corrupt — the whole state.” Other local citizens recalled gaming artifacts included roulette tables, British-style slot machines and old-fashioned “punch-boards” that held winning number combinations. The extent to which Hoover kept a close eye on the activity, and especially on the corruption of the state police, only became public with the release 35 years later of FBI files. Those files from the El Paso field office revealed that the most lucrative of the casinos belonging to the Cleveland Mob were the Sunland Club, Valley Country Club, and La Loma Del Rey Club — all located in Anapra near the New Mexico/Texas line (what is now part of the city of Sunland Park). Gambling operations in the central New Mexico communities of Ruidoso and Alamogordo were also profitable, and the Chicago Outfit ran slots in the Rocky Mountain resort town of Red River north of Taos. Dalitz lackey Edwin Rogers “Butts” Lowenstein controlled the horseracing handbooks in

New Mexico through his Silver City News in Albuquerque, which was bankrolled by the Sicilian-born Detroit gangster Peter Joseph Licavoli, who was “entrenched in Santa Fe,” according to one account. While ties to organized crime were rampant in New Mexico during the late 1940s, it was not until the grand jury-ordered raids of Anapra yielded evidence of its statewide depth and breadth, and national impact. Once the FBI opened its investigation into organized crime and corruption in New Mexico, the mob quickly retreated back to Vegas, as every gambler in the state fled to avoid prosecution. “All of a sudden the Mafia lost interest in New Mexico, and Bugsy’s men were no longer making offers on Santa Fe real estate,” said Hillerman. “If it hadn’t been for the Cricket Coogler case, Santa Fe might well have been Las Vegas and maybe Las Cruces would have been a kind of Reno,” wrote Paula Moore, author of the 2008 book Cricket in the Web. But the gamblers didn’t stay away from New Mexico. After being driven underground for a generation, ironically there’s more gambling today than there ever was.

Following the 1988 passage of the Indian Gaming Regulatory Act, a state tribal compact signed in 1995 led to rapid expansion of legal casinos on native lands. Racetracks never missed a stride. Today, more than two-dozen full-scale tribal casinos and gaming venues compete for customers with five racetracks that also offer slot play. With the most slot machines per capita in the nation, in 2017 New Mexico generated nearly $1 billion in gross revenues from those alone. While some investigative journalists have surmised that Coogler was murdered because of what she knew, it is as likely she was eliminated simply because of the company she kept — powerful men prone to violence. Others have speculated that her violent death was accidental. But there is no question the cover-up was systematic and intentional. The violent death of a teenage girl spawned a national corruption scandal that shook the state for decades to come. Now, 70 years later, the murder of “Cricket” Coogler remains the most famous unsolved murder in New Mexico, her name still code for expendable witnesses who could be permanently silenced. ✦