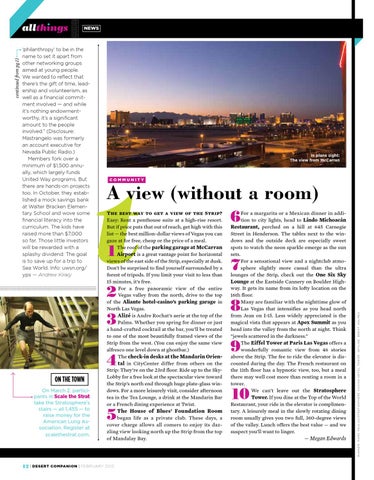 ‘philanthropy’ to be in the name to set it apart from other networking groups aimed at young people. We wanted to reflect that there’s the gift of time, leadership and volunteerism, as well as a financial commitment involved — and while it’s nothing endowmentworthy, it’s a significant amount to the people involved.” (Disclosure: Mastrangelo was formerly an account executive for Nevada Public Radio.) Members fork over a minimum of $1,500 annually, which largely funds United Way programs. But there are hands-on projects too. In October, they established a mock savings bank at Walter Bracken Elementary School and wove some financial literacy into the curriculum. The kids have raised more than $7,000 so far. Those little investors will be rewarded with a splashy dividend: The goal is to save up for a trip to Sea World. Info: uwsn.org/ yps — Andrew Kiraly

A view (without a room)

The best way to get a view of the Strip? Easy: Rent a penthouse suite at a high-rise resort. But if price puts that out of reach, get high with this list — the best million-dollar views of Vegas you can gaze at for free, cheap or the price of a meal. The roof of the parking garage at McCarran Airport is a great vantage point for horizontal views of the east side of the Strip, especially at dusk. Don’t be surprised to find yourself surrounded by a forest of tripods. If you limit your visit to less than 15 minutes, it’s free. For a free panoramic view of the entire Vegas valley from the north, drive to the top of the Aliante hotel-casino’s parking garage in North Las Vegas. Alizé is Andre Rochat’s aerie at the top of the Palms. Whether you spring for dinner or just a hand-crafted cocktail at the bar, you’ll be treated to one of the most beautifully framed views of the Strip from the west. (You can enjoy the same view alfresco one level down at ghostbar.) The check-in desks at the Mandarin Oriental in CityCenter differ from others on the Strip: They’re on the 23rd floor. Ride up to the SkyLobby for a free look at the spectacular view toward the Strip’s north end through huge plate-glass windows. For a more leisurely visit, consider afternoon tea in the Tea Lounge, a drink at the Mandarin Bar or a French dining experience at Twist. The House of Blues’ Foundation Room began life as a private club. These days, a cover charge allows all comers to enjoy its dazzling view looking north up the Strip from the top of Mandalay Bay.

On March 2, participants in Scale the Strat take the Stratosphere’s stairs — all 1,455 — to raise money for the American Lung Association. Register at scalethestrat.com.

Pundit in flight: Jon Ralston is taking his brand solo.

In plane sight: The view from McCarran

For a margarita or a Mexican dinner in addition to city lights, head to Lindo Michoacán Restaurant, perched on a hill at 645 Carnegie Street in Henderson. The tables next to the windows and the outside deck are especially sweet spots to watch the neon sparkle emerge as the sun sets. For a sensational view and a nightclub atmosphere slightly more casual than the ultra lounges of the Strip, check out the One Six Sky Lounge at the Eastside Cannery on Boulder Highway. It gets its name from its lofty location on the 16th floor. Many are familiar with the nighttime glow of Las Vegas that intensifies as you head north from Jean on I-15. Less widely appreciated is the magical vista that appears at Apex Summit as you head into the valley from the north at night. Think “jewels scattered in the darkness.” The Eiffel Tower at Paris Las Vegas offers a wonderfully romantic view from 46 stories above the Strip. The fee to ride the elevator is discounted during the day. The French restaurant on the 11th floor has a hypnotic view, too, but a meal there may well cost more than renting a room in a tower. We can’t leave out the Stratosphere Tower. If you dine at the Top of the World Restaurant, your ride in the elevator is complimentary. A leisurely meal in the slowly rotating dining room usually gives you two full, 360-degree views of the valley. Lunch offers the best value — and we suspect you’ll want to linger. — Megan Edwards