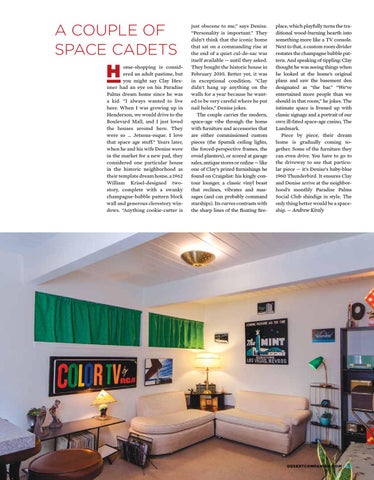 A couple of space cadets

ome-shopping is considered an adult pastime, but you might say Clay Heximer had an eye on his Paradise Palms dream home since he was a kid. “I always wanted to live here. When I was growing up in Henderson, we would drive to the Boulevard Mall, and I just loved the houses around here. They were so ... Jetsons-esque. I love that space age stuff.” Years later, when he and his wife Denise were in the market for a new pad, they considered one particular house in the historic neighborhood as their template dream home, a 1962 William Krisel-designed twostory, complete with a swanky champagne-bubble pattern block wall and generous clerestory windows. “Anything cookie-cutter is

just obscene to me,” says Denise. “Personality is important.” They didn’t think that the iconic home that sat on a commanding rise at the end of a quiet cul-de-sac was itself available — until they asked. They bought the historic house in February 2010. Better yet, it was in exceptional condition. “Clay didn’t hang up anything on the walls for a year because he wanted to be very careful where he put nail holes,” Denise jokes. The couple carries the modern, space-age vibe through the home with furniture and accessories that are either commissioned custom pieces (the Sputnik ceiling lights, the forced-perspective frames, the ovoid planters), or scored at garage sales, antique stores or online — like one of Clay’s prized furnishings he found on Craigslist: his kingly contour lounger, a classic vinyl beast that reclines, vibrates and massages (and can probably command starships). Its curves contrasts with the sharp lines of the floating fire-

place, which playfully turns the traditional wood-burning hearth into something more like a TV console. Next to that, a custom room divider restates the champagne bubble pattern. And speaking of tippling: Clay thought he was seeing things when he looked at the home’s original plans and saw the basement den designated as “the bar.” “We’ve entertained more people than we should in that room,” he jokes. The intimate space is livened up with classic signage and a portrait of our own ill-fated space-age casino, The Landmark. Piece by piece, their dream home is gradually coming together. Some of the furniture they can even drive. You have to go to the driveway to see that particular piece — it’s Denise’s baby-blue 1960 Thunderbird. It ensures Clay and Denise arrive at the neighborhood’s monthly Paradise Palms Social Club shindigs in style. The only thing better would be a spaceship. — Andrew Kiraly

Desert Companion celebrates the passions and aspirations of Southern Nevadans. We inform, entertain, engage people and define the spirit of the Las Vegas Valley.