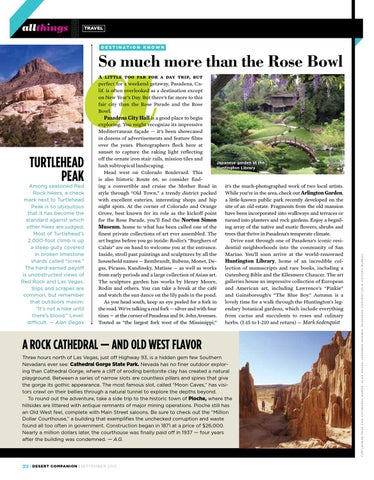 Among seasoned Red Rock hikers, a check mark next to Turtlehead Peak is so ubiquitous that it has become the standard against which other hikes are judged. Most of Turtlehead’s 2,000-foot climb is up a steep gully covered in broken limestone shards called “scree.” The hard-earned payoff is unobstructed views of Red Rock and Las Vegas. Slips and scrapes are common, but remember that outdoors maxim: “It’s not a hike until there’s blood.” Level: difficult. — Alan Gegax

A little too far for a day trip, but perfect for a weekend getaway, Pasadena, Calif. is often overlooked as a destination except on New Year’s Day. But there’s far more to this fair city than the Rose Parade and the Rose Bowl. Pasadena City Hall is a good place to begin exploring. You might recognize its impressive Mediterranean façade — it’s been showcased in dozens of advertisements and feature films over the years. Photographers flock here at sunset to capture the raking light reflecting off the ornate iron stair rails, mission tiles and Japanese garden at the lush subtropical landscaping. Huntington Library Head west on Colorado Boulevard. This is also historic Route 66, so consider findit’s the much-photographed work of two local artists. ing a convertible and cruise the Mother Road in While you’re in the area, check out Arlington Garden, style through “Old Town,” a trendy district packed a little-known public park recently developed on the with excellent eateries, interesting shops and hip site of an old estate. Fragments from the old mansion night spots. At the corner of Colorado and Orange have been incorporated into walkways and terraces or Grove, best known for its role as the kickoff point turned into planters and rock gardens. Enjoy a beguilfor the Rose Parade, you’ll find the Norton Simon ing array of the native and exotic flowers, shrubs and Museum, home to what has been called one of the trees that thrive in Pasadena’s temperate climate. finest private collections of art ever assembled. The Drive east through one of Pasadena’s iconic resiart begins before you go inside: Rodin’s “Burghers of dential neighborhoods into the community of San Calais” are on hand to welcome you at the entrance. Marino. You’ll soon arrive at the world-renowned Inside, stroll past paintings and sculptures by all the Huntington Library, home of an incredible colhousehold names — Rembrandt, Rubens, Monet, Delection of manuscripts and rare books, including a gas, Picasso, Kandinsky, Matisse — as well as works Gutenberg Bible and the Ellesmere Chaucer. The art from early periods and a large collection of Asian art. galleries house an impressive collection of European The sculpture garden has works by Henry Moore, and American art, including Lawrence’s “Pinkie” Rodin and others. You can take a break at the café and Gainsborough’s “The Blue Boy.” Autumn is a and watch the sun dance on the lily pads in the pond. lovely time for a walk through the Huntington’s legAs you head south, keep an eye peeled for a fork in endary botanical gardens, which include everything the road. We’re talking a real fork — silver and with four from cactus and succulents to roses and culinary tines — at the corner of Pasadena and St. John Avenues. herbs. (I-15 to I-210 and return) — Mark Sedenquist Touted as “the largest fork west of the Mississippi,”

A rock cathedral — and Old West flavor Three hours north of Las Vegas, just off Highway 93, is a hidden gem few Southern Nevadans ever see: Cathedral Gorge State Park. Nevada has no finer outdoor exploring than Cathedral Gorge, where a cliff of eroding bentonite clay has created a natural playground. Between a series of narrow slots are countless pillars and spires that give the gorge its gothic appearance. The most famous slot, called “Moon Caves,” has visitors crawl on their bellies through a natural tunnel to explore the depths beyond. To round out the adventure, take a side trip to the historic town of Pioche, where the hillsides are littered with antique remnants of major mining operations. Pioche still has an Old West feel, complete with Main Street saloons. Be sure to check out the “Million Dollar Courthouse,” a building that exemplifies the unchecked corruption and waste found all too often in government. Construction began in 1871 at a price of $26,000. Nearly a million dollars later, the courthouse was finally paid off in 1937 — four years after the building was condemned. — A.G.

So much more than the Rose Bowl