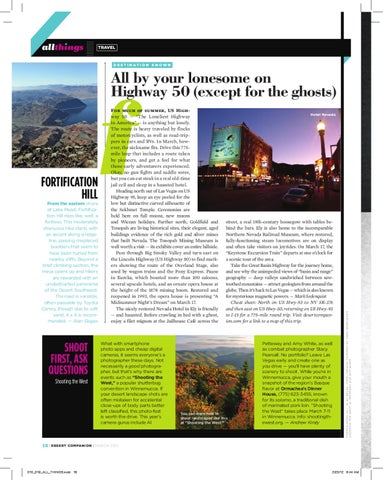 All by your lonesome on Highway 50 (except for the ghosts)

From the eastern shore of Lake Mead, Fortification Hill rises like, well, a fortress. This moderately strenuous hike starts with an ascent along a ridgeline, passing misplaced boulders that seem to have been hurled from nearby cliffs. Beyond a brief climbing section, the mesa opens up and hikers are rewarded with an unobstructed panorama of the Desert Southwest. The road is variable, often passable by Toyota Camry, though due to soft sand, 4 x 4 is recommended. — Alan Gegax

For much of summer, US Highway 50 — “The Loneliest Highway in America” — is anything but lonely. The route is heavy traveled by flocks of motorcyclists, as well as road-trippers in cars and RVs. In March, however, the nickname fits. Drive this 775mile loop that includes a route taken by pioneers, and get a feel for what those early adventurers experienced. Okay, no gun fights and saddle sores, but you can eat steak in a real old-time jail cell and sleep in a haunted hotel. Heading north out of Las Vegas on US Highway 95, keep an eye peeled for the low but distinctive curved silhouette of the Sekhmet Temple. Ceremonies are held here on full moons, new moons and Wiccan holidays. Further north, Goldfield and Tonopah are living historical sites, their elegant, aged buildings evidence of the rich gold and silver mines that built Nevada. The Tonopah Mining Museum is well worth a visit — its exhibits cover an entire hillside. Pass through Big Smoky Valley and turn east on the Lincoln Highway (US Highway 50) to find markers showing the route of the Overland Stage, also used by wagon trains and the Pony Express. Pause in Eureka, which boasted more than 100 saloons, several upscale hotels, and an ornate opera house at the height of the 1878 mining boom. Restored and reopened in 1993, the opera house is presenting “A Midsummer Night’s Dream” on March 17. The nicely restored Nevada Hotel in Ely is friendly — and haunted. Before crawling in bed with a ghost, enjoy a filet mignon at the Jailhouse Café across the

What with smartphone photo apps and cheap digital cameras, it seems everyone’s a photographer these days. Not necessarily a good photographer, but that’s why there are events such as “Shooting the West,” a popular shutterbug convention in Winnemucca. If your desert landscape shots are often mistaken for accidental close-ups of body parts better left classified, this photo-fest is worth the drive. This year’s camera gurus include Al

street, a real 19th-century hoosegow with tables behind the bars. Ely is also home to the incomparable by: __________________________ Northern Nevada Railroad Museum, where restored, fully-functioning steam locomotives are on display date: ________________________ and often take visitors on joyrides. On March 17, the “Keystone Excursion Train” departs at one o’clock for a scenic tour of the area. Take the Great Basin Highway for the journey home, and see why the unimpeded views of “basin and range” geography — deep valleys sandwiched between sawtoothed mountains — attract geologists from around the globe. Then it’s back to Las Vegas — which is also known for mysterious magnetic powers. — Mark Sedenquist Cheat sheet: North on US Hwy-93 to NV SR-376 and then east on US Hwy-50, returning on US Hwy-93 to I-15 for a 775-mile round trip. Visit desertcompanion.com for a link to a map of this trip.

You can learn how to shoot landscapes like this at “Shooting the West.”

Petteway and Amy White, as well as combat photographer Stacy Pearsall. No portfolio? Leave Las Vegas early and create one as you drive — you’ll have plenty of scenery to shoot. While you’re in Winnemucca, give your mouth a snapshot of the region’s Basque flavor at Ormachea’s Dinner House, (775) 623-3455, known for its solomo, a traditional dish of marinated pork loin. “Shooting the West” takes place March 7-11 in Winnemucca. Info: shootingthewest.org. — Andrew Kiraly