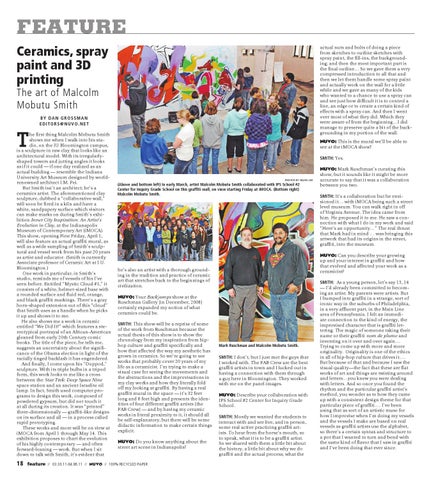 actual nuts and bolts of doing a piece from sketches to outline sketches with spray paint, the fill-ins, the backgrounding; and then the most important part is the final outline… So we gave them a very compressed introduction to all that and then we let them handle some spray paint and actually work on the wall for a little while and we gave as many of the kids who wanted to a chance to use a spray can and see just how difficult it is to control a line, an edge or to create a certain kind of effects with a spray can. And then I went over most of what they did. Which they were aware of from the beginning…I did manage to preserve quite a bit of the backgrounding in my portion of the wall.

The art of Malcolm Mobutu Smith

he first thing Malcolm Mobutu Smith shows me when I walk into his studio, on the IU Bloomington campus, is a sculpture in raw clay that looks like an architectural model. With its irregularlyshaped towers and jutting angles it looks as if it could — if one day realized as an actual building — resemble the Indiana University Art Museum designed by worldrenowned architect I.M. Pei. But Smith isn’t an architect; he’s a ceramics artist. The aforementioned clay sculpture, dubbed a “collaborative wall,” will soon be fired in a kiln and have a white, sandpapery surface which visitors can make marks on during Smith’s exhibition Inner City Inspiration: An Artist’s Evolution in Clay, at the Indianapolis Museum of Contemporary Art (iMOCA). This show, opening First Friday, April 1, will also feature an actual graffiti mural, as well as a wide sampling of Smith’s sculptural and vessel work from his past 20 years as artist and educator. (Smith is currently Associate professor of Ceramic Art at I.U. Bloomington.) One work in particular, in Smith’s studio, reminds me of vessels of his I’ve seen before. Entitled “Mystic Cloud #1,” it consists of a white, helmet-sized base with a rounded surface and fluid red, orange, and black graffiti markings. There’s a gray horn-shaped extension out of this “cloud” that Smith uses as a handle when he picks it up and shows it to me. He also shows me a work in ceramic entitled “We Did It?” which features a stereotypical portrayal of an African-American gleaned from early 20th Century comic books. The title of the piece, he tells me, suggests an uncertainty about the significance of the Obama election in light of the racially tinged backlash it has engendered. And finally, I come upon his “Doppod,” sculpture. With its triple bulbs in a tripod form, this work looks to me like a cross between the Star Trek: Deep Space Nine space station and an ancient Israelite oil lamp. In fact, Smith used computer programs to design this work, composed of powdered gypsum, but did not touch it at all during its creation. It was “printed” three-dimensionally — graffiti-like designs on its surface and all — in a process called rapid prototyping. These works and more will be on view at iMOCA from April 1 through May 14. This exhibition proposes to chart the evolution of his highly contemporary — and often forward-leaning — work. But when I sit down to talk with Smith, it’s evident that

NUVO: This is the mural we’ll be able to see at the iMOCA show? SMITH: Yes.

NUVO: Your Backjumps show at the Ruschman Gallery [in December, 2008] certainly expanded my notion of what ceramics could be.

NUVO: Do you know anything about the street art scene in Indianapolis?

SMITH: It’s a collaboration but he envisioned it… with iMOCA being such a street level museum. You can walk right in off of Virginia Avenue. The idea came from him. He proposed it to me. He saw a connection with what I do in my work and said “Here’s an opportunity…” The real thrust that Mark had in mind … was bringing this artwork that had its origins in the street, graffiti, into the museum. NUVO: Can you describe your growing up and your interest in graffiti and how that evolved and affected your work as a ceramicist?

he’s also an artist with a thorough grounding in the tradition and practice of ceramic art that stretches back to the beginnings of civilization.

SMITH: This show will be a reprise of some of the work from Ruschman because the actual thesis of this show is to show the chronology from my inspiration from hiphop culture and graffiti specifically and how that affected the way my aesthetic has grown in ceramics. So we’re going to see works that probably cover 20 years of my life as a ceramicist. I’m trying to make a visual case for seeing the movements and the abstractions and the improvisations in my clay works and how they literally fold off my looking at graffiti. By having a real graffiti mural in the space — it’s 32 feet long and 8 feet high and presents the identities of four different graffiti artists [the FAB Crew] — and by having my ceramic works in literal proximity to it, it should all be self-explanatory, but there will be some didactic information to make certain things explicit.

NUVO: Mark Ruschman’s curating this show, but it sounds like it might be more accurate to say that it was a collaboration between you two.

SMITH: I don’t, but I just met the guys that I worked with. The FAB Crew are the best graffiti artists in town and I lucked out in having a connection with them through a guy here in Bloomington. They worked with me on the panel images. NUVO: Describe your collaboration with IPS School #2 Center for Inquiry Grade School. SMITH: Mostly we wanted the students to interact with and see live, and in person, some real active practicing graffiti artists. To hear from the horse’s mouth, so to speak, what it is to be a graffiti artist. So we shared with them a little bit about the history, a little bit about why we do graffiti and the actual process; what the

SMITH: As a young person, let’s say 13, 14 — I’d already been committed to becoming an artist. My parents were artists. But I bumped into graffiti in a strange, sort of ironic way in the suburbs of Philadelphia, in a very affluent part, in the Main Line area of Pennsylvania. I felt an immediate connection to the kind of energy, the improvised character that is graffiti lettering. The magic of someone taking their name or their graffiti nom de plume and inventing on it over and over again.... Trying to come up with more and more originality. Originality is one of the ethics in all of hip-hop culture that drives it…. But because of that and because I saw the visual quality—the fact that these are flat works of art and things are twisting around and letters…you knew you were dealing with letters. And so once you found the rhythm and the particular graffiti artist’s method, you wonder as to how they came up with a consistent design theme for that particular piece of graffiti…. I’ve been using that as sort of an artistic muse for how I improvise when I’m doing my vessels and the vessels I make are based on real vessels as graffiti artists use the alphabet, so there’s a certain syntax and structure to a pot that I wanted to turn and bend with the same kind of flavor that I saw in graffiti and I’ve been doing that ever since. 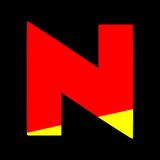