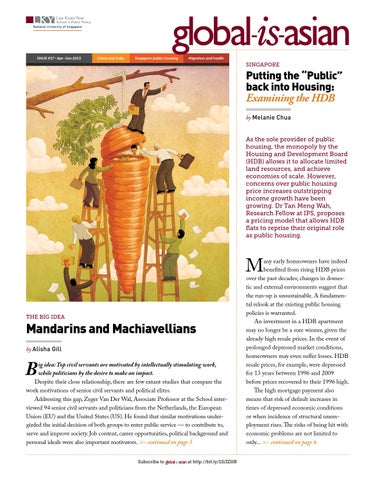 Putting the “Public” back into Housing: Examining the HDB by Melanie Chua As the sole provider of public housing, the monopoly by the Housing and Development Board (HDB) allows it to allocate limited land resources, and achieve economies of scale. However, concerns over public housing price increases outstripping income growth have been growing. Dr Tan Meng Wah, Research Fellow at IPS, proposes a pricing model that allows HDB flats to reprise their original role as public housing.

Mandarins and Machiavellians by Alisha Gill

ig idea: Top civil servants are motivated by intellectually stimulating work, while politicians by the desire to make an impact. Despite their close relationship, there are few extant studies that compare the work motivations of senior civil servants and political elites. Addressing this gap, Zeger Van Der Wal, Associate Professor at the School interviewed 94 senior civil servants and politicians from the Netherlands, the European Union (EU) and the United States (US). He found that similar motivations undergirded the initial decision of both groups to enter public service — to contribute to, serve and improve society. Job content, career opportunities, political background and personal ideals were also important motivators.  p continued on page 3 Subscribe to

any early homeowners have indeed benefited from rising HDB prices over the past decades; changes in domestic and external environments suggest that the run-up is unsustainable. A fundamental relook at the existing public housing policies is warranted. An investment in a HDB apartment may no longer be a sure winner, given the already high resale prices. In the event of prolonged depressed market conditions, homeowners may even suffer losses. HDB resale prices, for example, were depressed for 13 years between 1996 and 2009 before prices recovered to their 1996 high. The high mortgage payment also means that risk of default increases in times of depressed economic conditions or when incidence of structural unemployment rises. The risks of being hit with economic problems are not limited to only...  p continued on page 6 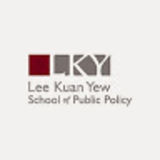