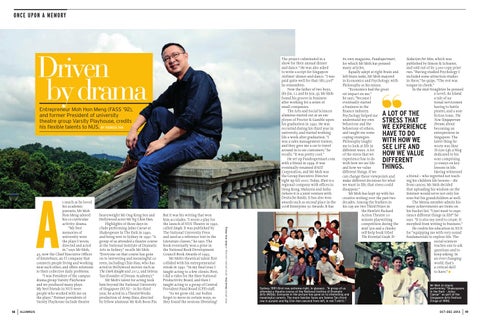 Once Upon a Memory

The project culminated in a show for their annual dinner and dance.” He was also asked to write a script for Singapore Airlines’ dinner-and-dance. “I was paid quite well for that: S$1,500!” he remembers. Now the father of two boys, (Ee Jin, 12 and Ee Jon, 9), Mr Moh found his groove in business after working for a series of small companies. The Arts and Social Sciences alumnus started out as an employee of Procter &amp; Gamble upon his graduation in 1992. He was recruited during his third year in university, and started working life a week after graduation. “I was a sales management trainee, and they gave me a car to travel around in to see customers,” he recalls. “It was pretty cool.” He set up Fundsupermart.com with a friend in 1999. It was eventually renamed iFAST Corporation, and Mr Moh was the Group Executive Director right up till 2010. Today, iFast is a regional company with offices in Hong Kong, Malaysia and India (where it is a joint venture with Deutsche Bank). It has also won awards such as second place in the 2008 Enterprise 50 Awards. It has

s much as he loved his academic pursuits, Mr Moh Hon Meng adored his co-curricular activity: drama. “My best memories of university were the plays I wrote, directed and acted in,” says Mr Moh, 45, now the Chief Executive Officer of Estatebuzz, an IT company that connects people living and working near each other, and offers solutions to their collective daily problems. “I was President of the campus drama group Varsity Playhouse and we produced many plays. My best friends in NUS were people who worked with me on the plays.” Former presidents of Varsity Playhouse include theatre

heavyweight Mr Ong Keng Sen and Hollywood actor Mr Ng Chin Han. Highlights of those days include performing Julius Caesar at Shakespeare In The Park in 1990, and being sent to Sydney in 1991. “A group of us attended a theatre course at the National Institute of Dramatic Arts in Sydney,” recalls Mr Moh. “Everyone on that course has gone on to interesting and meaningful careers, including Chin Han, who has acted in Hollywood movies such as The Dark Knight and 2012, and Selena Tan (founder of Dream Academy).” Mr Moh’s talent for acting took him beyond the National University of Singapore (NUS) – in his third year, he acted in a TheatreWorks production of Army Daze, directed by fellow alumnus Mr Koh Boon Pin.

But it was his writing that won him accolades. “I wrote a play for the launch of NUS Theatre in 1991, called Single. It was published by The National University Press and used as a reference text in the Literature classes,” he says. The book eventually won a prize in the National Book Development Council Book Awards of 1993. Mr Moh’s theatrical talent first collided with his entrepreneurial streak in 1991. “In my final year, I taught acting to a few clients. First, I did a video for the then-National Productivity Board, and then I taught acting to a group of Central Provident Fund Board (CPF) staff. “As we grow old, our bodies forget to move in certain ways, so they found the sessions liberating!

its own magazine, Fundsupermart, for which Mr Moh has penned many articles. Equally adept at right-brain and left-brain tasks, Mr Moh majored in Economics and Psychology, with Philosophy as his minor. “Economics had the greatest impact on me,” he says, “because I eventually started a business in the finance industry. Psychology helped me understand my own behaviour and the behaviour of others, and taught me some coping strategies. Philosophy taught me to look at life in different ways. A lot of the stress that we experience has to do with how we see life and how we value different things. If we can change those viewpoints and make different decisions for what we want in life, that stress could disappear.” Mr Moh has kept up with his creative writing over the past two decades. Among the feathers in his cap are two Third Prizes in the Hewlett Packard Action Theatre 10minute playwriting competition during the mid-‘90s and a cheeky self-help book titled The Essential Guide To

Sydney, 1991 (first row, extreme right, in glasses) . “A group of us attended a theatre course at the National Institue of Dramatic Arts (NIDA). Everyone in the picture has gone on to interesting and meaningful careers. The more familiar faces are Selena Tan (front row in purple) and Ng Chin Han (second from left, in red T-shirt).“

Seduction For Men, which was published by Simon &amp; Schuster, and sold out of its 3,000-copy print run. “Having studied Psychology I included some attraction studies in there,” he quips. “The rest was tongue-in-cheek.” In the mid-Noughties he penned a novel, Ko Island, a tale of national servicemen having to battle pirates, and a nonfiction tome, The New Singaporean Dream, about becoming an entrepreneur in Singapore. The latest thing he wrote was How To Live Life, a blog dedicated to his sons comprising 30 essays on key lessons in life. Having witnessed a friend – who regretted not teaching his children life lessons – die from cancer, Mr Moh decided that uploading his wisdom on the Internet would serve not only his sons but his grandchildren as well. The Mensa member admits his many achievements are items on his bucket list. “I just want to experience different things in life!” he says. “It is also my need to create. It morphed from writing to business.” He credits his education in NUS for “equipping me with very sound fundamentals to explore life. The social sciences teaches one to ask questions and to keep asking. In an ever-changing world, that’s a critical skill to have.”

A lot of the stress that we experience have to do with how we see life and how we value different things.

Mr Moh (in black) performing “Shakespeare in the Park - Julius Caesar” as part of the Singapore Arts Festival Fringe of 1990.