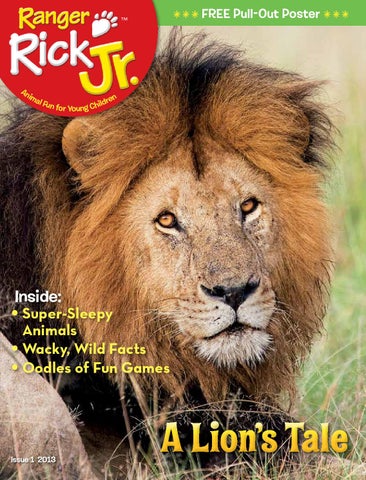 Hi, there! My friends and I made this magazine just for you. This month you’ll meet a family of lions and learn how animals sleep. Thanks for reading! l, Your pa

There’s a lot more to a lion than just a shaggy mane. Turn to page 6 to learn all about these amazing animals. photo by Suzi Eszterhas

This seahorse isn’t picking out a Christmas tree. It’s looking at jellyfish that look like tiny fir trees.

t A shark does no chew its food.

A chameleon’s tongue c an be longer than its body.

Every tiger’s stripes are different.

Listen up, little one, and I’ll tell you about your family. Photos By Suzi Eszterhas

The “mane” thing you need to know about lions is we’re NOT like other cats.

A female lion is called a lioness.

Lions live in groups called prides. Every pride has females and their babies, as well as a couple of male lions.

A baby lion is called a cub.

Lions sleep most of the day. We're tired after hunting all night. You and the other cubs won't join the hunt until you are older.

Lions hunt for animals both big and small to eat. Cubs eat meat the lionesses bring home from the hunt.

I've got a brand new iPad® app. Ąnd it's all about lions!

Look for Ranger Rick Jr. Appventures™ in the App StoreSM.

How many lion cubs can you find?

Use the clues to figure out which lion is named Lars. 1. Luke and Leslie are hungry. 2. Lori, Lenny, and Lars are very tired. 3. Lani, Lionel, Lou, and Larry play all day. 4. Lars is older than Lenny.

End Start Help the little lion cub find the way back to his pride.

Ą Winter Friend It was a cold winter day.

were walking in the Chester

as he looked inside an empty

both sleep all turtle

“Maybe we should make a new friend,” said Bonnie

. Soon they had a snowballs

“Here’s a winter friend who won’t fly away or go to sleep,” said Bonnie

to keep me company.” snowman

Why Do Zebras Have Stripes?

Nobody knows for sure why zebras have stripes, but scientists have some ideas. 1. No two zebras have the same pattern of stripes. So zebras use the stripes to figure out whoâ&#x20AC;&#x2122;s who.

2. When a herd of zebras takes off running, the group becomes a blur of black and white. That makes it hard for a lion to pick out a single zebra to catch.

3. Having stripes helps zebras hide. The lions that hunt them are colorblind. So, to a lion, a zebraâ&#x20AC;&#x2122;s stripes look like the wavy lines of the tall grasses even though they are different colors.

4. Scientists recently discovered another good thing about having stripes. Horseflies donâ&#x20AC;&#x2122;t like them. So these biting pests bother other animals instead. Look again! Find 5 things wrong with this picture. 17

Nosey Monkey Whoâ&#x20AC;&#x2122;s this munching on leaves? With a nose like that it has to be a proboscis (pro-BAH-sis) monkey. No other kind of monkey has such a pointy snout.

Ricky and Pals in

Ricky Raccoon, Bizzie Beaver, Mitzi Mink, Flora Skunk, and Flora’s little brother, Sammy, were taking a winter hike. They were going to see a waterfall on the other side of Deep Green Wood. Ricky had a map to show the way. But after they had walked a long time, Ricky stopped.

“Hmm,” he said. “The map shows that we leave the path here.” “But how will we find our way back?” asked Flora. She, Ricky, and Bizzie all gathered around the map in a circle. “I have an idea!” said Sammy. But no one listened.

“We don’t want to get lost,” said Bizzie. “I have an idea!” said Sammy a little louder. Still no one paid attention. “We need a really good idea,” said Ricky. Frustrated, Sammy squeezed through their legs into the circle. “I have an idea!” he shouted. The others looked down at him in surprise. “Well, why didn’t you say so, Sammy?” asked Flora. Sammy sighed.

He dug into his bib pocket and pulled out some buttercups, a clover, and more pebbles. “Nope, not that one,” Sammy said. Then Sammy put his paw into his third pocket and pulled out a pawful of acorns. “Here they are!” he said happily. “A trail of acorns!” said Ricky. “That’s perfect. Let’s go!” He left the path and wandered into the woods with the others behind him. Every so often, Sammy would drop an acorn.

“What’s your idea?” asked Ricky. “We could leave a trail,” Sammy said, “then use it to find our way back.” “That’s a silly idea,” said Bizzie. “We don’t have anything to use to make a trail.” “We could use something from my pockets!” said Sammy excitedly. Sammy kept all kinds of things in the pockets of his overalls. He dug into one and pulled out a pawful: some pretty pebbles, a feather, part of an old eggshell, and some twigs. “Oops, wrong pocket,” he said, stuffing everything back in.

After a while, Ricky shouted excitedly, “The waterfall!” He began to run. When Ricky reached the waterfall, he stopped dead in his tracks. The others, running behind him, all bumped into each other. “The waterfall is frozen!” exclaimed Flora. “It’s beautiful,” said Ricky. “It looks like a giant Popsicle!” said Sammy. “It sure does,” said Bizzie with a grin. Then the friends sat on some rocks and had lunch. Before long they decided to head back.

“Let’s find my acorns,” said Sammy. But when they searched the ground, nobody saw any acorns. Suddenly Flora pointed. “Look over there!” she said. “That squirrel is eating an acorn. I bet it’s one of the acorns Sammy dropped earlier.” “Then let’s go that way,” said Ricky. “But how do we find the next acorn?” asked Bizzie. Ricky squinted, looking ahead. “Follow me!” he said. They followed Ricky to where a deer stood munching on something. “I’ll bet that’s one of Sammy’s acorns, too,” said Ricky.

The friends walked past the deer and kept looking for acorns, but they didn’t see any. “Oh, great,” said Bizzie. “Now we’re lost.” As he was complaining, something hit Bizzie on the head and bounced off. “Ouch!” he said. Sammy bent over and picked up an acorn. The friends all looked up to see a jay sitting on a branch above Bizzie.

“That jay must have dropped that acorn on Bizzie’s head,” said Ricky. “I bet we’re still going the right way.” Ahead, there was a chipmunk nibbling on an acorn. Then farther along, a rabbit was eating one. Farther still, they came upon a little mound of dirt. “Hmm, I wonder,” said Flora. She dug into the loose dirt and pulled out an acorn! “A squirrel must have found this and buried it,” she said. Suddenly Ricky pointed. “I see the path way over there!” he exclaimed. Once they were back on the path, Bizzie said, “I guess making a trail of acorns was a good idea after all.” “Yes,” agreed Ricky, “but instead of following the acorns back, we followed the trail of animals that found them!”

Which animal is different from the others? loon

Look! Two of the animals are in the water.

MĄke Thumbprint ZebrĄs Use a pad of black ink, a marker, and your thumb to make a herd of zebras.

How many different zebras can you make?

I think the zebra is saying, “I hate it when popcorn kernels get stuck in my teeth.”

SĄy WhĄt? What do YOU think this zebra is saying?

White Rhino has no pillow Where he can lay his head. So he snuggles up to sleep On the muddy ground instead.

No beds? Don't worry. These creatures can get comfy anywhere!

When Sea Otter needs a nap At the end of the day, She wraps herself in seaweed So she doesn't float away.

Polar Bear can flop down For some shut-eye on the ice. With warm fur for a blanket, The frozen ground feels nice. Matthias Breiter / Minden Pictures

Walrus piles up to doze On rocky ocean shores. He doesn't mind the pointy tusks Or noisy walrus snores.

Bat stays awake all night. So when morning comes around, She wraps up in her wings to sleep, Hanging upside down.

When Leopard is feeling lazy And wants to catch some ZZZs, She likes to lounge on branches That are high up in the trees.

Mountain Goat is cozy On a cliff that's very steep. He will not tumble off Even though he's fast asleep.

After lots of monkey play, Sleepy Little Macaque Cuddles up to slumber On his mother's furry back.

Cardinals do not fly south for the winter.

Unlike many songbirds, both male and female cardinals sing.

Cardinals live in the areas shown in red.

zard I found this li mping a c s when I wa y. il with my fam Emily

Ricky loves to get mail! Submit your drawings and photos online at nwf.org/rickysmail. Or mail them to:

Include your name, address, and age on the back of your drawing or photo.

Get toTiME Know an Evergreen GREEN

Which of these things did you find in your evergreen? needles

Have a roaring good time with this lion mask. What you need • heavyweight paper plate • sheet of orange tissue paper cut • • • • • • •

tongue out of craft foam. Glue the pieces onto the face.

5. Punch two holes on each side of

the mouth and nose. Thread the pipe cleaners through the holes to make whiskers.

with the glue mixture. Cover the glue-covered plate with the pieces of orange tissue paper. Paint a little more glue on top of the tissue paper. Set aside to dry.

Published by the National Wildlife Federation ®

6. Cut pieces of curling ribbon and

staple them along the edge of the plate to make the lion’s mane.

7. Tape the back of the mask to the ruler or paint stick.

What you do 1. Paint the bottom of the paper plate

Ranger Rick Jr. Copyrights © by the National Wildlife Federation. Ranger Rick Jr. is a registered trademark of National Wildlife Federation and is used under license by Nurture Craft Pte Ltd. Material in this issue may not be reproduced, in whole or in part, without permission from the publisher by contacting (email). In Singapore, contact Nurture Craft Pte Ltd, 39B Jalan Peminpin 03-02, Singapore 577184 or email info@nurturecraft.com.

Ąnswers to Back Cover Question: There are 14 zebras in this issue.

©2013 by the National Wildlife Federation. Printed in SINGAPORE.

Look Ä&#x201E;gain! How many zebras can you find in the magazine?

Have you ever seen penguins with yellow eyes and pretty pink feet? These rare birds live along the coast of New Zealand. 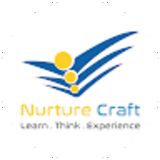