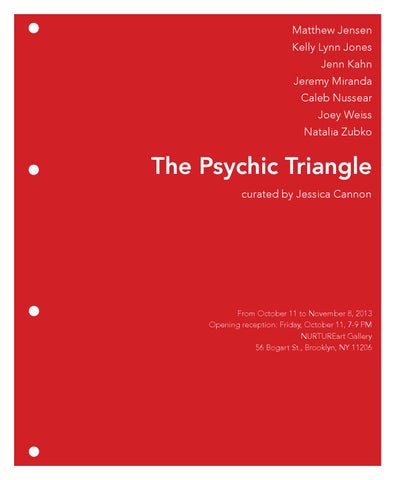 The Psychic Triangle by Jessica Cannon

The Psychic Triangle refers to the ambiguous territory between humans, the natural world, and the designed world. Through various forms of design such as object making, resource extraction, and designed systems of power, humans have assumed an outsize role in shaping the natural world while simultaneously awakening to a destructive aftermath. The artists in The Psychic Triangle are exploring the unfamiliar terrain where distinctions between nature and design dissolve into one another. From this uncertain place their diverse studio practices are mining a new consciousness; one that is defined by the inseparable coupling of power and anxiety. Matthew Jensen, Jeremy Miranda, and Joey Weiss use surrogate figures to articulate the alien qualities of natural and designed spaces. In The Return, Matthew Jensen depicts a plant growing atop a mossy beige carpet, within a Coast Guard barrack that has been uninhabited for over a decade. Its leaves stand at attention beneath a hole in the ceiling where water seeps through. Jeremy Mirandaâ&#x20AC;&#x2122;s painting, Dead of Winter, also imbues plants with figurative qualities. Set in an environment that is formally divided between an outside seascape and a minimal modern interior,

the plants bask under the orange glow of a heat lamp. The plants’ dependence on an artificial sun mirrors the ways that human survival is also wrapped up in designed objects. Alternating between night and day, interior and exterior, Joey Weiss’ video Shadow McDonalds offers a poetic creation myth for prosaic spaces. Set against various shadows, the block walls, trimmed shrubs, and mismatched chairs that populate Shadow McDonalds take on a character that transcends both nature and design. Jenn Kahn and Natalia Zubko reconstruct the natural world by using designed objects as sculptural material. Jenn Kahn’s work, Pack of Gray Standing Wolf, features a horizontal arrangement of identical porcelain wolf figurines atop a floorlevel plinth. Huddled together in a long line with chests pointed out, these symbols of the wild are in silent confrontation with the viewer. Through Kahn’s installation the wolves reclaim their iconic power while occupying a vulnerable position at the viewer’s feet. Natalia Zubko’s Cabinet of Little Systems displays small Haeckel-like specimens made of everyday materials. Circles collected from paper hole punches are carefully arranged like fish scales. Q-tips are intricately woven into a semi-circular dome reminiscent of coral. Zubko’s works quietly allude to the ways that discarded human objects are transforming the natural world. Both Caleb Nussear and Kelly Lynn Jones depict sublime skies interrupted by

technological objects. In Drones II, Caleb Nussear’s sometimes-blurry mountains channel the history of Romanticism into a virtual landscape surveyed by drones. While the aerial perspective reveals a particular orientation to the landscape, it is unclear if the image is translated from the site itself, or from a digital feed thousands of miles away. Through a process of mark making and erasing, Nussear’s graphite drawing articulates the inherently nebulous qualities of drones, which augment the physical presence of humans in the air while surveying and enacting violence against those on the ground. Kelly Lynn Jones’ 1986 is an arrangement of found images of the Challenger launch layered on top of each other in a column. The blue hues are reminiscent of the New York sky that was present on September 11, 2001. For those who witnessed these events the sky is no longer a thing unto itself but also a backdrop to human experiences. The Psychic Triangle is an evolving territory where the human scale is in constant flux. At a time when natural gas mining is causing small earthquakes and mechanical levees are promoted as a salve for rising tides, humans are caught in a paradox between dominance and vulnerability. For the artists in this exhibition, this particular consciousness represents both a strange condition and an opportunity. In approaching this terrain from various perspectives, they resist declarations and locate the self amid ideas and forms once thought to be separate.

NURTUREart Non-Profit, Inc is a 501(c)3 New York State licensed federally tax-exempt charitable organization founded in 1997 by George J. Robinson. NURTUREart receives support from the New York City Department of Cultural Affairs, including member item funding from City Council Members Sara Gonzales, Stephen Levin, and Diana Reyna, the New York City Department of Education, and the New York State Council on the Arts. NURTUREart is also supported by the Harold and Colene Brown Foundation, Edelman, the Golden Rule Foundation, the Greenwich Collection, Ltd., the Joan Mitchell Foundation, the Milton and Sally Avery Arts Foundation, the Walentas Family Foundation, and the Wolf Kahn and Emily Mason Foundation. We receive in-kind support from Brooklyn Brewery, Societe Perrier, Tekserve, and Volunteer Lawyers for the Arts. NURTUREart is grateful for significant past support from the Andy Warhol Foundation for the Visual Arts, The Liebovitz Foundation, and the Greenwall Foundation, and to the many generous individuals and businesses whose contributions have supported us throughout our history. Finally, we would like to acknowledge the artists who have contributed works of art to past benefitsâ&#x20AC;&#x201D;our continued success would be impossible without your generosity.

56 Bogart Street Brooklyn, NY 11206 L train to Morgan Avenue T 718 782 7755 F 718 569 2086 E gallery@nurtureart.org www.nurtureart.org Directions: By Subway: L train to the Morgan Avenue stop. Exit the station via Bogart Street. Look for the NURTUREart entrance on Bogart Street, close to the intersection with Harrison Place. By Car: Driving From Manhattan: Take the Williamsburg Bridge, stay in the outside lane, and take the Broadway / S. 5 St. exit. Turn left at light onto Havemeyer St. Turn right next light onto Borinquen Place, continue straight, street will change name to Grand Street. Turn right onto Bushwick Ave, left onto Johnson Ave, then right onto Bogart Street. Look for our entrance at the corner of Bogart Street and Harrison Place. 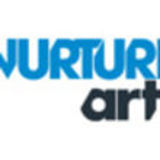 Catalog of the exhibition "The Psychic Triangle," curated by Jessica Cannon at NURTUREart and opening on October 11, 2013. Artists: Matt...

Catalog of the exhibition "The Psychic Triangle," curated by Jessica Cannon at NURTUREart and opening on October 11, 2013. Artists: Matt...