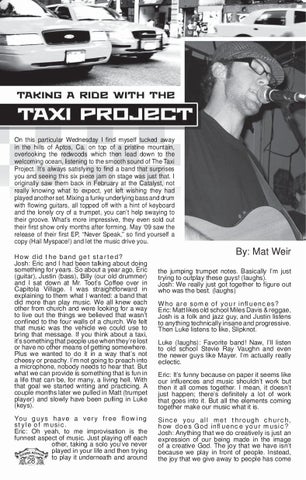 On this particular Wednesday I find myself tucked away in the hills of Aptos, Ca. on top of a pristine mountain, overlooking the redwoods which then lead down to the welcoming ocean, listening to the smooth sound of The Taxi Project. It’s always satisfying to find a band that surprises you and seeing this six piece jam on stage was just that. I originally saw them back in February at the Catalyst, not really knowing what to expect, yet left wishing they had played another set. Mixing a funky underlying bass and drum with flowing guitars, all topped off with a hint of keyboard and the lonely cry of a trumpet, you can’t help swaying to their groove. What’s more impressive, they even sold out their first show only months after forming. May ‘09 saw the release of their first EP, “Never Speak,” so find yourself a copy (Hail Myspace!) and let the music drive you. How did the band get started? Josh: Eric and I had been talking about doing something for years. So about a year ago, Eric (guitar), Justin (bass), Billy (our old drummer) and I sat down at Mr. Toot’s Coffee over in Capitola Village. I was straightforward in explaining to them what I wanted: a band that did more than play music. We all knew each other from church and were looking for a way to live out the things we believed that wasn’t confined to the four walls of a church. We felt that music was the vehicle we could use to bring that message. If you think about a taxi, it’s something that people use when they’re lost or have no other means of getting somewhere. Plus we wanted to do it in a way that’s not cheesy or preachy. I’m not going to preach into a microphone, nobody needs to hear that. But what we can provide is something that is fun in a life that can be, for many, a living hell. With that goal we started writing and practicing. A couple months later we pulled in Matt (trumpet player) and slowly have been pulling in Luke (keys). You guys have a very free flowing style of music. Eric: Oh yeah, to me improvisation is the funnest aspect of music. Just playing off each other, taking a solo you’ve never played in your life and then trying to play it underneath and around

By: Mat Weir the jumping trumpet notes. Basically I’m just trying to outplay these guys! (laughs). Josh: We really just got together to figure out who was the best. (laughs) Who are some of your influences? Eric: Matt likes old school Miles Davis &amp; reggae, Josh is a folk and jazz guy, and Justin listens to anything technically insane and progressive. Then Luke listens to like, Slipknot. Luke (laughs): Favorite band! Naw, I’ll listen to old school Stevie Ray Vaughn and even the newer guys like Mayer. I’m actually really eclectic. Eric: It’s funny because on paper it seems like our influences and music shouldn’t work but then it all comes together. I mean, it doesn’t just happen; there’s definitely a lot of work that goes into it. But all the elements coming together make our music what it is. Since you all met through church, how does God influence your music? Josh: Anything that we do creatively is just an expression of our being made in the image of a creative God. The joy that we have isn’t because we play in front of people. Instead, the joy that we give away to people has come

Featuring: Del The Funky Homosapien - The Harmony Festival and more... 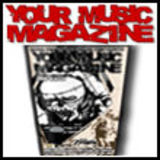