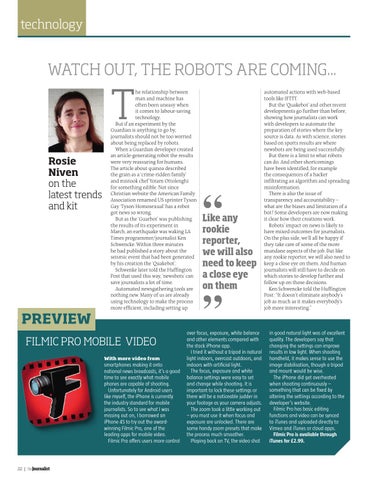 watch out, the robots are coming...

he relationship between man and machine has often been uneasy when it comes to labour-saving technology. But if an experiment by the Guardian is anything to go by, journalists should not be too worried about being replaced by robots. When a Guardian developer created an article-generating robot the results were very reassuring for humans. The article about quinoa described the grain as a ‘crime-ridden family’ and mistook chef Yotam Ottolenghi for something edible. Not since Christian website the American Family Association renamed US sprinter Tyson Gay ‘Tyson Homosexual’ has a robot got news so wrong. But as the ‘Guarbot’ was publishing the results of its experiment in March, an earthquake was waking LA Times programmer/journalist Ken Schwencke. Within three minutes he had published a story about the seismic event that had been generated by his creation the ‘Quakebot’. Schwenke later told the Huffington Post that used this way, ‘newsbots’ can save journalists a lot of time. Automated newsgathering tools are nothing new. Many of us are already using technology to make the process more efficient, including setting up

smartphones making it onto national news broadcasts, it’s a good time to see exactly what mobile phones are capable of shooting. Unfortunately for Android users like myself, the iPhone is currently the industry standard for mobile journalists. So to see what I was missing out on, I borrowed an iPhone 4S to try out the awardwinning Filmic Pro, one of the leading apps for mobile video. Filmic Pro offers users more control

Like any rookie reporter, we will also need to keep a close eye on them

over focus, exposure, white balance and other elements compared with the stock iPhone app. I tried it without a tripod in natural light indoors, overcast outdoors, and indoors with artificial light. The focus, exposure and white balance settings were easy to set and change while shooting. It is important to lock these settings or there will be a noticeable judder in your footage as your camera adjusts. The zoom took a little working out – you must use it when focus and exposure are unlocked. There are some handy zoom presets that make the process much smoother. Playing back on TV, the video shot

automated actions with web-based tools like IFTTT. But the ‘Quakebot’ and other recent developments go further than before, showing how journalists can work with developers to automate the preparation of stories where the key source is data. As with science, stories based on sports results are where newsbots are being used successfully. But there is a limit to what robots can do. And other shortcomings have been identified, for example the consequences of a hacker infiltrating an algorithm and spreading misinformation. There is also the issue of transparency and accountability – what are the biases and limitation of a bot? Some developers are now making it clear how their creations work. Robots’ impact on news is likely to have mixed outcomes for journalists. On the plus side, we’ll all be happy if they take care of some of the more mundane aspects of the job. But like any rookie reporter, we will also need to keep a close eye on them. And human journalists will still have to decide on which stories to develop further and follow up on those decisions. Ken Schwencke told the Huffington Post: “It doesn’t eliminate anybody’s job as much as it makes everybody’s job more interesting.”

in good natural light was of excellent quality. The developers say that changing the settings can improve results in low light. When shooting handheld, it makes sense to use the image stabilisation, though a tripod and mount would be wise. The iPhone did get overheated when shooting continuously – something that can be fixed by altering the settings according to the developer’s website. Filmic Pro has basic editing functions and video can be synced to iTunes and uploaded directly to Vimeo and iTunes or cloud apps. Filmic Pro is available through iTunes for £2.99.

THe Journalist magazine, magazine of the National Union of Journalists

THe Journalist magazine, magazine of the National Union of Journalists