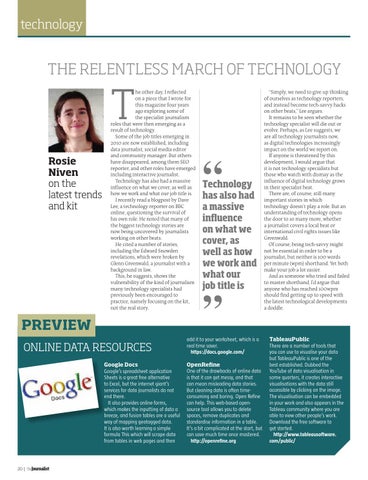 the relentless march of technology

he other day, I reflected on a piece that I wrote for this magazine four years ago exploring some of the specialist journalism roles that were then emerging as a result of technology. Some of the job titles emerging in 2010 are now established, including data journalist, social media editor and community manager. But others have disappeared, among them SEO reporter, and other roles have emerged including interactive journalist. Technology has also had a massive influence on what we cover, as well as how we work and what our job title is. I recently read a blogpost by Dave Lee, a technology reporter on BBC online, questioning the survival of his own role. He noted that many of the biggest technology stories are now being uncovered by journalists working on other beats. He cited a number of stories, including the Edward Snowden revelations, which were broken by Glenn Greenwald, a journalist with a background in law. This, he suggests, shows the vulnerability of the kind of journalism many technology specialists had previously been encouraged to practice, namely focusing on the kit, not the real story.

preview online data resources Google Docs Google’s spreadsheet application Sheets is a great free alternative to Excel, but the internet giant’s services for data journalists do not end there. It also provides online forms, which makes the inputting of data a breeze, and fusion tables are a useful way of mapping geotagged data. It is also worth learning a simple formula This which will scrape data from tables in web pages and then

Technology has also had a massive influence on what we cover, as well as how we work and what our job title is

add it to your worksheet, which is a real time saver. https://docs.google.com/ OpenRefine One of the drawbacks of online data is that it can get messy, and that can mean misleading data stories. But cleaning data is often timeconsuming and boring. Open Refine can help. This web-based opensource tool allows you to delete spaces, remove duplicates and standardise information in a table. It’s a bit complicated at the start, but can save much time once mastered. http://openrefine.org

“Simply, we need to give up thinking of ourselves as technology reporters, and instead become tech-savvy hacks on other beats,” Lee argues. It remains to be seen whether the technology specialist will die out or evolve. Perhaps, as Lee suggests, we are all technology journalists now, as digital technologies increasingly impact on the world we report on. If anyone is threatened by this development, I would argue that it is not technology specialists but those who watch with dismay as the influence of digital technology grows in their specialist beat. There are, of course, still many important stories in which technology doesn’t play a role. But an understanding of technology opens the door to so many more, whether a journalist covers a local beat or international civil rights issues like Greenwald. Of course, being tech-savvy might not be essential in order to be a journalist, but neither is 100 words per minute (wpm) shorthand. Yet both make your job a lot easier. And as someone who tried and failed to master shorthand, I’d argue that anyone who has reached 100wpm should find getting up to speed with the latest technological developments a doddle.

TableauPublic There are a number of tools that you can use to visualise your data but TableauPublic is one of the best established. Dubbed the YouTube of data visualisation in some quarters, it creates interactive visualisations with the data still accessible by clicking on the image. The visualisation can be embedded in your work and also appears in the Tableau community where you are able to view other people’s work. Download the free software to get started. http://www.tableausoftware. com/public/