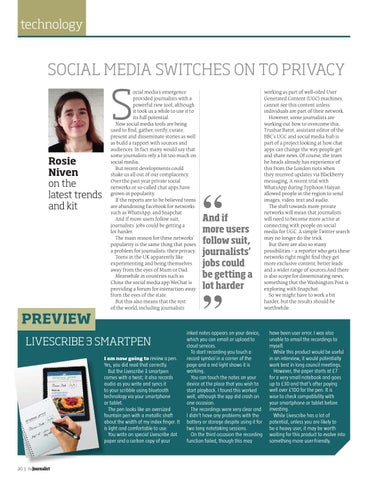 ocial media’s emergence provided journalists with a powerful new tool, although it took us a while to use it to its full potential. Now social media tools are being used to find, gather, verify, curate, present and disseminate stories as well as build a rapport with sources and audiences. In fact many would say that some journalists rely a bit too much on social media. But recent developments could shake us all out of our complacency. Over the past year private social networks or so-called chat apps have grown in popularity. If the reports are to be believed teens are abandoning Facebook for networks such as WhatsApp, and Snapchat And if more users follow suit, journalists’ jobs could be getting a lot harder. The main reason for these networks’ popularity is the same thing that poses a problem for journalists: their privacy. Teens in the UK apparently like experimenting and being themselves away from the eyes of Mum or Dad. Meanwhile in countries such as China the social media app WeChat is providing a forum for interaction away from the eyes of the state. But this also means that the rest of the world, including journalists

livescribe 3 smartpen I am now going to review a pen. Yes, you did read that correctly. But the Livescribe 3 smartpen comes with a twist; it also records audio as you write and syncs it to your scribble using bluetooth technology via your smartphone or tablet. The pen looks like an oversized fountain pen with a metallic shaft about the width of my index finger. It is light and comfortable to use. You write on special Livescribe dot paper and a carbon copy of your

And if more users follow suit, journalists’ jobs could be getting a lot harder

inked notes appears on your device, which you can email or upload to cloud services. To start recording you touch a record symbol in a corner of the page and a red light shows it is working. You can touch the notes on your device at the place that you wish to start playback. I found this worked well, although the app did crash on one occasion. The recordings were very clear and I didn’t have any problems with the battery or storage despite using it for two long notetaking sessions. On the third occasion the recording function failed, though this may

working as part of well-oiled User Generated Content (UGC) machines, cannot see this content unless individuals are part of their network. However, some journalists are working out how to overcome this. Trushar Barot, assistant editor of the BBC’s UGC and social media hub is part of a project looking at how chat apps can change the way people get and share news. Of course, the team he heads already has experience of this from the London riots when they received updates via Blackberry messaging. A recent trial with WhatsApp during Typhoon Haiyan allowed people in the region to send images, video, text and audio. The shift towards more private networks will mean that journalists will need to become more active at connecting with people on social media for UGC. A simple Twitter search may no longer do the trick. But there are also so many possibilities – a reporter who gets these networks right might find they get more exclusive content, better leads and a wider range of sources.And there is also scope for disseminating news, something that the Washington Post is exploring with Snapchat. So we might have to work a bit harder, but the results should be worthwhile.

have been user error. I was also unable to email the recordings to myself. While this product would be useful in an interview, it would potentially work best in long council meetings. However, the paper starts at £7 for a very small notebook and goes up to £30 and that’s after paying well over £100 for the pen. It is wise to check compatibility with your smartphone or tablet before investing. While Livescribe has a lot of potential, unless you are likely to be a heavy user, it may be worth waiting for this product to evolve into something more user-friendly.