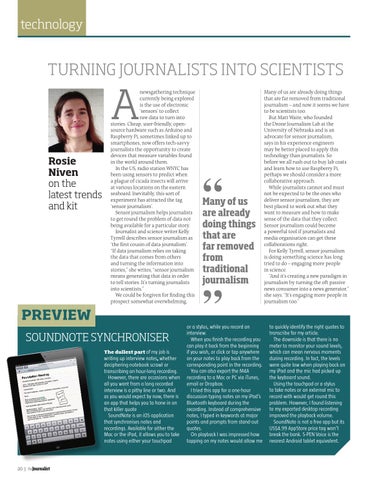 newsgathering technique currently being explored is the use of electronic ‘sensors’ to collect raw data to turn into stories. Cheap, user-friendly, opensource hardware such as Arduino and Raspberry Pi, sometimes linked up to smartphones, now offers tech-savvy journalists the opportunity to create devices that measure variables found in the world around them. In the US, radio station WNYC has been using sensors to predict when a plague of cicada insects will arrive at various locations on the eastern seaboard. Inevitably, this sort of experiment has attracted the tag ‘sensor journalism’. Sensor journalism helps journalists to get round the problem of data not being available for a particular story. Journalist and science writer Kelly Tyrrell describes sensor journalism as ‘the first cousin of data journalism’. “If data journalism relies on taking the data that comes from others and turning the information into stories,” she writes, “sensor journalism means generating that data in order to tell stories. It’s turning journalists into scientists.” We could be forgiven for finding this prospect somewhat overwhelming.

preview soundnote synchroniser The dullest part of my job is writing up interview notes, whether deciphering notebook scrawl or transcribing an hour-long recording. However, there are occasions when all you want from a long recorded interview is a pithy line or two. And as you would expect by now, there is an app that helps you to hone in on that killer quote SoundNote is an iOS application that synchronises notes and recordings. Available for either the Mac or the iPad, it allows you to take notes using either your touchpad

or a stylus, while you record an interview. When you finish the recording you can play it back from the beginning if you wish, or click or tap anywhere on your notes to play back from the corresponding point in the recording. You can also export the M4A recording to a Mac or PC via iTunes, email or Dropbox. I tried this app for a one-hour discussion typing notes on my iPad’s Bluetooth keyboard during the recording. Instead of comprehensive notes, I typed in keywords at major points and prompts from stand-out quotes. On playback I was impressed how tapping on my notes would allow me

Many of us are already doing things that are far removed from traditional journalism – and now it seems we have to be scientists too. But Matt Waite, who founded the Drone Journalism Lab at the University of Nebraska and is an advocate for sensor journalism, says in his experience engineers may be better placed to apply this technology than journalists. So before we all rush out to buy lab coats and learn how to use Raspberry Pi, perhaps we should consider a more collaborative approach. While journalists cannot and must not be expected to be the ones who deliver sensor journalism, they are best placed to work out what they want to measure and how to make sense of the data that they collect. Sensor journalism could become a powerful tool if journalists and media organisation can get these collaborations right. For Kelly Tyrrell, sensor journalism is doing something science has long tried to do – engaging more people in science. “And it’s creating a new paradigm in journalism by turning the oft passive news consumer into a news generator,” she says. “It’s engaging more people in journalism too.”

to quickly identify the right quotes to transcribe for my article. The downside is that there is no meter to monitor your sound levels, which can mean nervous moments during recording. In fact, the levels were quite low when playing back on my iPad and the mic had picked up the keyboard sound. Using the touchpad or a stylus to take notes or an external mic to record with would get round this problem. However, I found listening to my exported desktop recording improved the playback volume. SoundNote is not a free app but its US$4.99 AppStore price tag won’t break the bank. S-PEN Voice is the nearest Android tablet equivalent.