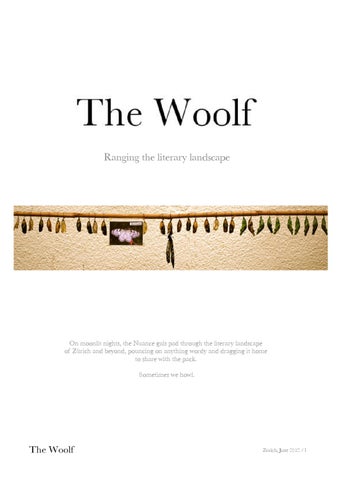 On moonlit nights, the Nuance gals pad through the literary landscape of Z端rich and beyond, pouncing on anything wordy and dragging it home to share with the pack. Sometimes we howl.

Welcome to The Woolf. In this edition:

The Lighthouse Illuminating the literary landscape.

Making Tracks Goings-on in Zürich and beyond.

Nuance is a collective. So is the human race.

“For most of history, Anonymous was a woman.” —Virginia Woolf

In Conversation with Barbara Scott Emmett aka Barbie Scott Jill Prewett interviews a writer with many hats.

You write novels, short stories, plays and – as your alter ego – erotica. Which is the real you? Good question. And one I’ve been trying to answer all my life. Who am I? After thinking about this for a while, I’ve come to realise there isn’t much of a distinction between the different versions of me. When I sit down at my laptop it’s the writer in me that comes out and that writer can take many forms. I enjoy tackling things in a variety of ways – often within the same novel – so whether it’s a serious short story, a crime novel, or a bit of erotic fun, it’s still me who’s writing it. Let’s talk about erotica. It’s a hot topic since E.L. James became such a runaway success with 50 Shades of Grey. Have you read it? I haven’t read 50 Shades but I have picked it up in bookshops and flicked through and I’ve looked at it online. It may be an odd thing to admit but I don’t actually read much erotica. I look at other writers’ work to see how I measure up (no double entendre intended!) and to get ideas but I don’t read it for pleasure. I think I probably will have to read 50 Shades though as it’s such a hot property at the moment.

It’s caused a ruckus in the sexual politics arena. Do you see this story of a submissive woman as a backwards step or as a feminist success? I think it’s important to distinguish between fantasy and reality. I believe many women have fantasies of submissiveness but I’m sure few would want to be that way in real life. Like it or not, punishment, humiliation and even rape are potent fantasies for a lot of women (and men). Being able to admit that is a progressive step: it means women (in the West at least) have reached a stage where they can make their own decisions about their lives, including sexual orientation and preferences. When women themselves can choose to be involved in sado-masochistic fantasies without having that carry over into their everyday lives, that is surely a good thing. In societies where women are punished, humiliated and raped in reality, the fantasy sours. We are fortunate we have made progress to the extent that these things are no longer considered acceptable in our own society (even if they do still occur). To be able to be honest about sexual preferences is a major step forward. Only when women have some power of their own can they admit to weaknesses. I think we’ve reached a stage where we can say,

“Yes, I do enjoy a bit of spanking,” or, “Hmm, I’d quite like to have a penis for a day to see how it feels,” without losing that female power. When approaching an erotic story, how does your approach differ from when you write crime or literary fiction? I write erotica much faster than I write other things. I probably shouldn’t admit it but I am less fussy about my erotic pieces. I don’t spend forever worrying over a word here or a comma there. I still like to produce a well-written, readable story though, and I certainly don’t ignore spelling and grammar. But erotica, for me anyway, is a light-hearted bit of fun to write and, hopefully, to read. I find the same themes cropping up both in my erotica and my more serious writing, however. Sex or a sexual agenda seems always to be present in my straight novels and short stories. It’s a fundamental urge for human beings and has infinite variety, so I expect to go on mining that seam for some time. My other theme is spirituality and that has cropped up in my erotica as well. For me, spirituality and sexuality are two aspect of the same urge – the lifeforce. Any advice on what not to do, when writing erotica? Avoid being too dark and gloomy and always remember the purpose is to excite and titillate. Under-age sex, bestiality and extreme sadistic imagery have no place in erotica. Make it clear that

Sound Bites The Woolf has been talking to authors. This month: a once-trailing spouse, and a winner of the Franz Kafka Prize. Chris Pavone The Woolf: Which was the book that changed your life? Chris: Not really one book, but one writer. I only used to read what I considered high-quality fiction, the kind of books that won Nobel prizes, and I looked down on popular fiction. When I was working at Doubleday, our biggest writer was John Grisham. I dismissed his books as not important because of their success. Then I started reading them. I realised the craft of writing a page-turning thriller is a real craft. There’s something great about any book you can’t put down even if it doesn’t contain a single beautiful sentence. I realised that some books are a form of entertainment, a way to pass pleasant time and maybe learn something you didn’t know. That’s what I tried to do with The Expats. Just write an entertaining book. Image courtesy: www.chrispavone.com

John Banville The Woolf: Would you like to be immortal? John: I’d like to try it out. Although it might get boring. I believe we only see a tiny strip of reality. Dogs and cats can see things we don’t. Ghosts and fancies and fantasies, we create all these things. There is nothing more powerful than the imagination. I don’t believe in life after death. Sometimes I wish I did. But then I think about all the awful people I’d have to meet. I was asked to contribute a short story of six words to an anthology based on the Hemingway legend: “For Sale: baby’s shoes, never worn.” I wrote, “Should have lived more, written less.” But I can’t really believe that. Image courtesy: Picador Zürich, June 2012 /7

The Lighthouse Illuminating the landscape

Why I Love To the Lighthouse: http://forbookssake.net/2012/05/10/5-reasonsto-love-to-the-lighthouse/ Last October’s non-fiction tutor, Andrew Crofts, shared his thoughts on The Wattpad: http://andrewcrofts.blogspot.com/2012/05/cou ld-wattpad-be-greatest-university-of.html

All Things Considered’s contest has a simple premise: Listeners send in original short stories that can be read in three minutes or less. http://www.npr.org/series/105660765/threeminute-fiction At last! A BBC competition that is ONLY open to writers abroad! http://www.bbc.co.uk/worldservice/specialrepo rts/bbc_world_service_international_playwriting _competition_2012.shtml Writer Wanted

“We at www.Expat-Living.info produce guides for expatriates. Our Guides offer expatriates everything they need to know about their destination: the dos and don’ts, tips and hints, practical advice and local contacts. They are written by expats for expats.

“At the moment, we are looking for an author for the Expat-Living.info Guide to Zurich, and we were wondering if maybe one of your writers would be interested? This kind of book can easily be written even by a beginner, and authors Zürich, June 2012 /8

receive ample help from our side. Interested writers can contact us on info@expat-living.info for more information about this unique opportunity.”

As a few eagle-eyed observers already spotted, our very own Jill Prewett (aka JJ Marsh) has published the first in the Beatrice Stubbs series, Behind Closed Doors.

Writers Abroad are seeking submissions of short stories and non-fiction pieces and poetry on the general theme of relationships around the world. The anthology will be print published and later available as an e-book. This year Writers Abroad will be donating all profits made to charity, Books Abroad www.booksabroad.org.uk http://www.writersabroad.com/foreignencounter-submissions.htm

Mini-lit quiz Waknuk is a geographical location … in which book? Last issue’s answer: Friedrich Dürrenmatt, author of The Assignment. (Which Swiss author’s book is “a novella in twenty-four sentences”, inspired by the structure of JS Bach’s The WellTempered Clavier?)

Making Tracks Goings-on in the city of Zürich and beyond

Kaufleuten maintains its high standards of guest writers with an appearance by VS Naipaul – 21 June. http://www.kaufleuten.ch/events/#2657/naipa ul

Bookshop adventures Next time you&#39;re in the Wiedikon area of Zürich, pop into Pile of Books, a gorgeous independent English bookshop, with friendly staff and an excellent selection. http://www.pileofbooks.ch/en/home

Dip in and out of a story at the opening party: In their storytelling performance lasting several hours entitled And on the Thousandth Night, the British cult company Forced Entertainment will transport the audience to far-off places and times. Sitting on the edge of the stage, enveloped in red velvet cloaks, the performers will tell stories of love and abandonment, fear and joy, faraway countries and nearby cities, youth and aging, all with great charm. •

Ulysses on the Limmat: Stages of an Odyssey. Readings from Ulysses at literary locations around the city. http://www.zuercherfestspiele.ch/en/2012/zurich-festival-2012

Author readings in Winterthur Next up, Swedish crime writer, Henning Mankell. (Thanks to Helle for the tip-off !) http://theater.winterthur.ch/spielplan/detail/tst ueck/autoren-auf-der-grossen-buehne-1/ Zürich, June 2012 /10

Issue 2. In which the Woolves range the literary landscape of Zürich and beyond. Interview with Barbara Scott Emmett, Chris Pavone and John Banville. 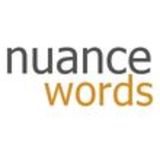