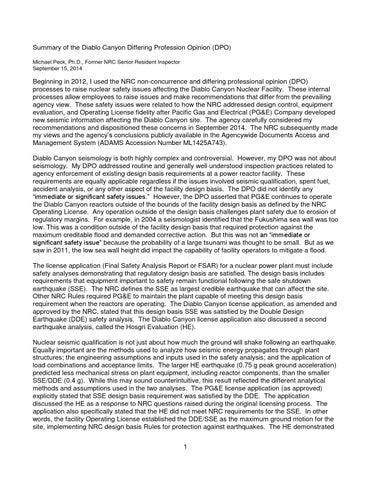 Beginning in 2012, I used the NRC non-concurrence and differing professional opinion (DPO) processes to raise nuclear safety issues affecting the Diablo Canyon Nuclear Facility. These internal processes allow employees to raise issues and make recommendations that differ from the prevailing agency view. These safety issues were related to how the NRC addressed design control, equipment evaluation, and Operating License fidelity after Pacific Gas and Electrical (PG&E) Company developed new seismic information affecting the Diablo Canyon site. The agency carefully considered my recommendations and dispositioned these concerns in September 2014. The NRC subsequently made my views and the agency’s conclusions publicly available in the Agencywide Documents Access and Management System (ADAMS Accession Number ML1425A743). Diablo Canyon seismology is both highly complex and controversial. However, my DPO was not about seismology. My DPO addressed routine and generally well understood inspection practices related to agency enforcement of existing design basis requirements at a power reactor facility. These requirements are equally applicable regardless if the issues involved seismic qualification, spent fuel, accident analysis, or any other aspect of the facility design basis. The DPO did not identify any “immediate or significant safety issues.” However, the DPO asserted that PG&E continues to operate the Diablo Canyon reactors outside of the bounds of the facility design basis as defined by the NRC Operating License. Any operation outside of the design basis challenges plant safety due to erosion of regulatory margins. For example, in 2004 a seismologist identified that the Fukushima sea wall was too low. This was a condition outside of the facility design basis that required protection against the maximum creditable flood and demanded corrective action. But this was not an “immediate or significant safety issue” because the probability of a large tsunami was thought to be small. But as we saw in 2011, the low sea wall height did impact the capability of facility operators to mitigate a flood. The license application (Final Safety Analysis Report or FSAR) for a nuclear power plant must include safety analyses demonstrating that regulatory design basis are satisfied. The design basis includes requirements that equipment important to safety remain functional following the safe shutdown earthquake (SSE). The NRC defines the SSE as largest credible earthquake that can affect the site. Other NRC Rules required PG&E to maintain the plant capable of meeting this design basis requirement when the reactors are operating. The Diablo Canyon license application, as amended and approved by the NRC, stated that this design basis SSE was satisfied by the Double Design Earthquake (DDE) safety analysis. The Diablo Canyon license application also discussed a second earthquake analysis, called the Hosgri Evaluation (HE). Nuclear seismic qualification is not just about how much the ground will shake following an earthquake. Equally important are the methods used to analyze how seismic energy propagates through plant structures; the engineering assumptions and inputs used in the safety analysis; and the application of load combinations and acceptance limits. The larger HE earthquake (0.75 g peak ground acceleration) predicted less mechanical stress on plant equipment, including reactor components, than the smaller SSE/DDE (0.4 g). While this may sound counterintuitive, this result reflected the different analytical methods and assumptions used in the two analyses. The PG&E license application (as approved) explicitly stated that SSE design basis requirement was satisfied by the DDE. The application discussed the HE as a response to NRC questions raised during the original licensing process. The application also specifically stated that the HE did not meet NRC requirements for the SSE. In other words, the facility Operating License established the DDE/SSE as the maximum ground motion for the site, implementing NRC design basis Rules for protection against earthquakes. The HE demonstrated 1