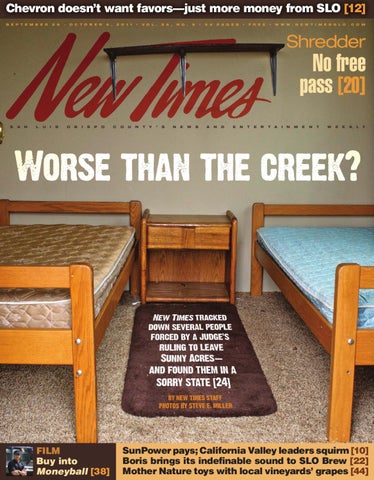 LAST SUPPER The last meal served from outside the condemned dairy barn to Sunny Acres residents who were being evicted by the county—as well as those who remain living in the house—was a somber affair.

What’s happened to the Sunny Acres residents who were evicted?

he basic argument the county and court system made is this: The people living at Sunny Acres are better off anywhere else. But since leaving the sober living facility, some of the 13 people who were forced out of the tents and shacks, pinched off from access to regular meals and group counseling, well, they’re not better. Objectively speaking, many of those people are worse off than they were at Sunny Acres, even if it was a place the county deemed unfit for human habitation. In the weeks following a court decision by San Luis Obispo County Court Judge Charles S. Crandall, ruling that many SUNNy ACRES continued on page 26

GOOD NEWS Tony (no last name given) reacted to the news that he can no longer stay at Sunny Acres. He’s since been sleeping in the creek, at a friend’s campsite in Oceano, and in the open.

MOBILE HOME Brex Owen and Velma Hunt show the car that’s been their home for the last month. Hunt, who suffers from arthritis, sometimes sleeps on the ground outside the car because she finds it less painful to lie flat than on the car seat.

LITTLE COMFORT Owen and Hunt had a night’s reprieve from sleeping in their car when they stayed the night with his two brothers—both of whom are disabled and are about to be forced to leave their apartment. Owen was reluctant to ask for help, but there was trouble brewing at the spot he and his wife normally park to spend the night.

NOWHERE TO GO Dan De Vaul informed Velma Hunt and Brex Owen that they could no longer stay at Sunny Acres on Aug. 25. The couple has since slept in their car various places throughout the county and gone without food for days at a time. Another resident, Caesar (at left, in the background) also had to leave, moving to Iowa to live with friends.

FRIENDS WHO HELP Tony had been found sleeping on some grass outside of a business in Oceano when his two friends Johnny and Mary helped him by allowing him to sleep at a campsite and in Johnny’s van. He was in such terrible shape, Mary called Dan De Vaul to come assist. Both Mary and Johnny were also previously Sunny Acres residents.

Sunny Acres residents would have to go, they’ve turned up in the creeks, or living in their cars behind convenience stores. Some people probably went back to drinking or using drugs; others definitely did. After leaving Sunny Acres—a place where many people went to get sober and stay that way, and a place where it wasn’t uncommon for a few people to get together for an impromptu AA or NA meeting—some of the residents have been found stumbling drunk in downtown SLO or wherever they happen to wind up.

have authority to take care of any and all code violations on the ranch, which could be as severe as demolishing structures, including the shacks since vacated by court order, and the dairy barn that used to serve as a dining hall. Judging by the way Crandall has spoken in court, it seems likely he’ll grant that authority. After all, as he told ranch owner Dan De Vaul during an August court appearance, “I’m not playing games.” That’s a message the former

DOWNWARD SPIRAL Tony, who had lived alcohol free at Sunny Acres, reverted to his old ways when he left the property to live in the creek near the beach in Oceano. Here he’s waiting for Dan De Vaul to pick him up after a couple of nights drinking.

Velma Hunt and Brex Owen lived at Sunny Acres a mere four days. It was the first place that offered a ray of hope, according to Owen, the opportunity for him to work and a safe place for his wife, Hunt. “I would get up and go to work every morning. I worked my butt off,” Owen said proudly. “I enjoyed it.” They’ve been homeless since November when the transmission went

But things changed drastically when Owen’s work dried up. Now, Hunt’s mom is dying from cancer at a nursing home in Morro Bay. Both Hunt and Owen miss seeing her on a daily basis. And since being forced out of Sunny Acres, they live behind a convenience store. It’s the only place they’ve found to park the car overnight. Space in the car is cramped, and they

out in Owen’s truck and he lost his job because he was unable to haul tools and equipment. Before that, Owen and Hunt lived in a two-bedroom apartment in Los Osos along with Hunt’s mom. In nearly a decade of living there, they were never a day late paying their rent.

long to stretch out when they sleep. Hunt even spent one night in the cemetery near the parked car. The following morning, Owen said he picked 10 to 20 ticks off her sleeping bag. They’re often hungry. Yet despite stories of people turning up in cars, the official evaluation remains

submitted to the court based on separate unannounced county inspections at Sunny Acres, the county’s legal team wrote: “Within the sheds and yurt-type structures, there did not appear to be any individuals or personal belongings, but there did remain various furniture or other belongings BEST OF LUCK Mary embraced Tony after Tony expressed the need to go to a detox center. His whereabouts are now unknown. within or near these structures indicating the Sunny Acres residents have received loud potential for human habitation.” and clear. ∆ In other words: No one was found to be living in the structures or eating in the dairy barn, but it looked like they New Times staffers compiled this story. might be. And on Oct. 20, the county is Send comments to Managing Editor scheduled to come back to court with a Ashley Schwellenbach at aschwellenbach@ request to be appointed receiver. If that newtimesslo.com or Staff Photographer Steve request is granted, county officials will E. Miller at semiller@newtimesslo.com. For better or worse

For better or worse