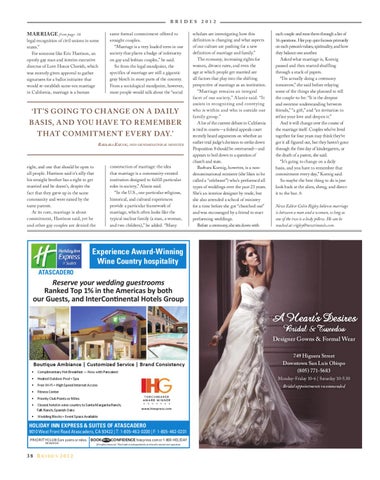 legal recognition of civil unions in some states.” For someone like Eric Harrison, an openly gay man and interim executive director of Love Honor Cherish, which was recently given approval to gather signatures for a ballot initiative that would re-establish same-sex marriage in California, marriage is a human

same formal commitment offered to straight couples. “Marriage is a very loaded term in our society that places a badge of inferiority on gay and lesbian couples,” he said. so from the legal standpoint, the specifics of marriage are still a gigantic gray blotch in most parts of the country. From a sociological standpoint, however, most people would talk about the “social

‘IT’S goIng To ch angE on a DaIly

construction of marriage: the idea that marriage is a community-created institution designed to fulfill particular roles in society,” Alaniz said. “In the U.s., our particular religious, historical, and cultural experiences provide a particular framework of marriage, which often looks like the typical nuclear family (a man, a woman, and two children),” he added. “Many

right, and one that should be open to all people. Harrison said it’s silly that his straight brother has a right to get married and he doesn’t, despite the fact that they grew up in the same community and were raised by the same parents. At its core, marriage is about commitment, Harrison said, yet he and other gay couples are denied the

scholars are investigating how this definition is changing and what aspects of our culture are pushing for a new definition of marriage and family.” The economy, increasing rights for women, divorce rates, and even the age at which people get married are all factors that play into the shifting perspective of marriage as an institution. “Marriage remains an integral facet of our society,” Alaniz said. “It assists in recognizing and conveying who is within and who is outside our family group.” A lot of the current debate in California is tied in courts—a federal appeals court recently heard arguments on whether an earlier trial judge’s decision to strike down Proposition 8 should be overturned—and appears to boil down to a question of church and state. Barbara Koenig, however, is a nondenominational minister (she likes to be called a “celebrant”) who’s performed all types of weddings over the past 23 years. she’s an interior designer by trade, but she also attended a school of ministry for a time before she got “churched out” and was encouraged by a friend to start performing weddings. Before a ceremony, she sits down with

each couple and runs them through a list of 16 questions. Her pop quiz focuses primarily on each person’s values, spirituality, and how they balance one another. Asked what marriage is, Koenig paused and then started shuffling through a stack of papers. “I’m actually doing a ceremony tomorrow,” she said before relaying some of the things she planned to tell the couple-to-be: “It is the deepest and sweetest understanding between friends,” “a gift,” and “an invitation to refine your love and deepen it.” And it will change over the course of the marriage itself. Couples who’ve lived together for four years may think they’ve got it all figured out, but they haven’t gone through the first day of kindergarten, or the death of a parent, she said. “It’s going to change on a daily basis, and you have to remember that commitment every day,” Koenig said. so maybe the best thing to do is just look back at the alien, shrug, and direct it to the bar. ∆ News Editor Colin Rigley believes marriage is between a man and a woman, so long as one of the two is a body pillow. He can be reached at crigley@newtimesslo.com.

Reserve your wedding guestrooms Ranked Top 1% in the Americas by both our Guests, and InterContinental Hotels Group

All rights reserved. This hotel is independently and locally owned and operated.