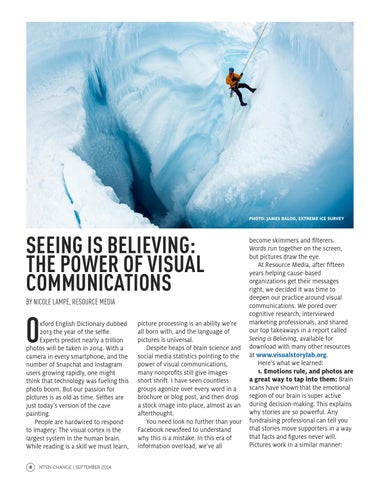 SEEING IS BELIEVING: THE POWER OF VISUAL COMMUNICATIONS BY NICOLE LAMPE, RESOURCE MEDIA

xford English Dictionary dubbed 2013 the year of the selﬁe. Experts predict nearly a trillion photos will be taken in 2014. With a camera in every smartphone, and the number of Snapchat and Instagram users growing rapidly, one might think that technology was fueling this photo boom. But our passion for pictures is as old as time. Selﬁes are just today’s version of the cave painting. People are hardwired to respond to imagery: The visual cortex is the largest system in the human brain. While reading is a skill we must learn, 8

picture processing is an ability we’re all born with, and the language of pictures is universal. Despite heaps of brain science and social media statistics pointing to the power of visual communications, many nonproﬁts still give images short shrift. I have seen countless groups agonize over every word in a brochure or blog post, and then drop a stock image into place, almost as an afterthought. You need look no further than your Facebook newsfeed to understand why this is a mistake. In this era of information overload, we’ve all

become skimmers and ﬁlterers. Words run together on the screen, but pictures draw the eye. At Resource Media, after ﬁfteen years helping cause-based organizations get their messages right, we decided it was time to deepen our practice around visual communications. We pored over cognitive research, interviewed marketing professionals, and shared our top takeaways in a report called Seeing is Believing, available for download with many other resources at www.visualstorylab.org. Here’s what we learned: 1. Emotions rule, and photos are a great way to tap into them: Brain scans have shown that the emotional region of our brain is super active during decision-making. This explains why stories are so powerful. Any fundraising professional can tell you that stories move supporters in a way that facts and ﬁgures never will. Pictures work in a similar manner: