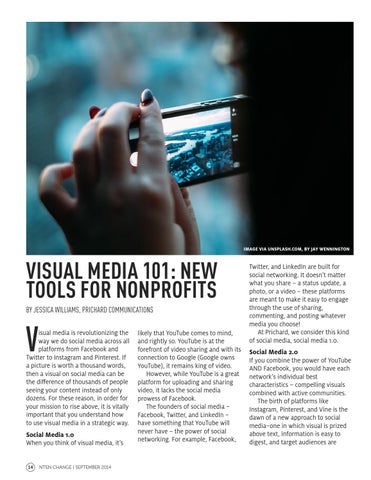 IMAGE VIA UNSPLASH.COM, BY JAY WENNINGTON

isual media is revolutionizing the way we do social media across all platforms from Facebook and Twitter to Instagram and Pinterest. If a picture is worth a thousand words, then a visual on social media can be the diﬀerence of thousands of people seeing your content instead of only dozens. For these reason, in order for your mission to rise above, it is vitally important that you understand how to use visual media in a strategic way. Social Media 1.0 When you think of visual media, it’s

Twitter, and LinkedIn are built for social networking. It doesn’t matter what you share – a status update, a photo, or a video – these platforms are meant to make it easy to engage through the use of sharing, commenting, and posting whatever media you choose! At Prichard, we consider this kind of social media, social media 1.0. Social Media 2.0 If you combine the power of YouTube AND Facebook, you would have each network’s individual best characteristics – compelling visuals combined with active communities. The birth of platforms like Instagram, Pinterest, and Vine is the dawn of a new approach to social media–one in which visual is prized above text, information is easy to digest, and target audiences are