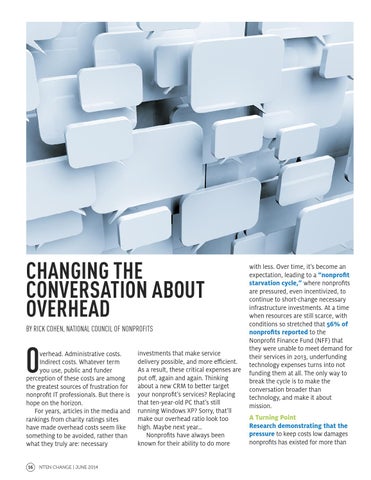 CHANGING THE CONVERSATION ABOUT OVERHEAD BY RICK COHEN, NATIONAL COUNCIL OF NONPROFITS

verhead. Administrative costs. Indirect costs. Whatever term you use, public and funder perception of these costs are among the greatest sources of frustration for nonproﬁt IT professionals. But there is hope on the horizon. For years, articles in the media and rankings from charity ratings sites have made overhead costs seem like something to be avoided, rather than what they truly are: necessary

investments that make service delivery possible, and more eﬃcient. As a result, these critical expenses are put oﬀ, again and again. Thinking about a new CRM to better target your nonproﬁt’s services? Replacing that ten-year-old PC that’s still running Windows XP? Sorry, that’ll make our overhead ratio look too high. Maybe next year… Nonproﬁts have always been known for their ability to do more

with less. Over time, it’s become an expectation, leading to a “nonproﬁt starvation cycle,” where nonproﬁts are pressured, even incentivized, to continue to short-change necessary infrastructure investments. At a time when resources are still scarce, with conditions so stretched that 56% of nonproﬁts reported to the Nonproﬁt Finance Fund (NFF) that they were unable to meet demand for their services in 2013, underfunding technology expenses turns into not funding them at all. The only way to break the cycle is to make the conversation broader than technology, and make it about mission. A Turning Point Research demonstrating that the pressure to keep costs low damages nonproﬁts has existed for more than

Reinventing the Ask: Fundraising in the Digital Age 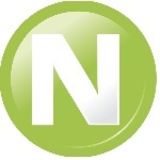