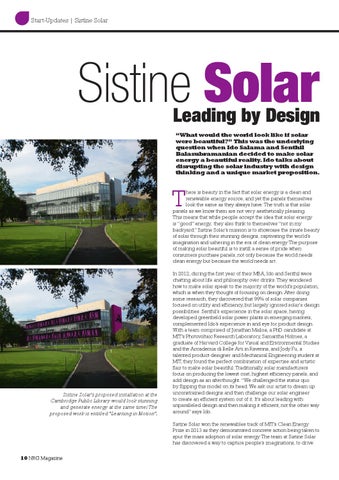 Leading by Design “What would the world look like if solar were beautiful?” This was the underlying question when Ido Salama and Senthil Balasubramanian decided to make solar energy a beautiful reality. Ido talks about disrupting the solar industry with design thinking and a unique market proposition.

here is beauty in the fact that solar energy is a clean and renewable energy source, and yet the panels themselves look the same as they always have. The truth is that solar panels as we know them are not very aesthetically pleasing. This means that while people accept the idea that solar energy is “good” energy, they also think to themselves “not in my backyard.” Sistine Solar’s mission is to showcase the innate beauty of solar through their stunning designs, captivating the world’s imagination and ushering in the era of clean energy. The purpose of making solar beautiful is to instill a sense of pride when consumers purchase panels, not only because the world needs clean energy but because the world needs art.

Sistine Solar's proposed installation at the Cambridge Public Library would look stunning and generate energy at the same time! The proposed work is entitled "Learning in Motion".

In 2012, during the first year of their MBA, Ido and Senthil were chatting about life and philosophy over drinks. They wondered how to make solar speak to the majority of the world’s population, which is when they thought of focusing on design. After doing some research, they discovered that 99% of solar companies focused on utility and efficiency, but largely ignored solar's design possibilities. Senthil’s experience in the solar space, having developed greenfield solar power plants in emerging markets, complemented Ido’s experience in and eye for product design. With a team comprised of Jonathan Mailoa, a PhD candidate at MIT’s Photovoltaic Research Laboratory, Samantha Holmes, a graduate of Harvard College for Visual and Environmental Studies and the Accademia di Belle Arti in Ravenna, and Jody Fu, a talented product designer and Mechanical Engineering student at MIT, they found the perfect combination of expertise and artistic flair to make solar beautiful. Traditionally, solar manufacturers focus on producing the lowest cost, highest efficiency panels, and add design as an afterthought. “We challenged the status quo by flipping this model on its head. We ask our artist to dream up unconstrained designs and then challenge our solar engineer to create an efficient system out of it. It’s about leading with unparalleled design and then making it efficient, not the other way around” says Ido. Sistine Solar won the renewables track of MIT’s Clean Energy Prize in 2013 as they demonstrated concrete action being taken to spur the mass adoption of solar energy. The team at Sistine Solar has discovered a way to capture people’s imaginations, to drive 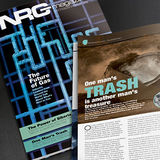 This edition of NRG Magazine is about great companies, acting far ahead of their times, and innovators, whose game-changing ideas are becomi...

This edition of NRG Magazine is about great companies, acting far ahead of their times, and innovators, whose game-changing ideas are becomi...