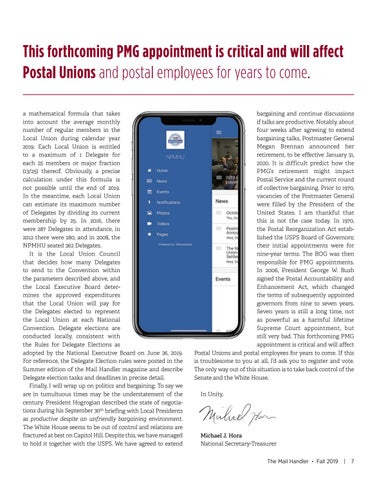 This forthcoming PMG appointment is critical and will affect Postal Unions and postal employees for years to come. a mathematical formula that takes into account the average monthly number of regular members in the Local Union during calendar year 2019. Each Local Union is entitled to a maximum of 1 Delegate for each 25 members or major fraction (13/25) thereof. Obviously, a precise calculation under this formula is not possible until the end of 2019. In the meantime, each Local Union can estimate its maximum number of Delegates by dividing its current membership by 25. In 2016, there were 287 Delegates in attendance, in 2012 there were 280, and in 2008, the NPMHU seated 362 Delegates. It is the Local Union Council that decides how many Delegates to send to the Convention within the parameters described above, and the Local Executive Board determines the approved expenditures that the Local Union will pay for the Delegates elected to represent the Local Union at each National Convention. Delegate elections are conducted locally, consistent with the Rules for Delegate Elections as adopted by the National Executive Board on June 26, 2019. For reference, the Delegate Election rules were posted in the Summer edition of the Mail Handler magazine and describe Delegate election tasks and deadlines in precise detail. Finally, I will wrap up on politics and bargaining. To say we are in tumultuous times may be the understatement of the century. President Hogrogian described the state of negotiations during his September 30th briefing with Local Presidents as productive despite an unfriendly bargaining environment. The White House seems to be out of control and relations are fractured at best on Capitol Hill. Despite this, we have managed to hold it together with the USPS. We have agreed to extend

bargaining and continue discussions if talks are productive. Notably, about four weeks after agreeing to extend bargaining talks, Postmaster General Megan Brennan announced her retirement, to be effective January 31, 2020. It is difficult predict how the PMG’s retirement might impact Postal Service and the current round of collective bargaining. Prior to 1970, vacancies of the Postmaster General were filled by the President of the United States. I am thankful that this is not the case today. In 1970, the Postal Reorganization Act established the USPS Board of Governors; their initial appointments were for nine-year terms. The BOG was then responsible for PMG appointments. In 2006, President George W. Bush signed the Postal Accountability and Enhancement Act, which changed the terms of subsequently appointed governors from nine to seven years. Seven years is still a long time, not as powerful as a harmful lifetime Supreme Court appointment, but still very bad. This forthcoming PMG appointment is critical and will affect Postal Unions and postal employees for years to come. If this is troublesome to you at all, I’d ask you to register and vote. The only way out of this situation is to take back control of the Senate and the White House. In Unity,