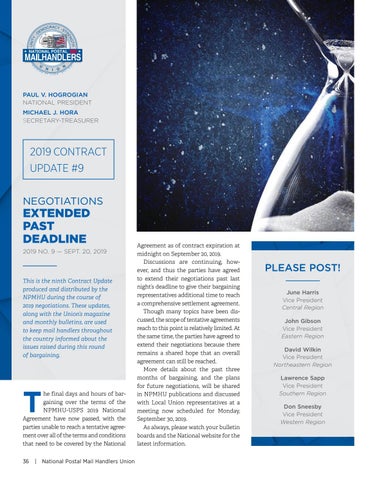 This is the ninth Contract Update produced and distributed by the NPMHU during the course of 2019 negotiations. These updates, along with the Union’s magazine and monthly bulletins, are used to keep mail handlers throughout the country informed about the issues raised during this round of bargaining.

he final days and hours of bargaining over the terms of the NPMHU-USPS 2019 National Agreement have now passed, with the parties unable to reach a tentative agreement over all of the terms and conditions that need to be covered by the National 36 | National Postal Mail Handlers Union

Agreement as of contract expiration at midnight on September 20, 2019. Discussions are continuing, however, and thus the parties have agreed to extend their negotiations past last night’s deadline to give their bargaining representatives additional time to reach a comprehensive settlement agreement. Though many topics have been discussed, the scope of tentative agreements reach to this point is relatively limited. At the same time, the parties have agreed to extend their negotiations because there remains a shared hope that an overall agreement can still be reached. More details about the past three months of bargaining, and the plans for future negotiations, will be shared in NPMHU publications and discussed with Local Union representatives at a meeting now scheduled for Monday, September 30, 2019. As always, please watch your bulletin boards and the National website for the latest information.