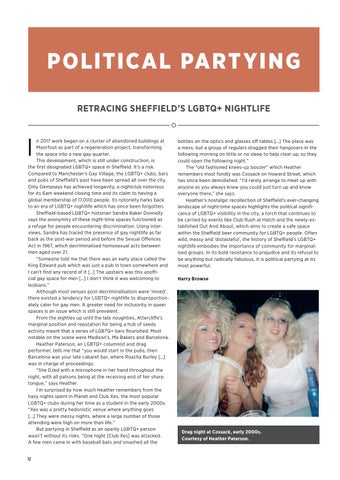 n 2017 work began on a cluster of abandoned buildings at Moorfoot as part of a regeneration project, transforming the space into a new gay quarter. This development, which is still under construction, is the first designated LGBTQ+ space in Sheffield. It’s a risk. Compared to Manchester’s Gay Village, the LGBTQ+ clubs, bars and pubs of Sheffield’s past have been spread all over the city. Only Dempseys has achieved longevity, a nightclub notorious for its 6am weekend closing time and its claim to having a global membership of 17,000 people. Its notoriety harks back to an era of LGBTQ+ nightlife which has since been forgotten. Sheffield-based LGBTQ+ historian Sandra Baker Donnelly says the anonymity of these night-time spaces functioned as a refuge for people encountering discrimination. Using interviews, Sandra has traced the presence of gay nightlife as far back as the post-war period and before the Sexual Offences Act in 1967, which decriminalised homosexual acts between men aged over 21. “Someone told me that there was an early place called the King Edward pub which was just a pub in town somewhere and I can’t find any record of it […] The upstairs was this unofficial gay space for men […] I don’t think it was welcoming to lesbians.” Although most venues post-decriminalisation were ‘mixed’, there existed a tendency for LGBTQ+ nightlife to disproportionately cater for gay men. A greater need for inclusivity in queer spaces is an issue which is still prevalent. From the eighties up until the late noughties, Attercliffe’s marginal position and reputation for being a hub of seedy activity meant that a series of LGBTQ+ bars flourished. Most notable on the scene were Madison’s, Ma Bakers and Barcelona. Heather Paterson, an LGBTQ+ columnist and drag performer, tells me that “you would start in the pubs, then Barcelona was your late cabaret bar, where Roacha Burley […] was in charge of proceedings. “She DJed with a microphone in her hand throughout the night, with all patrons being at the receiving end of her sharp tongue,” says Heather. I’m surprised by how much Heather remembers from the hazy nights spent in Planet and Club Xes, the most popular LGBTQ+ clubs during her time as a student in the early 2000s. “Xes was a pretty hedonistic venue where anything goes […] They were messy nights, where a large number of those attending were high on more than life.” But partying in Sheffield as an openly LGBTQ+ person wasn’t without its risks. “One night [Club Xes] was attacked. A few men came in with baseball bats and smashed all the

bottles on the optics and glasses off tables […] The place was a mess, but a group of regulars dragged their hangovers in the following morning on little or no sleep to help clear up, so they could open the following night.” The “old fashioned knees-up boozer” which Heather remembers most fondly was Cossack on Howard Street, which has since been demolished. “I’d rarely arrange to meet up with anyone as you always knew you could just turn up and know everyone there,” she says. Heather’s nostalgic recollection of Sheffield’s ever-changing landscape of night-time spaces highlights the political significance of LGBTQ+ visibility in the city, a torch that continues to be carried by events like Club Rush at Hatch and the newly-established Out And About, which aims to create a safe space within the Sheffield beer community for LGBTQ+ people. Often wild, messy and ‘distasteful’, the history of Sheffield’s LGBTQ+ nightlife embodies the importance of community for marginalised groups. In its bold resistance to prejudice and its refusal to be anything but radically fabulous, it is political partying at its most powerful. Harry Browse 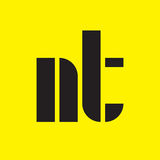