NOW THEN. ISSUE 7. A MAGAZINE FOR MANCHESTER. 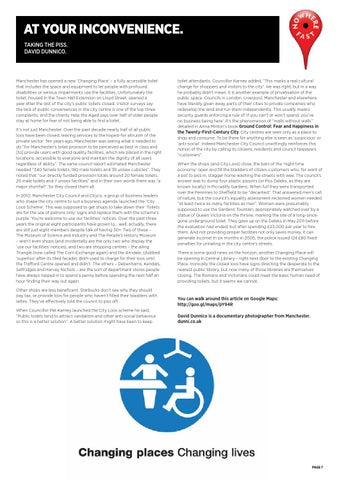 At Your Inconvenience. Taking The Piss. David Dunnico.

Manchester has opened a new ‘Changing Place’ – a fully accessible toilet that includes the space and equipment to let people with profound disabilities or serious impairments use the facilities. Unfortunately the toilet, housed in the Town Hall Extension on Lloyd Street, opened a year after the last of the city’s public toilets closed. Visitor surveys say the lack of public conveniences in the city centre is one of the top three complaints, and the charity Help the Aged says over half of older people stay at home for fear of not being able to find a toilet. It’s not just Manchester. Over the past decade nearly half of all public loos have been closed, leaving services to the hoped-for altruism of the private sector. Ten years ago, Manchester was seeing what it needed to do “for Manchester’s toilet provision to be perceived as best in class and [to] provide users with good quality facilities, which are placed in the right locations, accessible to everyone and maintain the dignity of all users regardless of ability”. The same council report estimated Manchester needed “340 female toilets, 180 male toilets and 39 unisex cubicles”. They noted that “our directly funded provision totals around 20 female toilets, 20 male toilets and 7 unisex facilities” and in their own words there was “a major shortfall”. So they closed them all. In 2010, Manchester City Council and Cityco, a group of business leaders who shape the city centre to suit a business agenda, launched the ‘City Loos Scheme’. This was supposed to get shops to take down their ‘Toilets are for the use of patrons only’ signs and replace them with the scheme’s purple ‘You’re welcome to use our facilities’ notices. Over the past three years the original eight participants have grown to… well, actually, there are still just eight members despite talk of having 30+. Two of these – The Museum of Science and Industry and The People’s History Museum – aren’t even shops (and incidentally are the only two who display the ‘use our facilities’ notices), and two are shopping centres – the ailing Triangle (now called The Corn Exchange again) and the Arndale, (dubbed ‘superloo’ after its tiled facade). Both used to charge for their loos until the Trafford Centre opened and didn’t. The others – Debenhams, Kendals, Selfridges and Harvey Nichols – are the sort of department stores people have always nipped in to spend a penny before spending the next half an hour finding their way out again. Other shops are less beneficent. Starbucks don’t see why they should pay tax, or provide loos for people who haven’t filled their bladders with lattes. They’ve effectively told the council to piss off. When Councillor Pat Karney launched the City Loos scheme he said, “Public toilets tend to attract vandalism and other anti-social behaviour so this is a better solution”. A better solution might have been to keep

toilet attendants. Councillor Karney added, “This marks a real cultural change for shoppers and visitors to the city”. He was right, but in a way he probably didn’t mean. It is another example of privatisation of the public space. Councils in London, Liverpool, Manchester and elsewhere have literally given away parts of their cities to private companies who redevelop the land and run them independently. This usually means security guards enforcing a rule of ‘if you can’t or won’t spend, you’ve no business being here’. It’s the phenomenon of “malls without walls” detailed in Anna Minton’s book Ground Control: Fear and Happiness in the Twenty-First-Century City. City centres are seen only as a place to shop and consume. To be there for anything else is seen as ‘suspicious’ or ‘anti-social’. Indeed Manchester City Council unwittingly reinforces this notion of the city by calling its citizens, residents and council taxpayers “customers”. When the shops (and City Loos) close, the bars of the ‘night time economy’ open and fill the bladders of citizen-customers who, for want of a pot to piss in, stagger home washing the streets with wee. The council’s answer was to dump four plastic pissoirs (or Piss Daleks, as they are known locally) in Piccadilly Gardens. When full they were transported over the Pennines to Sheffield to be “decanted”. That answered men’s call of nature, but the council’s equality assessment reckoned women needed “at least twice as many facilities as men”. Women were presumably supposed to use the Gardens’ fountain, appropriately watched over by a statue of Queen Victoria on the throne, marking the site of a long-sincegone underground toilet. They gave up on the Daleks in May 2011 before the evaluation had ended, but after spending £23,000 per year to hire them. And not providing proper facilities not only saves money, it can generate income! In six months in 2005, the police issued 124 £80 fixed penalties for urinating in the city centre’s streets. There is some good news on the horizon; another Changing Place will be opening in Central Library – right next door to the existing Changing Place. Ironically the closed loos have signs directing the desperate to the nearest public library, but now many of those libraries are themselves closing. The Romans and Victorians could meet the basic human need of providing toilets, but it seems we cannot.

You can walk around this article on Google Maps: http://goo.gl/maps/pY94R David Dunnico is a documentary photographer from Manchester. dunni.co.uk

NOW THEN. ISSUE 7. A MAGAZINE FOR MANCHESTER.

NOW THEN IS A FREE MAGAZINE FOR PEOPLE IN MANCHESTER. 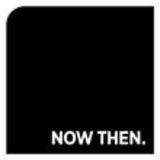