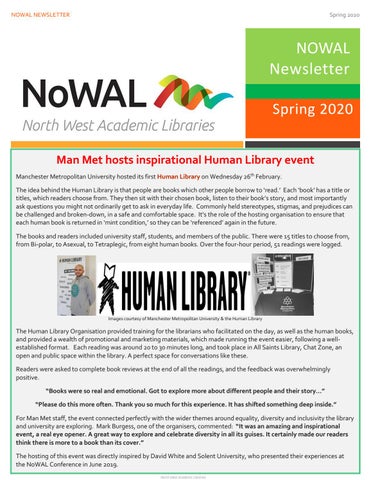 NOWAL Newsletter Spring 2020 Man Met hosts inspirational Human Library event Manchester Metropolitan University hosted its first Human Library on Wednesday 26th February. The idea behind the Human Library is that people are books which other people borrow to ‘read.’ Each ‘book’ has a title or titles, which readers choose from. They then sit with their chosen book, listen to their book’s story, and most importantly ask questions you might not ordinarily get to ask in everyday life. Commonly held stereotypes, stigmas, and prejudices can be challenged and broken-down, in a safe and comfortable space. It’s the role of the hosting organisation to ensure that each human book is returned in ‘mint condition,’ so they can be ‘referenced’ again in the future. The books and readers included university staff, students, and members of the public. There were 15 titles to choose from, from Bi-polar, to Asexual, to Tetraplegic, from eight human books. Over the four-hour period, 51 readings were logged.

The Human Library Organisation provided training for the librarians who facilitated on the day, as well as the human books, and provided a wealth of promotional and marketing materials, which made running the event easier, following a wellestablished format. Each reading was around 20 to 30 minutes long, and took place in All Saints Library, Chat Zone, an open and public space within the library. A perfect space for conversations like these. Readers were asked to complete book reviews at the end of all the readings, and the feedback was overwhelmingly positive. “Books were so real and emotional. Got to explore more about different people and their story…” “Please do this more often. Thank you so much for this experience. It has shifted something deep inside.” For Man Met staff, the event connected perfectly with the wider themes around equality, diversity and inclusivity the library and university are exploring. Mark Burgess, one of the organisers, commented: “It was an amazing and inspirational event, a real eye opener. A great way to explore and celebrate diversity in all its guises. It certainly made our readers think there is more to a book than its cover.” The hosting of this event was directly inspired by David White and Solent University, who presented their experiences at the NoWAL Conference in June 2019.

have a news item to share in the next newsletter

have any ideas for future NoWAL events

For the Being Human 2019, festival of the humanities, Liverpool Hope’s English Department organised an event, under the theme ‘Discoveries and Secrets’, entitled ‘Hidden Histories: Women & Books’. The collaborative event with Dr. Louise Wilson, Assistant Head of English, and local artists, Karen Edwards and Elizabeth Willow, highlighted the role that women have played as collectors, donors, patrons, publishers, illustrators, and readers of books. The event showcased some of the Library’s treasures from the Radcliffe Collection, and new woodblocks were made for the printing workshop, using images from Gerard’s Herbal, dated 1636.

Sustainability initiatives at the University of Chester Staff from the University of Chester libraries recently attended the National NUS Green Gown Awards having been nominated in several categories. The library’s recycled crisp packet ‘Crispmas tree’ became a Twitter sensation. The tree was made from 120 packets of crisps, which is less than 1% of the 13,000 crisps that have been collected at the library since January.

Crisp packets are collected and sent to TerraCycle, an innovative recycling company that has become a global leader in recycling hard-to recycle materials. At TerraCycle, they are turned into plastic pellets which can be used to make benches and plant pots.

LEAP Online success at Bolton Launched in September 2017, LEAP Online is an interactive skills portal designed to support students on their journey at the University of Bolton, both academically and from a personal development perspective. In April 2018 LEAP Online was nationally recognised by achieving the Digital Literacy Award at the LILAC Conference. Over the past three years, the resource has gone on from strength to strength, as shown by the growth in the number of LEAP Online digital badges earned:

Team members have shared their experiences at various NoWAL events and are also part of Special Interest Groups, such as the Academic Librarians group, and Communities of Practice (for Technology and Academic Skills). They engage with their users (both staff and students) via surveys, programme committees, workshops and informally; the qualitative feedback then gained enabled the team to make improvements and to inform the development of new sections. The impressive learning analytics data from the digital badges demonstrates how firmly embedded LEAP Online is in the student journey and the University’s learning and teaching strategy at the University.

Exhibition: the people who built LJMU ‘Educational Pioneers: Fanny Calder, James Gill and the making of a modern university’ is an exhibition at Liverpool John Moores University, due to run till the end of March 2020 (in the Lower Ground Floor of the Aldham Robarts Library). Fanny Calder and James Gill are two educational pioneers in Liverpool who developed schools and expertise in their areas, both beginning their work in the nineteenth century. They made an impact on the city and further afield and contributed to education more broadly. Over a period of many years, the schools that Calder and Gill developed were amalgamated into Liverpool Polytechnic (1992), eventually transforming and expanding to become Liverpool John Moores University as we know it today.

Fanny Calder was a woman of immense importance to the development of women’s education and especially to the emergence and professionalisation of domestic science in Britain. Also featured in the exhibition are: •

Charles Lightoller - served as first officer for the Titanic’s maiden voyage. He was the last survivor taken on board the RMS Carpathia and the most senior member of the crew to survive the disaster. Arthur Rostron – received a Congressional Gold Medal and a Gold Cup donated by the Titanic’s survivors for his role in captaining the RMS Carpathia which rescued 705 survivors due to his valiant efforts.

There are also accounts held in the Student Record Book in Aldham Robarts library of women who trained at the Teacher Training College, which provide a real snapshot of life in the early twentieth century.

To find out more you are welcome to contact Dawn Grundy (D.Grundy@bolton.ac.uk), Academic Librarian, Faculty of Health and Wellbeing, University of Bolton.

Staff Training at EHU ‘Give Your Course a digital MOT’ Edge Hill staff had been looking at how to engage with academic staff who’d been at EHU for a while, proficient at using Blackboard but unaware of new features or how to make the best use of it. After hearing from Lisa Hawksworth at a NoWAL Academic Librarian’s Group meeting about the ‘Copyright MOT’ for the University of Liverpool’s VLE learning spaces, Michelle O’Connell suggested something similar for Staff Development Fortnight, loving the connotation of the MOT to highlight issues and fixes – in this case, to tidy up and make compliant any documents in the VLE by, for example, using digitisation. ‘Give Your Course a digital MOT’ is now offered by EHU Learning Technologists to help academics to create an action plan to ‘fine tune’ their courses using the latest Blackboard tools. At an event in July, the theme was taken further, with visitors given the chance to build a LEGO® car and see how far it could go on a downhill track – with a ‘Top Gear’ style leaderboard. It was a lot of fun!

Staff Development Fortnight Staff had identified a need for follow-up training with academics a few months after induction meetings, once staff had settled in and the academic term was finished. Training was on offer all year, but sessions could be difficult to find & book / clashed with other commitments. ‘Staff Development Fortnight’ aimed to coincide with a time when staff were free to focus on their own professional development. Learning Services was represented across the board and staff were confident that they had ‘something for everyone’, marketing the Fortnight using high-quality materials produced by graphic designers, from email and print flyers to the online catalogue of sessions. 280 staff have attended sessions during the 3 Fortnights, with 34% attending more than one session. They have provided an opportunity to refresh and relaunch training sessions, try new ideas and respond to feedback rapidly. They have had the additional benefit of raising the profile of Learning Services amongst academic colleagues.

The University of Manchester’s Library has received a grant of over £87k from the Arts Council England to tackle the challenges involved in managing and making accessible modern literary archives in digital formats.

UCLan Archives grow The University of Central Lancashire’s library is working with the People’s History Museum in Manchester to digitise the Labour Party Conference Archive back to the first conference in 1900. It will then be made available open access. Each volume will go through an OCR process to make the documents searchable. The digitised content will be hosted on UCLan’s institutional repository (CLoK) with a link to it from the People’s History Museum Labour History Archive site.

Entitled Palladium (Providing Access to Large Literary Archives in a Digital Medium), the project will focus on the archive of the Carcanet Press, a Manchester based poetry publisher which celebrated its 50th anniversary in 2019. Image courtesy of the People’s History Museum

The library’s Special Collections department also recently received a donation of paintings by George Gibbs FRAS, curator of the Moor Park observatory and past president of the Harris Institute (one of UCLan’s previous iterations). The paintings depict Preston and the surrounding area.

The project will run till June 2020 and aims to generate fresh quanitative and qualitative evidence from a national sample of undegraduate students, culminating in a strategic insight report and set of recommendations for the libraries involved.

NWFA contributes to Mancunia North West Film Archive footage has been used in a film which reimagines the city of Manchester. The 30-minute movie shows the city set against poetry from ‘Mancunia’, the book by Michael Symmons Roberts (poet and Professor at Manchester Metropolitan University). The film is a collaboration between Symmons Roberts and filmmaker, Steve Hawley, who scoured hundreds of hours of film drawn together by Marion Hewitt, Director of the NWFA, to knit together moving pictures from the city.

ILLs Service Improvements The Inter Library Loan service at the University of Manchester has been replaced by the Order a Book and Order an Article services. Staff and students can now use these services to order material they need for their research that the Library doesn’t hold. The new streamlined processes aim to significantly improve the customer experience.