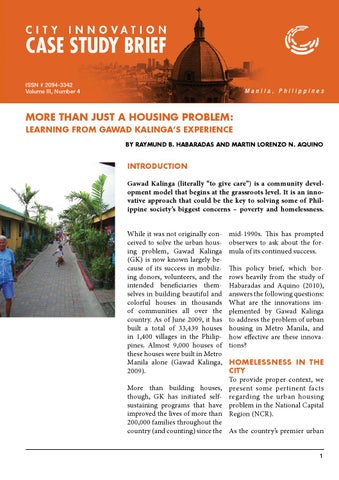 MORE THAN JUST A HOUSING PROBLEM: LEARNING FROM GAWAD KALINGA’S EXPERIENCE BY RAYMUND B. HABARADAS AND MARTIN LORENZO N. AQUINO

INTRODUCTION Gawad Kalinga (literally “to give care”) is a community development model that begins at the grassroots level. It is an innovative approach that could be the key to solving some of Philippine society’s biggest concerns – poverty and homelessness. While it was not originally conceived to solve the urban housing problem, Gawad Kalinga (GK) is now known largely because of its success in mobilizing donors, volunteers, and the intended bene ciaries themselves in building beautiful and colorful houses in thousands of communities all over the country. As of June 2009, it has built a total of 33,439 houses in 1,400 villages in the Philippines. Almost 9,000 houses of these houses were built in Metro Manila alone (Gawad Kalinga, 2009).

mid-1990s. is has prompted observers to ask about the formula of its continued success. is policy brief, which borrows heavily from the study of Habaradas and Aquino (2010), answers the following questions: What are the innovations implemented by Gawad Kalinga to address the problem of urban housing in Metro Manila, and how eﬀective are these innovations? HOMELESSNESS IN THE CITY To provide proper context, we present some pertinent facts regarding the urban housing problem in the National Capital Region (NCR).

More than building houses, though, GK has initiated selfsustaining programs that have improved the lives of more than 200,000 families throughout the country (and counting) since the As the country’s premier urban

center, Metro Manila serves as a magnet to migrants from the provinces seeking opportunities in the city. Many of these people have not been able to aﬀord adequate housing due to the higher cost of city living and to diﬃculties in securing sources of livelihood. us, they resort to informal settling.

ness by itself. is requires the cooperation of various sectors of society. Fortunately, Gawad Kalinga provides a viable and replicable model that spells out the critical roles that must be played by the private sector, non-government organizations, academe, concerned citizens, and the community members themselves to solve a problem of According to SRTC (2010), the this magnitude. total number of informal settlers (in terms of households) in INNOVATION OF GAWAD Metro Manila is 199,398, which KALINGA constitutes 36.20% of the total Ratanawahara and Chairatana number of informal settlers in (2009) proposed several dimenthe country. Assuming an aver- sions in examining city innovaage of ve persons per household, tions, namely product, service, this translates to approximately process, position, institution, 996,990 informal settlers. and paradigm. In Gawad Kalinga, the following innovaTo address this problem, vari- tions are integral in its comous government agencies have munity development model: implemented programs and projects (e.g. housing infrastruc- • Empowered communities ture, relocations, and funding (paradigmatic innovation) through long-term mortgages) that implement a that seek to address the housing • Holistic and integrated apneeds of urban settlers. Resource proach (product, service and constraints, however, have preprocess innovations), made vented the government from possible by reaching its housing targets. In the Medium-Term Philippine • Building relationships and nurturing meaningful partDevelopment Plan (MTPDP) nerships (institutional innova2004-2010, the government tion), and enhanced by made provisions for shelter assistance to 1,145,668 households • A strong and credible brand for the period of 2005-2010. But (positioning innovation). this is only around 30% of the country’s total housing need for BUILDING EMPOWERED COMthe said period. MUNITIES

Clearly, government cannot ad- In Gawad Kalinga, the most dress the problem of homeless- important innovation takes the 2

form of a shi in paradigm of what community development ought to be. Instead of looking at members of the poor communities as passive actors (i.e. as mere recipients of donations or as beneficiaries of support programs), GK considers them as active participants in the development process. is is the reason why GK actively engages the kapitbahayan, who must take responsibility for attaining the vision of GK in their respective communities. The members of the community organize themselves into a neighborhood association; they actively participate in the values formation program of GK; and they play a central role in the implementation of the various GK programs (e.g. cleanliness and beautification, peace and

order, community socials and recreation, basic community health care and rst aid, food self suﬃciency, and social service) in the community. rough the help of the caretaker team and the support provided by donors and volunteers, residents become stewards of their own communities. BUILDING RELATIONSH IPS AND NURTURING MEANINGFUL PARTNERSHIPS

The community development model of GK also emphasizes the building of relationships among the diﬀerent actors involved in what it calls a “nation-building” movement. is is the institutional dimension of innovation.

their adopted communities, and made up of “caring and sharing a more enduring relationship is communities, dedicated to eradicate poverty and restore human formed, as a result. dignity” (GKBI, 2009). A HOLISTIC AND INTEGRATED APPROACH

Gawad Kalinga adopts a holistic approach to community development, one that involves educational, health, livelihood and environmental programs, among others. GK programs include the following: (a) GK Child and Youth Development Program, which develops the skills and talents of the kids and youth of GK communities “by inculcating values and providing opportunities that bring out their fullest potentials;” (b) GK Bayan-Anihan, its food self-suﬃciency program; (c) GK Mabuhay, which transforms GK sites into tourist destinations and cultural attractions; and (d) Green Kalinga, which creates environment-friendly projects such as solid waste management, and promotes the use of environment-friendly materials into GK infrastructure as well as the use of renewable energy sources in communities.

Before programs are introduced to the target community, for instance, the caretaker team sets the stage for a continuing relationship with the community members by organizing informal consultation meetings with them, by conversing with them in places where they usually gather, and by familiarizing themselves with the culture of the community. ey also participate in the BUILDING THE GK BRAND community’s social activities, e.g. Contributing to GK’s rapid birthdays, esta, and wakes. growth is the reputation it has built over the years. Gawad KaEven corporate partners and linga has succeeded in creating individual donors are oriented an image that appeals to donors, about Gawad Kalinga by bringing volunteers, and other stakeholdthem to a GK site. rough their ers. For example, GK is fashioned interaction with the members of as a nation-building movement. the kapitbahayan, these benefac- It seeks to build a nation “emtors become more involved in powered by people with faith the various programs of GK in and patriotism” and one that is

Since it was founded in 1995, Gawad Kalinga has managed to put a unique spin to its programs and activities. Because of this, GK has always looked fresh and dynamic to interested observers. For example, GK was originally known for building “faith communities” because of its values formation programs, and because of its association with the Couples for Christ. When it made inroads in building homes in war-torn Mindanao, GK communities were dubbed as “peace zones” where Muslims and Christians work together to address poverty. Recently, GK communities have become “eco-friendly villages” as well because they have begun to integrate environmentally-sound practices in their way of living. GK villages have also been transformed into “tourist spots” that showcase the inherent charm and uniqueness of each place. POLICY IMPLICATIONS Gawad Kalinga’s experience shows us that it is not just a “housing problem” that the country has to confront. e problem of homelessness must be viewed from a systemic perspective. e solution goes beyond allocating resources to secure land and to build enough houses that the poor can afford. It requires a holistic approach that includes values formation, health pro3

grams, livelihood, and environmental sustainability, among others. While the cooperation of various government agencies, private companies, local government units, and individual donors are critical in sustaining these programs, these efforts must be anchored on a stable and empowered community, whose members play a central role in addressing their present needs and in charting their collective future. It must be acknowledged that Republic Act 7279 or the “Urban Development and Housing Act of 1992.” RA 7279 is an appropriate piece of legislation, It provides for the implementation of a “comprehensive and continuing” Urban Development and Housing Program, the aims of which are to “upli the conditions of the underprivileged and homeless citizens in urban areas and in resettlement areas by making available to them decent housing at aﬀordable cost, basic services, and employment opportunities” and to “adopt workable policies to regulate and direct urban growth and expansion towards a dispersed urban net and more balanced urban-rural interdependence.” e Program also seeks to “improve the capability of local government units in undertaking urban development and housing programs and projects,” and encourages “more eﬀective people’s participation in the 4

urban development process.” However, community empowerment and livelihood programs are clearly not central strategies as envisioned by the law, which expectedly focused on the following areas: (a) land use, inventory, acquisition, and disposition; (b) socialized housing procedures; (c) resettlement; (d) the community mortgage program; (e) program implementation, and (f) funding. Even the revised National Urban Development and Housing Framework (NUDHF 20092016) underplays, if not totally ignores, the role of an empowered community. Instead, it places the burden of addressing the “housing problem” on the local government units (LGUs), government agencies such as the National Housing Authority (NHA), and the private sector.

concerning land ownership, land use, and security of tenure are critical. Implementing appropriate economic policies and strengthening governance are equally important in promoting overall urban development. us, government must focus on its The GK experience, however, role as a “facilitator” rather than tells us that an empowered com- as a “giver”. munity is the cornerstone of a successful housing initiative. Policy makers must also realize Even the poorest communities that the problem of informal setthat have adopted the GK way tling and homelessness requires succeeded in building homes more than an economic and even if they did not have access logistical solution. Building the to housing credit. is demol- physical infrastructure is imporishes the unquestioned premise tant, but strengthening the social that economic growth and the infrastructure is indispensable. resulting increase in income are requisites to solving the housing Given these insights, some policy options that can be considered problem. as refinements to the already is is not to say that govern- comprehensive set of strategies ment should play a peripheral identi ed in the NUDHF 2009role. Resolving the legal issues 2016 are as follows:

housing programs. Values 1. Reckon bene ciaries of socialformation programs, educaized housing programs not as tion, health programs, and individuals (as indicated in livelihood programs must go Article V Section 16 of R.A. hand-in-hand with the actual 7279) but as groups of individbuilding of homes. uals belonging to an organized community or neighborhood 3. Encourage partnerships beassociation. Programs must tween national government be geared towards empoweragencies and Gawad Kalinga ing the community rather (or other similar groups) in than just providing nancial implementing projects at the support. community level.

strategic planning, but also in terms of organizing communities and establishing linkages with national government agencies, NGOs, and private businesses that could help in initiating and implementing programs in the community. 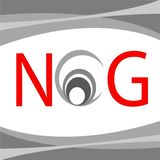