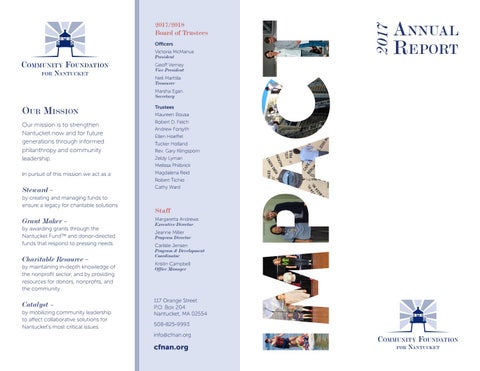 Our Mission Our mission is to strengthen Nantucket now and for future generations through informed philanthropy and community leadership. In pursuit of this mission we act as a:

Charitable Resource – by maintaining in-depth knowledge of the nonprofit sector, and by providing resources for donors, nonprofits, and the community

# of Funds Under Management

CFN Strategic Plan Goal #1: Growing Nantucket’s Endowment Develop and maintain funds to serve as a permanent legacy for charitable giving on Nantucket. Ensure that the Nantucket Fund will financially support and focus attention on the Island’s most critical needs and initiatives.

Together, we can make a difference. Each year the Community Foundation for Nantucket has made incredible progress by working in partnership with Nantucket stakeholders. We face many of the same challenges here on Nantucket as the rest of our communities do nation-wide. Together, we have the power to create life changing opportunities and find solutions to current problems. By leveraging the talents and resources of all sectors – public, private and philanthropic – we can make an impact with a level of effectiveness that none of us could achieve on our own. By uniting the passion and commitment of donors, community members and nonprofits, we can create sustainable solutions that will continue to change lives for years to come. In this report, you will see how we are making progress on our own Strategic Plan. We are working to become the very best partner we can be for the community of Nantucket. You will also see how the Community Foundation for Nantucket and our partners are taking on the Island’s most pressing challenges. I invite you to learn more about our work, our partners, our stewardship of charitable funds and our legacy fund, the Nantucket Fund. Join us in making an impact and preserving our wonderful community together for the years ahead.

Goal #3: Strengthening our Foundation Develop best in class organizational leadership and recruit staff and trustees who bring new perspectives, skills, and strengths to our organization.

Zeldy Lyman and Duncan A. White

Organizations named twice have had funding separated into two categories

In addition to our annual grants cycle in July, we announced our first matching grant from the Nantucket Fund. During the fall of 2017, we matched any gift made to Nantucket Food, Fuel, and Rental Assistance up to $10,000. We were thrilled that this Nantucket Fund challenge was met more than three times over, raising $40,000 to help provide direct support to Nantucketers. "This grant is an important signal of the power of philanthropy to rally around the needs of the people who live on the island. The Nantucket Fund matching grant played a critical role in helping us launch our annual appeal and will help us provide much needed services to Nantucketers, year round!" ~ Janis Carreiro, Executive Director of Nantucket Food, Fuel and Rental Assistance

The number of hours a day Small Friends

of Nantucket is able to provide childcare.

A Nantucket Fund grant helped them offer extended hours for our islandâ&#x20AC;&#x2122;s

The number of trauma victims who

received regular treatment at A Safe

Place from a trauma therapist supported by the Nantucket Fund.

thanks in part to a Nantucket Fund grant to

The number of Nantucket residents

who participated in the Nantucket

The Community Foundation for Nantucket was honored to assist with the Nantucket Cottage Hospital’s Community Health Initiative. Through this process, the Nantucket Cottage Hospital awarded $762,000 in grant funding to 13 nonprofit recipients. The Community Health Initiative grants were awarded in December of 2017, the first of five grant cycles that will ultimately invest more than $4 million in community health. These grants address the island’s most pressing health issues through collaborative, innovative, and sustainable programs.

The Haul Over Nantucket

Mr. and Mrs. John B. Penrose

first Nonprofit Conference. Funding for this inaugural event is provided by the Joseph and Deidre Smialowski Philanthropy Fund, and world-renowned nonprofit advocate Dan Pallotta will be

our keynote speaker. Dan is the founder and President of the Charity Defense Council, dedicated to transforming the way the public evaluates charities.

Dan’s Uncharitable talk, based on his book “Uncharitable: How Restraints on Nonprofits Undermine Their Potential”, has inspired audiences around the world and we are very excited to have him join us in the Fall.

In 2016, Addiction Solutions of Nantucket created a charitable fund with the Community Foundation while they charted the course of becoming an independent 501c3, to provide medication assisted treatment and counseling to aid in substance abuse recovery. Last year, the Rotary Club of Nantucket identified Addiction Solutions as their major charitable project, and raised over $168,000 through their own CFN Fund. Both funds were retired in early 2018, awarding over $240,000 to Nantucket’s newest charitable nonprofit.

Above: Principles and Supporters of Addictions Solutions of Nantucket at a 2018 Breakfast.

The Community Foundation for Nantucket

The Foundation is dedicated to learning from and collaborating with local

leaders. We have created an Advisory Committee of health care workers,

Nantucket students have access to higher education. In 2017, the Foundation

from this group helps inform our grant making process.

In 2017, we hosted our second annual Advisory Committee gathering. The

The Sally Roberts Mentor Scholarship Fund was one of our new funds in 2017.

This scholarship was established by the Roberts Family to honor Sally’s legacy.

Sally taught physical education at Nantucket Elementary School for over 20

making. As we move into 2018, the Advisory Committee meets more regularly

years and was a constant advocate for children, in and out of the school. This

scholarship is awarded to a student who was an active member of the Mentoring Youth Nantucket Program and is pursuing a career in education.

Zeldy Lyman and Duncan A. White*

Mr. and Mrs. Donald B. Shackelford*

Sarah Schwartz and Will Hannum

Gary A. and Carole P. Beller

The Rev. Bill and Linda Steelman

Nancy Chase’s story is a familiar one. A generational Nantucketer, Nancy owned several properties on Nantucket which had increased in value over time.

Nancy sold one of these properties in 2008, and created a Charitable Remainder Trust which held the proceeds from that sale. This accomplished several things:

Nancy avoided any capital gains on the sale, which would have been significant;

She received income from her trust to support her during her lifetime; and She supported several Nantucket charities with the funds from her trust upon her death.

This past June, we were saddened by the loss of Dick Oman, a member of the Community Foundation’s founding group. Beyond his family, Dick's life passions were philanthropy and a commitment to community, as evidenced by a life of service. Dick served as Secretary, Director, and Counsel to the Columbus Foundation from 1955-to-1977 and as legal advisor for many years following. His insight during our early years proved invaluable, and we are so thankful we had Dick’s counsel and support as our organization grew.

The Community Foundation is honored to be one of those charitable recipients through the Nantucket Fund™ — Nancy left a significant legacy to the Island and We Thank Her!

Mr. and Mrs. Donald B. Shackelford

The Community Foundation recognizes and thanks friends listed below who have arranged a bequest or made a planned gift to the Foundation. Margaret H. Blair †

Memorial gifts include donations made in memory of members of the Nantucket community. In Memory of:

Tribute gifts include donations made in honor of and in celebration of people and special events. In Honor of:

From the Executive Director I am so proud of how the Community Foundation has made a difference on Nantucket this year, thanks to you! Thank you to our donors who believe in our mission. Thank you to our Trustees who support our efforts every day to provide help to Nantucket where it is needed most. Thank you to the amazing women I work with who love what they do, coming to work every day with a smile on their faces. I could not be more grateful, and look forward to another

wonderful year fulfilling our mission to strengthen our Island community.

In 2017, we said goodbye to four Trustees: Bill Frist, Marsha Kotalac, Sue Ottison, and Geoff Smith. We are so grateful for their many years of service and support of the Foundation. We also welcomed two new Trustees (below) as part of our mission to recruit active and insightful community leaders to our Board.

Staff Update In 2017 we welcomed two new staff members to our team. Kristin Campbell (top) joined us as our Office Manager and Carlisle Jensen (bottom) as our Development and Program Coordinator. Krissy and Carlisle are active Nantucketers and like Margaretta and Jeanne, are deeply entrenched in our Islandâ&#x20AC;&#x2122;s year round community. Next time you are on-Island, make sure to stop by our office to say hi.

Maureen joined us as a Trustee in August of 2017. She lives in Wellesley Hills, MA and has enjoyed a summer cottage on Nantucket since 2003. Maureen has a wealth of nonprofit board experience, and has been an invaluable addition to our board and development committee. Maureen and her husband Edward are the parents of Marina, Eamon, Bridget, and Monica.

Neil jumped head first into his role with CFN. He joined our board in early 2017 and become our treasurer in August that same year. Neil is the Senior Vice President and Market Executive at Nantucket Bank, a division of Blue Hills Bank and serves as a board member of many local organizations. Neil has lived on Nantucket since 1991 and is married to Lauren Marttila.

Agency Funds Held For Others

Program Expenses on Behalf of Funds