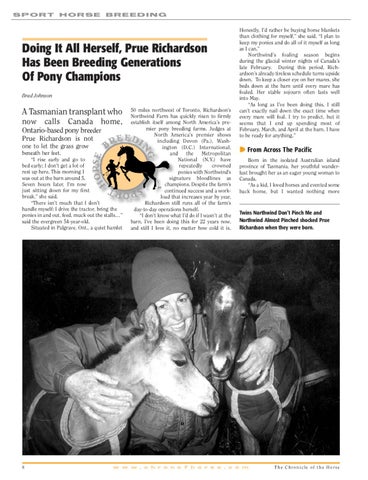 Doing It All Herself, Prue Richardson Has Been Breeding Generations Of Pony Champions Brad Johnson

A Tasmanian transplant who now

Prue Richardson is not one to let the grass grow beneath her feet.

“I rise early and go to bed early; I don’t get a lot of rest up here. This morning I was out at the barn around 5. Seven hours later, I’m now just sitting down for my first break,” she said. “There isn’t much that I don’t handle myself: I drive the tractor, bring the ponies in and out, feed, muck out the stalls…” said the evergreen 54-year-old. Situated in Palgrave, Ont., a quiet hamlet

50 miles northwest of Toronto, Richardson’s Northwind Farm has quickly risen to firmly establish itself among North America’s premier pony breeding farms. Judges at North America’s premier shows including Devon (Pa.), Washington (D.C.) International, and the Metropolitan National (N.Y.) have repeatedly crowned ponies with Northwind’s signature bloodlines as champions. Despite the farm’s continued success and a workload that increases year by year, Richardson still runs all of the farm’s day-to-day operations herself. “I don’t know what I’d do if I wasn’t at the barn. I’ve been doing this for 22 years now, and still I love it, no matter how cold it is.

Honestly, I’d rather be buying horse blankets than clothing for myself,” she said. “I plan to keep my ponies and do all of it myself as long as I can.” Northwind’s foaling season begins during the glacial winter nights of Canada’s late February. During this period, Richardson’s already tireless schedule turns upside down. To keep a closer eye on her mares, she beds down at the barn until every mare has foaled. Her stable sojourn often lasts well into May. “As long as I’ve been doing this, I still can’t exactly nail down the exact time when every mare will foal. I try to predict, but it seems that I end up spending most of February, March, and April at the barn. I have to be ready for anything.”

◗ From Across The Pacific Born in the isolated Australian island province of Tasmania, her youthful wanderlust brought her as an eager young woman to Canada. “As a kid, I loved horses and evented some back home, but I wanted nothing more

Twins Northwind Don’t Pinch Me and Northwind Almost Pinched shocked Prue Richardson when they were born.

The Chronicle of the Horse

Business And Pleasure Although Prue Richardson was raised in an environment where the hunter discipline was absent, she astutely noted and applied three crucial elements when matching mare and stallion. “I believe that the principles of choosing the right one can be narrowed to three things. When I look at a breeding prospect, I want great movement, exceptional jumping ability, and a sound mind. All three elements are critical; I can’t say that one stands out above the other two.“ Though Richardson tries to sell all of her ponies as yearlings, it doesn’t always work out that way. “I try to find a home for all of the crop as soon as I can, but not all of them find one in their first year. This year, I started the season with 17 and have managed to whittle the field to seven.” As a businesswoman, she then must choose which ponies would make good foundation stock or would be better suited to the hunter ring. Richardson starts training those destined for competition on the farm. In spite of all her ponies’ ribbons, her methods are, in her own words, unremarkable. “I consider what I do to be straightforward,” she said. “Honestly, I don’t think my training techniques are exceptional. I start with simple things, just introducing the ponies to prolonged human contact and touch. I then commence grooming, handling, and leadlining them extensively. As soon as they’re ready, I start them with long reins to prepare for things to come.”

When satisfied with the ponies’ initial progress, Richardson sends them to friends Scott and Ann McKay of Limehouse, Ont. The McKays gear the ponies toward a hunter career, starting them off under saddle. Some ponies remain with Richardson, however. Her close bond with her filly Pashmina (Llanarth Senator—Northwind Lucy) embodies Richardson’s personal touch. “Pashmina is one of the family. Her mother died a week after her birth, and, needless to say, we had to take special care to save her. She was bottle-fed until she was strong enough—I even slept with her to keep her warm. “[Pashmina’s] second place at Devon [in 2004] meant so much more to me than any other blue ribbon. That’s a moment that will forever be close to my heart,” she added. “Pashmina will stay at Northwind forever, she’ll never be sold.”

“I consider what I do to be straightforward,” said Prue Richardson, with Northwind Ornamental Tulip.

than to head out and see the rest of the world,” she said. “When I came to Canada, I didn’t have any specific plans to work with ponies. I ended up settling down here in Ontario, and, eventually, I just kind of fell back into it.” Richardson was inspired to introduce her two young children, Amber and Derek, to horses. Richardson had planned for Northwind’s first mare, Ardmore Snowbird, to be her son’s first pony, but the little mare ended up laying the foundation of Northwind’s present-day pony breeding stock. “I tried to get my son into horses, but he just wasn’t that interested. I decided to breed his little mare since I was planning to turn her out anyway. Little did I know where that project would end up,” Richardson recalled. F r i d a y, N o v e m b e r 2 6 , 2 0 0 4

Richardson’s interest mounted after she leased a charismatic Finnish pony called Diffy for her daughter. “We leased her, for a year or so, so that my daughter, at the time 7 or 8, could move up from her small pony. The three of us had so much fun, it really rekindled something within me.” As Amber outgrew Diffy, she switched to a large pony known as E.T., a pony known in the United States as Cowboy’s Angel, by Farnley Cowboy Joe. E.T. would soon unexpectedly join Snowbird in the broodmare pasture. “Amber eventually moved on to a fancy larger mare. Unfortunately, Amber was injured and being laid up, her interest in riding also diminished,” remembered Richardson. “Like Snowbird, I chose to go ahead and breed E.T. I guess that second

one firmly put me into the pony business.” As the pony operation began to snowball, Richardson sought out Len Bigley of Llanarth Stud in Hereford, England, to acquire a breeding stallion. Bigley recommended Bengad Rochea, by Revel Cello. Richardson purchased the Welsh Mountain stallion and brought him to Canada. Bengad Rochea would go on to be a prodigious stallion for Richardson, siring Gaullimaufry Jaguar (out of Liseter Beauty Queen), who in turn sired Orlando (the crossbred colt and gelding champion at Devon in 2002 and the large pony champion at Washington and the Metropolitan National this fall), as well as breeding show champions Barlys Troi de Penrhyn and Penrhyn Wonder Wish. Since Bengad Rochea’s successful addi-

Above: Richardson found Mac-Hill Brooke Dawn and paired him with Rachel Schnurr.

Below: Northwind Corporate Affair was all decked out for Devon (Pa.) with François Flavin.

Northwind now stands seven pony stallions and breeds to more than 100 outside mares a year. “It’s grown to a big operation, certainly bigger than I ever planned, but I still somehow manage to keep it together myself,” Richardson said. Two escape artists delivered earlier this year brought other unforeseen surprises to Northwind. “The vet went in to ultrasound to determine if the mare was indeed having two [foals]. Upon inspection, it seemed that everything was fine and the mare would just be having one. As it turned out, the vet and I didn’t catch the second embryo,” recalled Richardson. “Fortunately, the birth turned out well, so we called them Northwind Don’t Pinch Me and Northwind Almost Pinched in honor of the mistake.” The industrious Richardson also seeks

out local prospects and matches them with junior riders she thinks will fit them. One of her best finds, Dreamboy, won the small pony championship at the 2004 USEF Pony Hunter Finals with Devon Walther. Another surprise, Mac-Hill Brooke Dawn, has had noteworthy results on the Ontario and Canadian circuit with Rachel Schnurr. The pair capped off their year with a ribbonwinning performance at this month’s Royal Winter Fair. According to Richardson, her good fortune as both a breeder and a trainer is exactly that. “I’ll say it again, I firmly believe that I really don’t do anything different from other pony breeders, or breeders in general, for that matter. Yes I’ve had some very nice ponies in my stable, but, thankfully, I’ve just had a good run of luck since I began.”

The Chronicle of the Horse