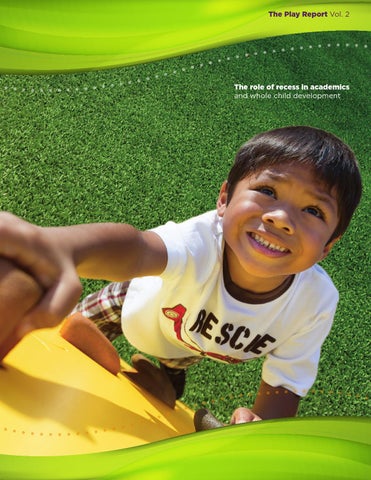 Decreasing daily recess time in order to increase academic preparation became a popular trend in the late 1980s. This was further accelerated by the passage of No Child Left Behind in 2001. To demonstrate their commitment to high academic standards, urban schools in Atlanta constructed schools without playgrounds.

This has not resulted in increased test scores. The Programme for International Student Assessment (PISA), a standardized test given to 15-year-olds in over 40 global venues, data shows that U.S. math and science scores continue to go down below the average, while other countries have increased their scores and international ranking above the U.S.

Changing Times for Recess Since the late 1980s, increasing pressure to improve academic performance has prompted schools to put more time toward classroom studies – time often taken away from recess.

Daily outdoor recess … is the fourth “R” because it helps children learn the other three. - Sandra Waite-Stupiansky and Marcia Findlay, 2001

More than fun and games. The Centers for Disease Control and Prevention define recess as time offered daily for child-directed physical activity and play. â&#x20AC;&#x153;Child-directedâ&#x20AC;? distinguishes recess from organized sports and physical education. And this essential difference accounts for many of the benefits recess brings to whole child development.

Evidence from Asia and America shows improvement in schoolwork when instructional periods are reasonable in length followed by recess breaks.

The playground at recess is one of the few places where todayâ&#x20AC;&#x2122;s children can actively confront, interpret, and learn from meaningful social experiences. - Tom Jambor (1994)

Scientific research holds that recess is a vital component of the school day that offers many benefits for whole child development.

Recess isnâ&#x20AC;&#x2122;t without its challenges. Some principals and administrators view recess as the time of day with the most discipline problems, injuries and liability concerns.

A variety of factors make this unstructured play time a top candidate for cutbacks: Playground bullying – Because recess is often unstructured, playgrounds have been seen as breeding grounds for aggression. However, less than 2% of playground behavior is due to aggression.

Safety concerns – Playground safety encompasses many factors including access, location, presence or absence of crime, and the likelihood of injuries.

Liability concerns – Some school districts limit recess due to fear of lawsuits arising from accidents occurring during outdoor play. However, injury data reveals that 90% of playground injuries are considered minor in nature.

Recess being withheld for punitive/behavioral reasons – African American and Hispanic children from high poverty schools are often denied recess for behavioral issues. However, recess has been shown to contribute to better focus, on-task behavior, and improved behavior in children.

Recess isn’t child’s play for administrators and educators. But experts agree: it’s worth the effort.

Recess represents an unparalleled chance to increase physical activity among an extraordinary number of kids in the U.S. It’s also an underutilized opportunity to improve the overall learning environment in our schools. - Recess Rules, Robert Wood Johnson Foundation, 2007

Mounting evidence links reduced recess time to negative outcomes for children. Health concerns – The number of children ages 6-11 deemed obese has quadrupled in the U.S. in the last four decades. Recess offers children opportunities to be physically active. Participation in daily recess moderates childhood obesity and its associated health complications. Incidence of anxiety and depression – Anxiety disorders and depression diagnoses among children is on the rise. Antidepressant use has tripled over the past decade in children. Play can help protect against anxiety and depression. Underdeveloped social competence – Limiting outdoor recess deprives children from freely socializing with their peers, which may affect the development of social-emotional learning, executive function, and self control. Inflexibility – Unstructured outdoor play helps children develop the creativity and flexibility to thrive in unexpected situations. Limiting or eliminating play stunts their ability to be flexible. Risk aversion – Overprotecting and overmanaging children deprives them of opportunities to be challenged. Play spaces that provide appropriate challenge and risk allow children to sharpen their instincts and build risk-management and adaptive skills. Stifled creativity and imagination – Researchers correlate a decline in childhood creativity to lack of play.

Although the current trend in many schools is to reduce or eliminate recess in order to increase time for academic preparation and improve academic achievement, empirical research does not support the elimination or reduction of recess for these purposes (Anthony D. Pellegrini & Catherine M. Bohn - Gettler, 2013).

Finland: less of this, more of that Finland spends about 30% less per student in their educational system than the United States. They have no mandated standardized tests, apart from one exam at the end of senior year. Also no rankings, no comparisons or competition between students, schools or regions. Teachers in Finland spend fewer hours at school each day and spend less time in classrooms than American teachers. Their children spend far more time playing outside, even in the depths of winter. According to Debbie Rhea, professor and an associate dean at Texas Christian University, Finnish 1st graders spend 4.5 hours a day in school: 3 hours in the classroom and another 1.5 hours at recess or “unstructured outdoor play.” In the United States, a typical 1st grader attends school 7 hours a day, but recess – particularly outdoor play – may not happen at all. Yet Finnish students continue to rank near the top in global academic comparisons. In 2000, the Programme for International Student Assessment (PISA) showed Finnish youth to be the best young readers in the world. By 2003, they led in math. And three years later, Finland was first out of 57 countries in science. Somehow the Finns achieve more by doing less – ironically, less of the things the U.S. has increased in pursuit of more effective education.

Play is important at this age. We value play. - Maija Rintola, Finland educator, 7- and 8-year-olds

What you can do:

Understand Recess and its Benefits Promoting recess as a critical aspect of whole child development requires a team effort. Working together, parents, teachers, school administrators, and policy makers can safeguard this critical developmental activity – not as an alternative to academics, but rather as an essential component for overall educational success.

Know the facts Research identifies the benefits of recess on whole child development, and challenges reducing or eliminating recess from school. Once we understand recess is more than simply “play time,” the better equipped we are to protect it.

Defend recess Children look forward to recess—it is valuable to them. It should not be taken away as a form of punishment. If recess is removed, so will its positive effects as well.

Address societal factors devaluing recess Identify and provide research-based solutions for the barriers to children’s participation in recess. Working together, we can protect the times and spaces for recess to take place.

Respect recess as a key piece to the fitness puzzle Daily recess helps children to meet the recommended 60 minutes of physical activity each day.

Researchers reported that daily recess periods were positively related to academic achievement, academic behaviors, and indicators of cognitive skills and attitudes including concentration, memory, self-esteem, and language skills. - Centers for Disease Control and Prevention, 2010 Article 31 of the United Nations’ Convention on the Rights of the Child (UNICEF, 1991) states that children have the right to relax and play. All kids deserve the fun of recess – along with its many developmental benefits.

Recess offers nearly half of the available opportunity to promote physical activity among kids during the school year. Trying to improve children’s health without focusing on recess forfeits our best chance for reaching students with the greatest need. - Recess Rules, Robert Wood Johnson Foundation, 2007

Ironically, minimizing or eliminating recess may be counterproductive to academic achievement, as a growing body of evidence suggests that recess promotes not only physical health and social development but also cognitive performance. - “The Crucial Role of Recess in School,” Council on School Health

creating a lasting legacy of play

A family-owned and operated U.S. manufacturer of playground equipment for all ages and abilities, Playworld Systems has been creating the worldâ&#x20AC;&#x2122;s best play spaces for more than forty years, one playground at a time. Our systems bring safe, challenging, positive play to schools, public parks and private properties throughout the US and around the world.

As play advocates, we promote excellent play through: Habitat Building quality spaces for quality play, with: • Expert Design that balances confidence with challenge • Superior Craftsmanship for outstanding safety and durability • Accessibility for people of all abilities, and communities of all sizes

The Centers for Disease Control and Prevention (CDCP) www.cdc.gov

The National Association for the Education of Young Children (NAEYC) www.naeyc.org

The Association for the Study of Play (TASP) www.tasplay.org

Learn more – and help us save play! This report was based on The Evolution of School Recess and Corresponding Implications for the Next Generation of Children white paper by Michael M. Patte, Ph.D. Professor of Education, Bloomsburg University of Pennsylvania. For a complimentary copy and more information about the importance of recess to whole child development and academic performance: PlayworldSystems.com/RecessReport The Play Report is made possible in part by Playworld Systems. The Importance of Recess

Recess is more than a break from school, find out why it is so important to development.

The Importance of Recess

Recess is more than a break from school, find out why it is so important to development.