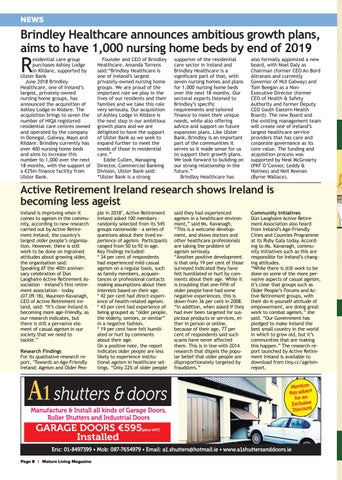 esidential care group purchases Ashley Lodge in Kildare, supported by Ulster Bank June 2018 Brindley Healthcare, one of Ireland’s largest, privately-owned nursing home groups, has announced the acquisition of Ashley Lodge in Kildare. The acquisition brings to seven the number of HIQA registered residential care centres owned and operated by the company in Donegal, Galway, Mayo and Kildare. Brindley currently has over 400 nursing home beds and aims to increase this number to 1,000 over the next 18 months, with the support of a €25m finance facility from Ulster Bank.

Founder and CEO of Brindley Healthcare, Amanda Torrens said:“Brindley Healthcare is one of Ireland’s largest privately-owned nursing home groups. We are proud of the important role we play in the lives of our residents and their families and we take this role very seriously. Our acquisition of Ashley Lodge in Kildare is the next step in our ambitious growth plans and we are delighted to have the support of Ulster Bank as we seek to expand further to meet the needs of those in residential care.” Eddie Cullen, Managing Director, Commercial Banking Division, Ulster Bank said: “Ulster Bank is a strong

supporter of the residential care sector in Ireland and Brindley Healthcare is a significant part of that, with seven nursing homes and plans for 1,000 nursing home beds over the next 18 months. Our sectoral experts listened to Brindley’s specific requirements and tailored finance to meet their unique needs, while also offering advice and support on future expansion plans. Like Ulster Bank, Brindley is an important part of the communities it serves so it made sense for us to support their growth plans. We look forward to building on our strong relationship in the future.” Brindley Healthcare has

also formally appointed a new board, with Noel Daly as Chairman (former CEO An Bord Altranais and currently Governor of NUI Galway) and Tom Beegan as a NonExecutive Director (former CEO of Health &amp; Safety Authority and former Deputy CEO South Eastern Health Board). The new Board and the existing management team will create one of Ireland’s largest healthcare service providers that has care and corporate governance as its core value. The funding and acquisition process was supported by Neal McGroarty (PKF O’Connor, Leddy &amp; Holmes) and Neil Keenan (Byrne Wallace).

ple in 2018’, Active Retirement Ireland asked 100 members – randomly selected from its 545 groups nationwide – a series of questions about their lived experience of ageism. Participants ranged from 50 to 92 in age. Key findings included: * 34 per cent of respondents had experienced mild casual ageism on a regular basis, such as family members, acquaintances or professional contacts making assumptions about their interests based on their age. * 42 per cent had direct experience of health-related ageism. * 43 per cent had experience of being grouped as “older people, the elderly, seniors, or similar” in a negative fashion. * 19 per cent have felt humiliated or hurt by comments about their age. On a positive note, the report indicates older people are less likely to experience institutional ageism in healthcare settings. “Only 22% of older people

said they had experienced ageism in a healthcare environment,” said Ms. Kavanagh, “This is a welcome development, and shows doctors and other healthcare professionals are taking the problem of ageism seriously. “Another positive development is that only 19 per cent of those surveyed indicated they have felt humiliated or hurt by comments about their age. While it is troubling that one-fifth of older people have had some negative experiences, this is down from 36 per cent in 2008. “In addition, when asked if they had ever been targeted for suspicious products or services, either in person or online, because of their age, 77 per cent of respondents said such scams have never affected them. This is in line with 2014 research that dispels the popular belief that older people are disproportionately targeted by fraudsters.”

Community Initiatives Dún Laoghaire Active Retirement Association also heard from Ireland’s Age-Friendly Cities and Counties Programme at its Ruby Gala today. According to Ms. Kavanagh, community initiatives such as this are responsible for Ireland’s changing attitudes. “While there is still work to be done on some of the more pervasive aspects of casual ageism, it’s clear that groups such as Older People’s Forums and Active Retirement groups, with their do-it-yourself attitude of empowerment, are doing great work to combat ageism,” she said. “Our Government has pledged to make Ireland the best small country in the world in which to grow old, but it’s communities that are making this happen.” The research report launched by Active Retirement Ireland is available to download from tiny.cc/ageismreport.

Mention this advert for an Exclusive Discount