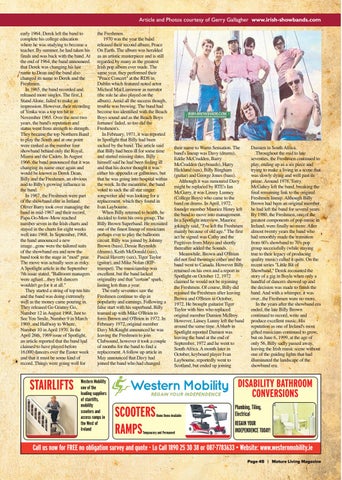 Article and Photos courtesy of Gerry Gallagher www.irish-showbands.com early 1964, Derek left the band to complete his college education where he was studying to become a teacher. By summer, he had taken his finals and was back with the band. At the end of 1964, the band announced that Derek was changing his last name to Dean and the band also changed its name to Derek and the Freshmen. In 1965, the band recorded and released more singles. The first, I Stand Alone, failed to make an impression. However, their recording of Yenka was a top ten hit in November 1965. Over the next two years, the band&#39;s reputation and status went from strength to strength. They became the top Northern Band to play the South and at one point were ranked as the number four showband behind only the Royal, Miami and the Cadets. In August 1966, the band announced that it was changing its name once again and would be known as Derek Dean, Billy and the Freshmen, an obvious nod to Billy&#39;s growing influence in the band. In 1967, the Freshmen were part of the showband elite in Ireland. Oliver Barry took over managing the band in mid-1967 and their record, Papa-Oo-Mow-Mow reached number seven in the Irish charts and stayed in the charts for eight weeks well into 1968. In September, 1968, the band announced a new image...gone were the tailored suits of the showband era and now the band took to the stage in &quot;mod&quot; gear. The move was actually seen as risky. A Spotlight article in the September 7th issue stated, &quot;Ballroom managers were aghast....they felt dancers wouldn&#39;t go for it at all.&quot; They started a string of top ten hits and the band was doing extremely well as the money came pouring in. They released Go Granny Go, Number 12 in August 1968, Just to See You Smile, Number 9 in March 1969, and Halfway to Where, Number 10 in April 1970. In the April 26th, 1969 issue of Spotlight, an article reported that the band had claimed to have played before 16,000 dancers over the Easter week and that it must be some kind of record. Things were going well for

the Freshmen. 1970 was the year the band released their second album, Peace On Earth. The album was heralded as an artistic masterpiece and is still regarded by many as the greatest Irish pop album ever made. The same year, they performed their &quot;Peace Concert&quot; at the RDS in Dublin which featured noted actor Micheal MacLiammoir as narrator (the role he also played on the album). Amid all the success though, trouble was brewing. The band had become too identified with the Beach Boys sound and as the Beach Boys fortunes&#39; faded, so too did the Freshmen&#39;s. In February, 1971, it was reported in Spotlight that Billy had been sacked by the band. The article said that Billy had been ill for some time and started missing dates. Billy himself said he had been feeling ill and that his doctor thought it was either his appendix or gallstones, but that he was going into hospital within the week. In the meantime, the band voted to sack the all star singer songwriter and was looking for a replacement. which they found in Ivan Laybourne. When Billy returned to health, he decided to form his own group, The Billy Brown Superband. He recruited one of the finest lineup of musicians perhaps ever to play the ballroom circuit. Billy was joined by Johnny Brown (bass), Dessie Reynolds (drums), Keith McDonald (sax), Pascal Haverty (sax), Tiger Taylor (guitar), and Mike Nolan (RIPtrumpet). The musicianship was excellent, but the band lacked originality and that &quot;certain&quot; spark, lasting less than a year. The early seventies saw the Freshmen continue to slip in popularity and earnings. Following a false start with his superband, Billy teamed up with Mike O&#39;Brien to form Brown and O&#39;Brien in 1972. In February 1972, original member Davy McKnight announced he was leaving the Freshmen to join Clubsound, however it took a couple of months for the band to find a replacement. A follow up article in May announced that Davy had joined the band who had changed

Western Mobility one of the leading suppliers of stairlifts, mobility scooters and access ramps in the West of Ireland

their name to Warm Sensation. The band&#39;s lineup was Davy (drums), Eddie McCrudden, Barry McCrudden (keyboards), Harry Hickland (sax), Billy Bingham (guitar) and George Jones (bass). Although it was rumoured Davy might be replaced by RTE&#39;s Ian McGarry, it was Linsey Lunney (College Boys) who came to the band on drums. In April, 1972, founder member Maurice Henry left the band to move into management. In a Spotlight interview, Maurice jokingly said, &quot;I&#39;ve left the Freshmen mainly because of old age.&quot; The first act he signed was Cathy and the Fugitives from Mayo and shortly thereafter added the Sounds. Meanwhile, Brown and O&#39;Brien did not find the magic either and the band went to Canada. However Billy returned on his own and a report in Spotlight on October 12, 1972 claimed he would not be rejoining the Freshmen. Of course, Billy did rejoined the Freshmen after leaving Brown and O&#39;Brien in October, 1972. He brought guitarist Tiger Taylor with him who replaced original member Damien McIlroy. However, Linsey Lunny left the band around the same time. A blurb in Spotlight reported Damien was leaving the band at the end of September, 1972 and he went to South Africa. A month later in October, keyboard player Ivan Laybourne, reportedly went to Scotland, but ended up joining

Damien in South Africa. Throughout the mid to late seventies, the Freshmen continued to play, ending up as a six piece and trying to make a living in a scene that was slowly dying and well past its prime. Around 1978, Torry McGahey left the band, breaking the final remaining link to the original Freshmen lineup. Although Billy Brown had been an original member, he had left the band for several years. By 1980, the Freshmen, one of the greatest components of pop music in Ireland, were finally no more. After almost twenty years the band who had smoothly made the transition from 60&#39;s showband to 70&#39;s pop group successfully (while staying true to their legacy of producing quality music) called it quits. On the recent series &quot;Little Bit of Showband,&quot; Derek recounted the story of a gig in Boyle when only a handful of dancers showed up and the decision was made to finish the band. And with a whimper, it was over...the Freshmen were no more. In the years after the showband era ended, the late Billy Brown continued to record, write and produce excellent music. His reputation as one of Ireland&#39;s most gifted musicians continued to grow, but on June 6, 1999, at the age of only 56, Billy sadly passed away, leaving the Irish music scene without one of the guiding lights that had illuminated the landscape of the showband era.