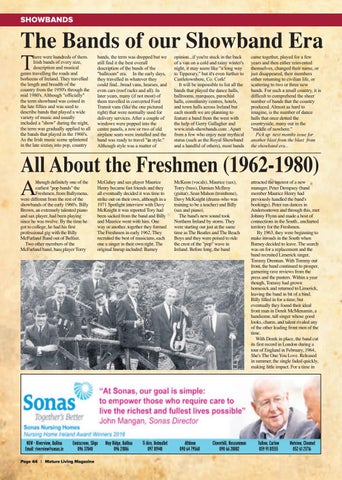 The Bands of our Showband Era T here were hundreds of them. Irish bands of every size, description and musical genre travelling the roads and borheens of Ireland. They travelled the length and breadth of the country from the 1950&#39;s through the mid 1980&#39;s. Although &quot;officially&quot; the term showband was coined in the late fifties and was used to describe bands that played a wide variety of music and usually included a &quot;show&quot; during the night, the term was gradually applied to all the bands that played in the 1960&#39;s. As the Irish music scene splintered in the late sixties into pop, country

bands, the term was dropped but we still find it the best overall description of the bands of the &quot;ballroom&quot; era. In the early days, they travelled in whatever they could find...bread vans, hearses, and even cars (roof racks and all). In later years, many (if not most) of them travelled in converted Ford Transit vans (like the one pictured right) that were normally used for delivery services. After a couple of windows were popped into the centre panels, a row or two of old airplane seats were installed and the band was ready to travel &quot;in style.&quot; Although style was a matter of

opinion...if you&#39;re stuck in the back of a van on a cold and rainy winter&#39;s night, it may seem like &quot;a long way to Tipperary,&quot; but it&#39;s even further to Castletownbere, Co. Cork! It will be impossible to list all the bands that played the dance halls, ballrooms, marquees, parochial halls, community centres, hotels, and town halls across Ireland but each month we are planning to feature a band from the west with the help of Gerry Gallagher and www.irish-showbands.com . Apart from a few who enjoy near mythical status (such as the Royal Showband and a handful of others), most bands

came together, played for a few years and then either reinvented themselves, changed their name, or just disappeared, their members either returning to civilian life, or scattering to two or three new bands. For such a small country, it is difficult to comprehend the sheer number of bands that the country produced. Almost as hard to imagine, is the number of dance halls that once dotted the countryside, many out in the &quot;middle of nowhere.&quot; Pick up next months issue for another blast from the blast from the showband era...

lthough definitely one of the earliest &quot;pop bands&quot; the Freshmen, from Ballymena, were different from the rest of the showbands of the early 1960&#39;s. Billy Brown, an extremely talented piano and sax player, had been playing since he was twelve. By the time he got to college, he had his first professional gig with the Billy McFarland Band out of Belfast. Two other members of the McFarland band, bass player Torry

McGahey and sax player Maurice Henry became fast friends and they all eventually decided it was time to strike out on their own, although in a 1971 Spotlight interview with Davy McKnight it was reported Tory had been sacked from the band and Billy and Maurice went with him. One way or another, together they formed The Freshmen in early 1962. They recruited the best of musicians, each one a singer in their own right. The original lineup included: Barney

McKeon (vocals), Maurice (sax), Torry (bass), Damien McIlroy (guitar), Sean Mahon (trombone), Davy McKnight (drums-who was training to be a teacher) and Billy (sax and piano). The band&#39;s new sound took Northern Ireland by storm. They were starting out just at the same time as The Beatles and The Beach Boys and they were poised to ride the crest of the &quot;pop&quot; wave in Ireland. Before long, the band

attracted the interest of a new manager, Peter Dempsey (band member Maurice Henry had previously handled the band&#39;s bookings). Peter ran dances in Andersontown and through this, met Johnny Flynn and made a host of connections in the South...uncharted territory for the Freshmen. By 1963, they were beginning to make inroads in the South when Barney decided to leave. The search was on for a replacement and the band recruited Limerick singer, Tommy Drennan. With Tommy out front, the band continued to prosper, garnering rave reviews from the press and the punters. Within a year though, Tommy had grown homesick and returned to Limerick, leaving the band in bit of a bind. Billy filled in for a time, but eventually they found their ideal front man in Derek McMenamin, a handsome, tall singer whose good looks, charm, and talent rivaled any of the other leading front men of the time. With Derek in place, the band cut its first record in London during a tour of England in February, 1964, She&#39;s The One You Love. Released in summer, the single faded quickly, making little impact. For a time in