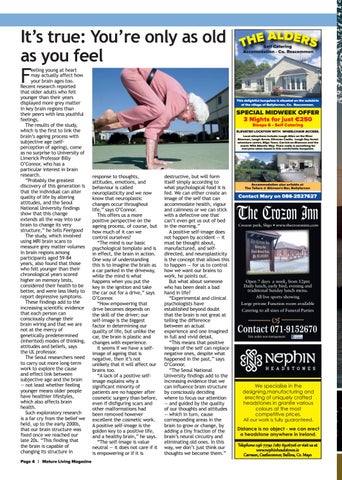 It’s true: You’re only as old as you feel

eeling young at heart may actually affect how your brain ages too. Recent research reported that older adults who felt younger than their years displayed more grey matter in key brain regions than their peers with less youthful feelings. The results of the study, which is the first to link the brain’s ageing process with subjective age (selfperception of ageing), come as no surprise to University of Limerick Professor Billy O’Connor, who has a particular interest in brain research. “Probably the greatest discovery of this generation is that the individual can alter quality of life by altering attitudes, and the Seoul National University findings show that this change extends all the way into our brain to change its very structure,” he tells Feelgood The study, which involved using MRI brain scans to measure grey matter volumes in brain regions among participants aged 59-84 years, also found that those who felt younger than their chronological years scored higher on memory tests, considered their health to be better, and were less likely to report depressive symptoms. These findings add to the increasing scientific evidence that each person can consciously change their brain wiring and that we are not at the mercy of genetically predetermined (inherited) modes of thinking, attitudes and beliefs, says the UL professor. The Seoul researchers need to carry out more long-term work to explore the cause and effect link between subjective age and the brain — not least whether feeling younger means older people have healthier lifestyles, which also affects brain health. Such exploratory research is a far cry from the belief we held, up to the early 2000s, that our brain structure was fixed once we reached our late 20s. “This finding that the brain is capable of changing its structure in Page 4 | Mature Living Magazine

This delightful bungalow is situated on the outskirts of the village of Ballyfarnon, Co. Roscommon.

ELEVATED LOCATION WITH WHEELCHAIR ACCESS. Local attractions include: Lough Allen on the River Shannon, Lough Arrow, Kilronan Castle, Lough Key forest adventure centre, Sligo Town, Carrick-on-Shannon and the scenic Wild Atlantic Way. There really is something for everyone when based in this comfortable bungalow.

response to thoughts, attitudes, emotions, and behaviour is called neuroplasticity and we now know that neuroplastic changes occur throughout life,” says O’Connor. This offers us a more positive perspective on the ageing process, of course, but how much of it can we control ourselves? “The mind is our basic psychological template and is in effect, the brain in action. One way of understanding this is to imagine the brain as a car parked in the driveway, while the mind is what happens when you put the key in the ignition and take the car out for a drive,” says O’Connor. “How empowering that drive becomes depends on the skill of the driver; our self-image is the biggest factor in determining our quality of life, but unlike the car, the brain is plastic and changes with experience. It seems if we have a selfimage of ageing that is negative, then it’s not unlikely that it will affect our brains too. “A lack of a positive selfimage explains why a significant minority of patients are no happier after cosmetic surgery than before, even if disfiguring scars and other malformations had been removed however excellent the cosmetic work. A positive self-image is the golden key to a positive life, and a healthy brain,” he says. “The self-image is value neutral — it does not care if it is empowering or if it is

destructive, but will form itself simply according to what psychological food it is fed. We can either create an image of the self that can accommodate health, vigour and calmness or we can stick with a defective one that can’t even get us out of bed in the morning.” A positive self-image does not happen by accident — it must be thought about, manufactured, and selfdirected, and neuroplasticity is the concept that allows this to happen — for us to control how we want our brains to work, he points out. But what about someone who has been dealt a bad hand in life? “Experimental and clinical psychologists have established beyond doubt that the brain is not great at telling the difference between an actual experience and one imagined in full and vivid detail. “This means that positive images of the self can replace negative ones, despite what happened in the past,” says O’Connor. “The Seoul National University findings add to the increasing evidence that we can influence brain structure by consciously deciding where to focus our attention — and guided by the quality of our thoughts and attitudes — which in turn, cause corresponding areas in the brain to grow or change, by adding a tiny fraction of the brain’s neural circuitry and eliminating old ones. In this way, we don’t just think our thoughts we become them.”

We specialise in the designing,manufacturing and erecting of uniquely crafted headstones in granite various colours at the most competitive prices. All our work is fully guaranteed.

Distance is no object - we can erect a headstone anywhere in Ireland.