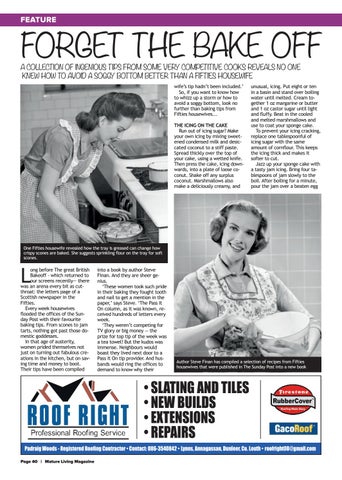 Forget tHe Bake oFF a collection oF ingenious tips From some very competitive cooks reveals no one knew How to avoid a soggy Bottom Better tHan a FiFties HousewiFe wife’s tip hadn’t been included.’ So, if you want to know how to whizz up a storm or how to avoid a soggy bottom, look no further than baking tips from Fifties housewives... THE ICING ON THE CAKE Run out of icing sugar? Make your own icing by mixing sweetened condensed milk and desiccated coconut to a stiff paste. Spread thickly over the top of your cake, using a wetted knife. Then press the cake, icing downwards, into a plate of loose coconut. Shake off any surplus coconut. Marshmallows also make a deliciously creamy, and

unusual, icing. Put eight or ten in a basin and stand over boiling water until melted. Cream together 1 oz margarine or butter and 1 oz castor sugar until light and fluffy. Beat in the cooled and melted marshmallows and use to coat your sponge cake. To prevent your icing cracking, replace one tablespoonful of icing sugar with the same amount of cornflour. This keeps the icing thick and makes it softer to cut. Jazz up your sponge cake with a tasty jam icing. Bring four tablespoons of jam slowly to the boil. After boiling for a minute, pour the jam over a beaten egg

One Fifties housewife revealed how the tray is greased can change how crispy scones are baked. She suggests sprinkling flour on the tray for soft scones.

ong before The great British Bakeoff - which returned to our screens recently— there was an arena every bit as cutthroat: the letters page of a Scottish newspaper in the Fifties. Every week housewives flooded the offices of the Sunday Post with their favourite baking tips. From scones to jam tarts, nothing got past those domestic goddesses. In that age of austerity, women prided themselves not just on turning out fabulous creations in the kitchen, but on saving time and money to boot. Their tips have been compiled

into a book by author Steve Finan. And they are sheer genius. ‘These women took such pride in their baking they fought tooth and nail to get a mention in the paper,’ says Steve. ‘The Pass It On column, as it was known, received hundreds of letters every week. ‘They weren’t competing for TV glory or big money — the prize for top tip of the week was a tea towel! But the kudos was immense. Neighbours would boast they lived next door to a Pass It On tip provider. And husbands would ring the offices to demand to know why their